Freelance journalist David Donaldson says the incoming Abbott government will have to balance the free-trade ethos of the Liberals with the protectionism of the Nationals. It won't be easy. 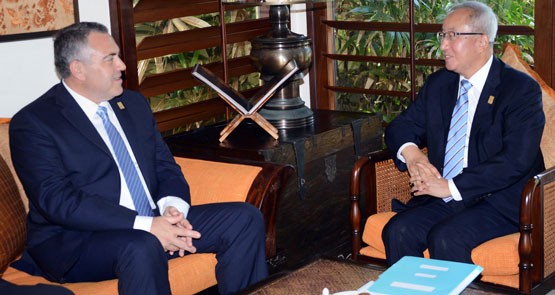 Tony Abbott says Australia is once again “open for business”, signalling the finalisation of multiple bilateral free trade agreements as a key economic goal for the incoming Coalition government. But the government faces challenges not only in reaching agreements with regional partners, but also in dealing with anti-free trade sentiment in the National Party.

The new Prime Minister stated this week he wanted “people here and abroad to understand that Australia welcomes foreign investment”, suggesting he will make an early effort to achieve progress on FTAs currently under negotiation with China, Japan, and South Korea. But in a bid to contain protectionist anxiety within the Nationals, Abbott qualified his position: “It’s got to be the right foreign investment, which is in our national interest, but one thing we can’t do is build walls against the world.”

The highest-profile of Australia’s FTAs currently under negotiation is our agreement with China. Australia was the first country to announce bilateral FTA negotiations with China in 2005, but slow progress has meant that now Australia lags behind New Zealand, Chile and the Association of Southeast Asian Nations states, which have all concluded agreements in the meantime. Practically, this has meant that New Zealand agricultural products, for example, enjoy a 10-15% price advantage over Australian goods.

Australia’s difficulty in concluding an FTA with China stems from our insistence on pushing for a comprehensive and liberalising agreement that would not allow exclusions for industries politically sensitive for China. Former Australian ambassador to China Geoff Raby has argued that Australia would likely only conclude an FTA with China if it lowered its expectations on market access for sugar, wool and banking.

In a move likely to throw a spanner into the works, the Coalition has announced plans to lower the threshold at which the government can choose to block foreign acquisitions found not to be “in the national interest” from the current $248 million to $15 million. China wants this number lifted to $1 billion, in line with standards enjoyed by US and NZ companies under Australia’s bilateral FTAs with those countries. Whether this is a core requirement for China or a clever negotiating tactic remains to be seen, but there’s the chance this could become a big problem within the Coalition.

Monash political science academic Dr Nick Economou thinks the Lib-Nat split on foreign investment could become the biggest source of tension within the Coalition, as Abbott is forced to “find the middle ground” between free marketeers like Trade Minister Andrew Robb “and the rural populists snapping at their heels”, such as Agriculture Minister Barnaby Joyce who has been campaigning heavily to restrict foreign investment in agricultural land in recent months. Chinese companies in particular have been subject to protectionist scorn.

“It is interesting that the trade ministry has gone to a Liberal in Andrew Robb,” Economou said. “This is a move clearly designed to sideline Barnaby Joyce.”

Less controversial in Australia, but nonetheless difficult, will be Australia’s negotiations with our second-largest trading partner, Japan. The island nation is the destination for one-third of Australian beef exports, but is also home to a competitive car industry. Renowned for its protectionist approach to agriculture, Japan’s highest tariff on rice currently sits at 778%. Given that China already has comparatively low tariffs without having an FTA in place, Professor Peter Dixon of Monash University says Japan is crucial. “It is pretty important that our commodities get into Japan on as favourable terms as possible, especially our agricultural exports,” he said. Resource-poor Japan is also the world’s largest important of liquid natural gas and will likely increase its energy imports if nuclear power remains politically unpalatable.

Beef and vehicles are the two main points of contention in talks. Earlier this year The Australian reported that Australian beef farmers were worried the government was trading off lower tariffs on beef to protect the Australian car industry. Abbott announced this week that the Coalition intended to be less generous in its support for the car industry, so if this translates into negotiations, the new government may find it easier to reach agreement with Japan than Labor did.

Next on the list is our fourth-largest trading partner, South Korea. Negotiations with South Korea were launched in 2009 by Kevin Rudd and then-president Lee Myung-bak. The main roadblock has been a disagreement over investor-state dispute settlement, a model of arbitration opposed by Australia and favoured by the Koreans. Neglecting to reach a swift agreement with Korea will cement Australia’s comparative disadvantage, as Korea has already concluded FTAs with the European Union, the US and Chile. Australian exporters, particularly of beef and wine, have already lost ground to countries with lower tariff rates. Korean companies are reportedly eager to invest in the Australian resources sector.

Negotiations are also progressing with our eighth-largest trading partner, India. Started in 2011, these talks are still in their relatively early stages. While India, which still maintains many restrictions on trade and investment, seeks to enhance its energy security through greater access to Australian gas and coal exports, Australia is eyeing Indian markets in services, food and pharmaceuticals. Apart from seeking lower barriers to trade, Australia is hoping India will agree to enhance its regulatory transparency.

I hope that whatever FTA’s they come up with are more beneficial to us than the one the National’s Mark Vaile came up with with USA.

Abbott’s “open for business” is straight from the (paleo) neo-con playbook, a’la Raygun’s “Morning in Amerika!”.
Both meaningless, feel good dog whistles – though more subtle/slightly less sinister than the previous UK tory campaign slogan “Are You Thinking What We Are Thinking?”.
The perfect Oz tory slogan was in the 80s with Peacock’s self ablating, “The Answer os Liberal” to which the obvious riposte was “It must have been a rilly, rilly stoopid question.”

It is my impression that Australia is a relatively free and open society where it is relatively easy to come and conduct business. Language & culture plays a role here.

I read somewhere that HongKong, Singapre NZ & Australia are easily in the top 10, always, of free trade societies. All were former British colonies.

My point is that as we already are negotiating from a very free & open position, with very little manufacturing left to protect and export industries all mostly primary products; we have little left to negotiate away as far as blockers to free trade. Again I emphasise that this is my perception that the present world trade system seems to favour closed societies such as oriental one’s; rather than free & open societies such as anglo celtic or english speaking societies.

I believe there are benefits from free trade and one of them is that our society does not have the same economic structural problems that come with protection & subsidies.

This perception of unfairness means that maybe politically the Australian public sees free trade agreements as hurting Australia rather than benefiting Australia. In other words no matter how much we stick to purest free trade dogma. Nobody else will, making all these negotiations a waste of time and monies. Just an opinion. I would like to see someone argue that Australia will get a level playing field rather than a permanent lopsided one against Australia.

I am no expert, so my above heavily qualified assertions get following support, that Australia is already practising free trade, others need to catch up.

above is a ranking , kind of, of facilitating free trade between countries. Just in case someone says that Australia is protectionist. I consider/believe we are open enough and don’t need to negotiate away more without a more level playing field.

Once again there is a lack of concentration on the value of an FTA with Indonesia. To be fair it is not scheduled to be called an “FTA” as it will be named a “comprehensive economic partnership agreement”. These FTA’s will greatly assist our primary producers such as those constituents that voted for Barnaby and others in the LNP. It is important however that the Australian government acknowledges the challenges of negotiating such agreements, and is prepared to forego some of our requirements, in order to get some wins. Lets hope that the new government can be more forward thinking and pragmatic on the issue. It is certainly complicated.