Germans are heading to the polls this weekend in what could be a very close contest. It's about Merkel, austerity, and Europe. 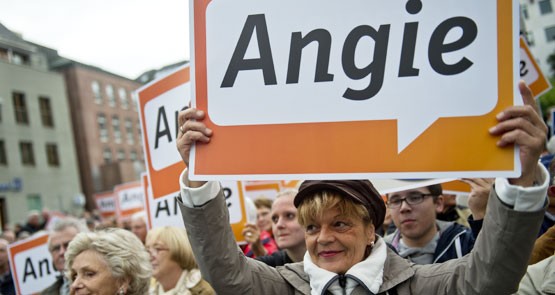 It’s been a lean few years in Europe: the recovery from the global financial crisis has been slow and painful, and is still very much incomplete. But some countries have done better than others, and this weekend we’ll see whether the voters in one of the strongest economies, Germany, choose to reward its centre-Right government or try something different.

Chancellor Angela Merkel has been in office since 2005 but only fully in power since 2009; her first four years were in a grand coalition with the centre-Left Social Democrats. So when Germans go to the polls they will be passing judgement specifically on the last four years — a time when Germany’s role in Europe is top of mind.

Merkel’s government has been the leading proponent of austerity as the way out of the crisis, and it’s partly through her agency that such policies have been imposed on the troubled economies of southern Europe, most notably Greece. Merkel is personally identified with this — commentators often point to her puritan instincts, supposedly drawing on her father’s career as a Protestant pastor — but it also appeals to attitudes widespread in northern Europe.

But austerity has divided European opinion and raised long-dormant questions about German arrogance and overreach. If Germans are uncomfortable about the way in which they have become resented in Greece and elsewhere, a change of government would be a pretty obvious way to address it.

The response to the GFC is inseparable from the question of European integration. Germany has long been a strong supporter of greater EU power, so it’s not really surprising that the German response to the Greek crisis was not to pull back from monetary and fiscal integration but to push forward — to try to bring the spendthrift southern Europeans more firmly under the control of the virtuous northerners.

Nor is it likely that if Peer Steinbruck and his Social Democrats take power in Germany there will be any radical change in outlook — such views largely transcend party politics. What critics of austerity are hoping for is that Germany will use its leading role to loosen the purse-strings a little and encourage the European Central Bank to adopt a more expansionary attitude.

Such a shift is a distinct possibility. Although Merkel’s party, the Christian Democrats, have continued to poll well (see recent opinion polls here), her junior coalition partners, the Liberals or Free Democrats (FDP), have lost more than half their support and are at risk of disappearing from Parliament altogether. (as explained in a blog post last week).

This in turn is symptomatic of a European trend: free-market liberal parties, having enjoyed something of a heyday a few years ago, are now suffering from having become too closely identified with the political Right. Britain’s Liberal Democrats are the most familiar case of this, where coalition with the Tories has sent their support into freefall, but the FDP has had a similar experience.

In 2005, when Merkel first won office, the FDP had an opportunity to change the political narrative by joining a broad “traffic light” coalition with the Social Democrats and the Greens. But it stayed out, stressing its pro-business themes and less its social liberalism, just as corresponding parties across Europe were tending to do. That worked well in the short-term (2009 was its best-ever result), but now it’s paying an electoral price.

It’s perhaps a little ironic that an election that is, at least in part, about European integration, might turn on the fact that Europe is already sufficiently integrated that political trends do seem to operate across the continent.

For the last two years, the European Left has been on the comeback trail. From a low point in 2011, when it was out of office in all the major European economies, it has picked up half-a-dozen EU members, including the major prizes of France and Italy (although its own ineptness in Italy obliged it to accept a grand coalition).

It’s quite possible, however, that Germany will be a bridge too far. The three opposition parties — the Social Democrats, the Greens and the Left — may have difficulty forming a workable coalition even if they snare a majority between them, and if the FDP scrapes back into Parliament then the government may yet be able to carry on with a small, workable majority.

After a slight dip in the polls last week, the Christian Democrats still seem to be hovering steadily around 40%, while the FDP seems to have gained slightly at the expense of the Greens.

Either way, some softening of austerity is probably on the way, but an assertive Germany is likely to remain — whether under a returned if chagrined Merkel, or a red-Green alternative.