The government has changed the shape of the public service. Governance expert Stephen Bartos argues this mostly makes sense, but PM&C taking on indigenous affairs could backfire. 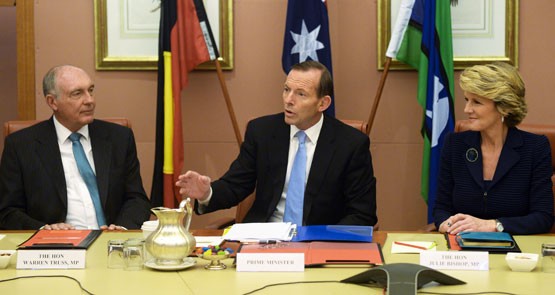 The Administrative Arrangements Order is one of the dullest but most important government documents. It lists departments, the matters they deal with and the legislation they administer. It may appear as a long, boring list, but it has huge consequences for staffing, location and leadership. The AAO issued by the new government yesterday changes the machinery of government in some important ways.

Bringing tertiary education back into the Education Department is a sensible move, allowing better policy development over the whole of education. But leaving vocational education behind in the Industry Department leaves that function as an outlier which may lose focus and direction. This could be the intention, if the long-term goal is for VET to be left entirely to the states and territories, but makes for an uncertain period ahead. Industry itself will have more than enough to worry about — it has the largest span of responsibilities of any department, a full A4 page.

The move of sport to Health on the surface seems logical, on the presumption that sport makes people healthy. Digging deeper, it’s worth noting that Commonwealth involvement in sport up has been mostly about elites, including bodies such as the Australian Sports Commission and sports anti-doping authority. It will be interesting to see if funding is diverted from these to grassroots community sports that have more obvious health benefits.

AusAID is now part of the Foreign Affairs Department, so that aid priorities can be more closely aligned to diplomatic interests. In the Fairfax press today World Vision’s Tim Costello argued this was a worrying move but distanced himself from those he termed “purists” who argue that aid should be solely about reducing poverty. Australia’s aid program has never been that pure: it always had strong foreign policy interests. The machinery of government change is simply acknowledging the fact. Indeed Australia is less aggressive than many countries in using aid to pursue foreign policy (China quite openly expects its aid recipients in the Pacific to support it on various diplomatic causes).

“There is a big risk ahead for the Prime Minister’s own department, Prime Minister and Cabinet, in being given indigenous policy …”

If the move of AusAID delivers a greater focus on aid effectiveness it will be a big improvement in public administration. It may also help address the practice, condemned in past reviews, of millions of aid dollars being channelled through companies staffed primarily by former AusAID officials who take a generous cut on the way through. However, being in a bigger portfolio without a separate spotlight might perversely allow such practices to be swept under the carpet.  If the Parliament is alert to this possibility, DFAT can expect a much more rigorous going-over from Senate committees.

There is a big risk ahead for the Prime Minister’s own department, Prime Minister and Cabinet, in being given indigenous policy and service delivery. This department is exceptionally good at fighting fires and producing what ministerial staff call “announceables”. If you want a multi-billion-dollar policy statement in the next three weeks, they are the ones to go to. It has never been noted for putting in long, hard yards in implementation. Yet that is exactly what indigenous policy requires. Abbott has demonstrated that he wants to achieve something with indigenous affairs. He plans to spend a week a year in an indigenous community, and has a track record of working at indigenous communities. He is not going to look favourably on his department if it fails to deliver.

There have been some secretary changes, but the head of the Prime Minister’s Department, Dr Ian Watt, remains. With both of the two new departmental secretary appointments coming out of PM&C, it seems Watt is intending to stay in charge of the public service and put his mark on it. While a stint in PM&C has in the past been one of several possible routes to head a department, today it has become a necessity. It was a practice favoured by Max Moore-Wilton when he headed PM&C in the Howard government — where one of his deputies (who became a departmental head) was Watt.

There were also some secretarial sackings, as Bernard Keane discusses in Crikey today.

In deciding on a simpler set of departmental titles, Abbott has done us all a favour. There is a virtue in clarity and simplicity. Science spokespeople should stop worrying about whether they have a minister. Clearly they do, and a very powerful one, in Ian Macfarlane. Nagging about science tertiary education being moved to the education department is like lawyers complaining that university law schools aren’t funded out of the Attorney-General’s Department. What matters is what gets done; coming over as precious about the symbolism of a departmental name is crazy strategy, likely to irritate the government. We have not seen minerals, energy or food processors (all in the Industry Department) complaining that they are not in its title.

The one area where the government has eschewed simplification is spelling. A sharp-eyed Crikey reader has noticed that the AAOs now use “programme” instead of “program”. The anonymous tipper suggests those extra two letters “could get tricky, if the new ministers pick up where their Howard-era predecessors left off, and restrict briefings to one page briefs”.

Aid for checkpoints? The militarisation of Australia’s aid

Is the World Bank failing girls and kids with disabilities?

What I found interesting in reading through the Administrative Arrangements was that there is no mention of responsibility for the Living Longer, Living Better legislation.

abbott has taken on ‘Women’s Affairs’ portfolio – is this pure irony, hilarity, or does abbott think it will help him stop women having affairs?

“What matters is what gets done,” not the symbolism of departmental naming. Very well, let us judge the Liberals by their science policy.

Apart from a commitment to spend $200M on research into dementia and Alzheimers, and $42M expanding the Institute for Tropical Medicine at James Cook University, the Liberals have no science policy.

Ian McFArlane achieved precisely zero in Abbott’s time and it was P M & C in Howard’s time who didn’t notice dozens of cables stating that AWB were stealing $300 million from the Iraqi people and giving it to Saddam Hussein.