The market stays steady, as resources companies re-organise their assets. 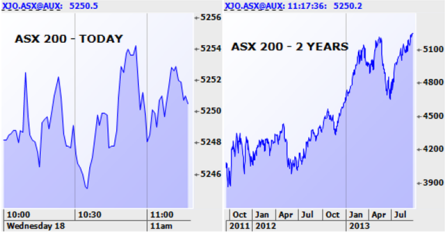 The market is down one point. Dow Jones was up 35. It was up 60 at best. Very low volume ahead of the FOMC decision.

The oil price fell 1.1%. Deutsche Bank says that whilst the potential for a military strike against Syria has eased a supply problem still prevails in Libya.

A$ up again to 93.57c. The Euro up for the 6th day on the trot and the GBP up for the 10th time in 12 sessions as the US$ continues to fade on tapering expectations.

FOMC Meeting in progress — two day meeting — the statement will be out tomorrow morning 4am our time followed by a Bernanke press conference half an hour later.