O’Brien uncut on speakers’ circuit. Kerry O’Brien, who gave his swansong as ABC election-night anchor earlier this month, is off the leash — he roasted Prime Minister Tony Abbott in a speech last night for being negative and defensive. O’Brien, who emphasised that he was giving his own views and not those of the ABC, said “three years of negative campaigning from opposition is not a healthy development”. Gough Whitlam’s former press secretary lamented the nature of modern politics and its “mindless obsession with control”. He described it as wrong, boring, destructive and sad.

O’Brien pondered whether the ALP would follow Abbott’s lead on negativity in opposition. “I think a leader could smash this culture in a minute,” he told the Wheeler Centre audience, but added that of the two contenders for the Labor leadership, Anthony Albanese and Bill Shorten, “neither is an exciting option”. He suggested great leaders might emerge through circumstance.

O’Brien, who hosted his 10th and final election night program for the ABC on September 7 but remains with the network as Four Corners anchor, did not spare the ALP from his views. He said it was a “massive mistake” to remove Kevin Rudd, as there was every reason to think he would have won the 2010 election. O’Brien also criticised The Australian journalist Chris Kenny for campaigning against the ABC through the pages of his newspaper, “boringly”.

The man known to some as Red Kerry was cheered by the adoring Melbourne audience, largely comprised of women of a certain age. His criticism of the Coalition was well-received, leading him to joke: “was there a filter at the door?” — Cathy Alexander

Archer hits gender culture. How’s this for a contents page: homos-xuality in Aboriginal culture, adult desire for youth, why straight s-x is just as queer, and the etiquette of hook-up beats. New Australian journal Archer aims to capture a snapshot of Australia’s attitude to s-xual diversity. Best-selling author Christos Tsiolkas leads a roster of writers for the first edition, which is being edited by Melbourne journalist Amy Middleton. She said:

“Each issue of Archer will date quickly in terms of commentary and photography, leaving behind a relic of the s-xual equality movement. The response to Archer so far has been so positive — I think most people agree that a new media outlet that deals with these issues is vital in Australia right now.”

Middleton is using crowdfunding platform Pozible to raise funds to print the edition. It has a target of $20,000 and nine days to go; about half has been pledged. — Jason Whittaker

Potheads cut northern lights. Looks like someone at the Townsville Bulletin or local electricity mob Ergon Energy was a bit indecisive about who to really pin this power outage on … 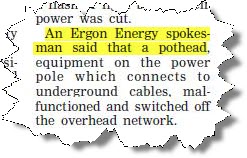 Front page of the day. Not again, indeed. Of all the front pages on the Navy shooting spree in the United States capital, the Philadelphia Daily News captured it best … 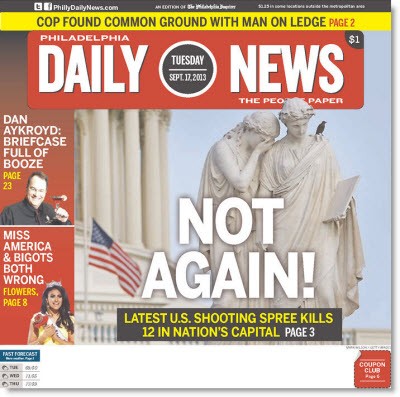 Onya Liam Kenny! About time some one gave your old man a serve!!