Love will tear us apart at Albo’s campaign launch

Plenty of old and new Laborites at Anthony Albanese's campaign launch, but do the rank-and-file actually have any real say in who will be the leader? 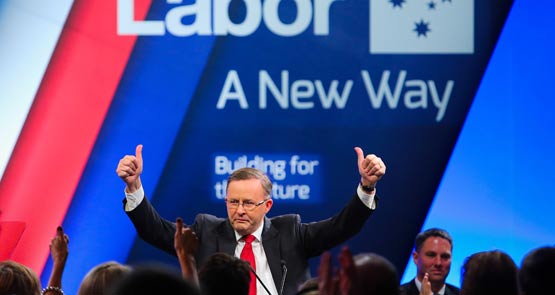 Some 300 people packed into Sydney’s Trades Hall last night to down a few Crown Lagers with the true believers and celebrate the latest Labor triumph: the chance to vote on the new Labor leader. For the first time since the election, Laborites felt good about politics — look, we are enfranchised! We can vote again, for one of the good guys!

But isn’t it all a bit premature? There were about 40,000 members of the ALP on the day of eligibility, September 7, and there are 80-odd members of the Labor caucus (final numbers are still being calculated). The membership vote and the caucus vote have equal weighting, with the prediction that the members will vote for leftie Anthony Albanese and the caucus will go for Bill Shorten, from the Right.

If I were a member of the ALP (which I’m not), I’d be insulted by the fact that Stephen Conroy’s vote was worth about 450 times more than mine. If the ALP is serious about opening the door to this cutting-edge concept of democracy, shouldn’t every vote be given equal weighting? If about 88 votes are worth the same as 40,000, do the members seriously believe they are being given an equal say?

Conroy, one of the “factional warlords” of the party, has come out against this democratic fig leaf, which probably explains why it should be supported. Anything that diminishes the power of someone whose sole qualification for office is counting numbers has got to be a good thing. Incidentally, have all those people slamming the Coalition this week about “merit” cast their eyes over the Labor benches? How do you explain Joel Fitzgibbon and Kim Carr?

Albo’s biggest celebrity supporter, Russell Crowe, wasn’t there last night, but there were plenty of other well-known faces, including former health minister Tanya Plibersek, who has been touted by both sides as a potential deputy leader.

In his speech, Albo said: “I’m putting myself forward because I have got the vision, I can bring unity to the party, and I have the strength that’s required to take on Tony Abbott and bring him down in one term!” (Cue tumultuous applause.)

All in all, it was like a cross between the front bar of the Petersham Bowling Club and Rats in the Ranks — in fact, I saw the star of that documentary, Larry Hand, still wearing the signifier of the aging inner-city leftie — the leather bomber jacket.

“This election is an interesting experiment, but it could be like winning the title of George Clooney’s Latest Girlfriend.”

Most popular attendee was federal Senator Doug Cameron, who performed his new magic trick of inducing ovulation in every female within 25 metres. Since his stunning appearance on the ABC’s Kitchen Cabinet, in which he admitted to being so nervous about the meal he “couldna sleep a wink,” Cameron’s fan base has expanded beyond the membership of the AMWU to include any woman with a pulse. If he stood for Labor leader wearing a kilt, he’d win.

All up, this election is an interesting experiment, but it could be like winning the title of George Clooney’s Latest Girlfriend. You’ve made the cut, but let’s face it, he’s never going to put a ring on it, is he? As my colleague Bernard Keane has pointed out, only three federal and state first-term opposition leaders have won office in Australia in the past 20 years after uninterrupted stints in the job. If Albo gets in, would he be just warming the seat for Bill?

We will all know the result later next month, but in the meantime, anyone wanting to know more about Albo should iView the special political edition of Rage, broadcast on the ABC on August 31. Along with Greens Deputy Leader Adam Bandt and new Foreign Minister Julie Bishop, he programmed a total of 20 songs, which included The Triffids’ Wide Open Road and New Order’s Blue Monday.

Last night, we saw a photo montage of the prospective leader, set to the tune of one of his picks on Rage, the Killers Mr Brightside:

Personally I much prefer Albo’s other selection, which was Joy Division’s  Love Will Tear Us Apart, a song always on my own election-night playlist:

Margot, surely as someone who is NOT a member of the ALP, you would agree that you don’t actually get to have an opinion about this?

Media needs to be perceived as unbiased to garner credibility from all sectors of political beliefs. To its credit Crikey often fulfils this dictum. In this instance, perhaps Margot Saville is writing somewhat tongue in cheek; I don’t know. However, seldom have I read such a Sydney-centric, biased, born to rule and snobbish article as this in Crikey.

What’s wrong with the kilt, Margot? Your comment sounds like a put down. My husband is a Scot, so I find kilts very fetching!!
Good on you, Senator Doug!!!

It must have been a stressful night for Albo. No doubt he would have taken that well worn path down New Canterbury Rd Dulwich Hill to let off some “steam”.