It's inauguration day -- minus the pomp. How governments change: Bernard Keane goes behind the scenes. We find some women for Tony Abbott to promote. Anthony Albanese rallies his faithful. Who'll replace Ben Bernanke at the Fed: a Crikey form guide. And those "cardigan-wearers" at the Press Council.

Barnaby Joyce caught a maxi-taxi to transport his brood. Mathias Cormann’s little one wore a fetching bonnet; Greg Hunt’s daughter took the oath alongside dad. Navy-clad Julie Bishop’s lovely soprano voice, among a sea of men, barely cut through on the singing of the national anthem. Margie Abbott shed a tear, as Tony’s three daughters and two parents beamed with pride. 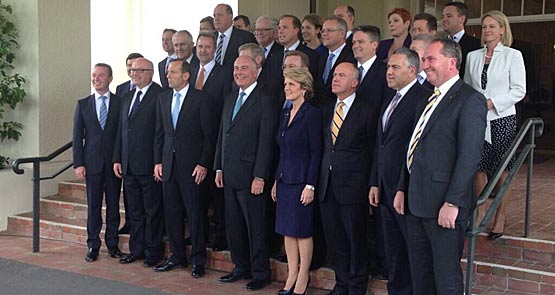 With barely any ceremony, and a decided lack of pomp, Australia finally has a new government. The revelation of middle names –Malcolm Bligh Turnbull; Warren Errol Truss; Michael Fayat Keenan — is the only note of interest in a dull ceremony tucked away in Government House that the public can only witness via TV news channels.

Where’s the parade down Commonwealth Avenue? The black-tie balls? The soaring speech from Abbott on his agenda?

Meanwhile, as newly sworn-in ministers enjoyed tea and scones with the Governor-General, public servants were moving desks, packing boxes, changing passwords and, for some, worrying about their futures. Three department heads were sacked this morning; another will walk next year.

That’s the changing of the guard in Canberra: brutally efficient.

I hope they are overthrown in three years or less!
From what we have heard so far, it is all disaster for our country and the planet.

The new PM gave as soaring a speech as he could, given the paucity if the vision thang so we heard the same sloganeering he used at the Coalition launch recently.
Bop the Stoats, Axe the Tax, Cut the Waist(line?) and err.. that’s it folks.
Welcome to Dystopia, power without principle, profit without provision.