Until men are actually promoted on merit, there's no reason why women should have to be. True equality is as many mediocre women in positions of power like federal cabinet. 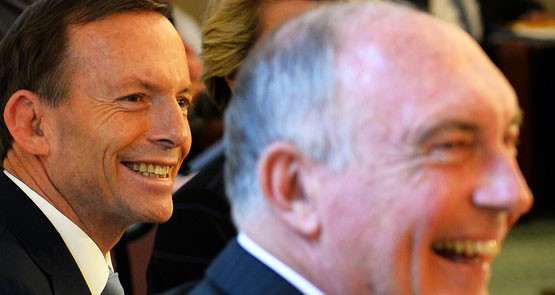 There’s an old piece of early 1930s newsreel footage I saw in a documentary somewhere that features Mahatma Gandhi visiting Britain for the very first time. With his classic white loincloth and round glasses on the end of his nose, he is an exotic sight amongst the British newspapermen (they’re all men, of course).

One of the journalists yells out a question: “Mahatma, what do you think of Western civilisation?” He responds: “I think it would be a very good idea.”

And that is precisely what I think when I hear people talking about promotion on merit. I am all for it, but I see absolutely no evidence of it occurring at the moment. If you doubt me, just think for a second of all the places you have ever worked. Think of all the people in authority you have ever had dealings with. Now tell me, hand on heart, that all of those people got to the top purely on merit. I sometimes think I have met more idiots at the top than I ever have at the bottom but, to be fair, that’s probably because idiots with power are far more of a problem than idiots without it.

What I notice about people at the top is not their merit, but how similar they are. If we really do promote on merit, as so many claim, then merit is astonishingly concentrated among white, middle-class, private school-educated men. (Someone claimed last night on Twitter that there were more ex-students from Riverview in the Abbott cabinet than women.) This is either a biological and evolutionary reality that is well worth scientific evaluation or a rather stark demonstration of bias. This doesn’t mean that people who fit the above description have no merit but simply that they may not have quite the stranglehold on it that many of them appear to assume.

Because that’s another thing that is a little revealing about the claims by some that — much as they’d like to help women — they “prefer” to promote on merit. Those who like to congratulate themselves on such exceptional fair-mindedness and commitment to excellence are so often members of the very same group that they think has all the merit! Another quite remarkable coincidence (honestly, I think there must be a few potential PhDs in this).

When anyone suggests that it is “tokenism” to include members of “minority” groups simply because of their gender or ethnicity — indeed, that it might even be “insulting” to do so — I am reminded that women are not a minority group. In fact, they make up the majority of Australians. Mind you, if you are one of those people with merit, it is an understandable mistake on your part because one place where women are always a minority, of course, is in any corridor of power. Wherever there is an underpaid, overworked and undervalued workforce, on the other hand, they are in the majority. Not because there is any systemic bias or prejudice, presumably, but because they lack merit.

“Quotas are not new. Indeed, until relatively recently, there was a worldwide 100% quota that reserved all positions of power, authority and privilege for men.”

There is also an enormous fear of quotas to help get more women into positions of power. This is also curious to me. Quotas are not new. Indeed, until relatively recently, there was a worldwide 100% quota that reserved all positions of power, authority and privilege for men. This was regarded as natural, normal and unexceptional.

Even in our very own federal cabinet, quotas are in existence. I heard a discussion about how difficult it was to select a new ministry given how the PM had to balance the required number of ministers from Queensland, Western Australia, Tasmania, etc, plus the required number of National Party people. Um, sorry, pardon my ignorance (perhaps its my vagina-owning lack of merit), but aren’t they quotas? Do the ministers from Queensland feel patronised that they might have got their cabinet positions based on their location, not their merit? (I’m not going to ask if the National Party members feel patronised; I am sure they do, all the time.)

Many boards in the private sector have similar interstate quotas so — pardon my presumption — why is it only quotas for women that are so unacceptable? Indeed, one could ask why it is only women who appear to have to earn their place at the decision-making tables by proving their merit at all.

Until men are actually promoted on merit I see absolutely no reason why women should have to be. In fact, I believe we will only have true equality when there are as many mediocre women in positions of power as there currently are mediocre men. And if you’d like to see just how mediocre things can get, look no further than our new federal cabinet.

Don’t you promote the idiots out of the way, to free up the competent to do the actual work?

A slight problem in the first paragraph. Gandhi was a law student in London between 1888 and 1891. Otherwise a great article.

Great Article. I was unaware that there were quotas for each State.

Either rename ‘Crikey’ ‘Men’s Agenda’ or start publishing these sorts of articles directly in Crikey and Scrap the ‘Women’s Agenda’ site. I know you need the ad revenue but it is another example of treating your female readership as a minority.