Abbott delivers voters what he promised: a dearth of women

There can be no complaints about the lack of women in Tony Abbott's cabinet: it's exactly what he promised voters. The Liberals and Nationals have long had a woman problem. 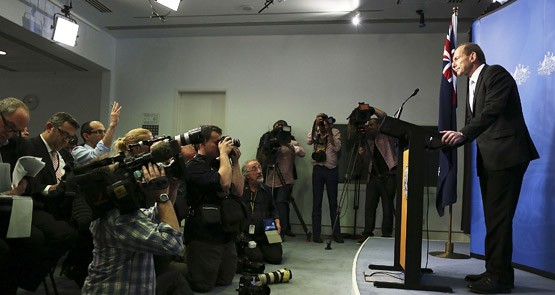 The angst over the lack of women in Tony Abbott’s cabinet is one of the more perplexing political reactions of recent years.

Unveiling his cabinet yesterday, the new Prime Minister gave us more or less what he said he would: the same frontbench he’s had since 2010. There have been a few adjustments amid the continuity: Mathias Cormann (inexplicably) gets promoted, a couple of frontbenchers like Ian Macdonald have hit the fence, but it’s by and large the same team Abbott has had since the last election.

And on gender, the only difference in cabinet is that Sophie Mirabella, whom the entire Left in Australia (as well as plenty of Liberals) are death-riding in Indi, isn’t there. That means the representation of women in cabinet drops from two out of 20 to one out of 19. In the outer ministry, four out of 12 shadow ministers were women, and four out of 11 ministers are, although Bronwyn Bishop has been expunged and given the Speakership, amid the usual hilarious incantations that all incoming governments make about wanting to improve the standard of debate. The only difference is among Abbott’s parliamentary secretaries: three out of 15 opposition parliamentary secretaries were women; one out of 12 are in government.

So Abbott has delivered exactly what he promised voters: very few women. Having promised a “no surprises” government, there should be no surprise when he does just that.

Did people not notice this about his frontbench earlier? Did people not notice, indeed, that the Coalition’s ranks before the election included just 21 women in total? John Howard used to proudly boast of how the Liberal Party would never use “patronising quotas” to lift the proportion of women in its ranks; the number of Liberal women in the House of Representatives peaked in 1996 and declined  thereafter. That’s why Julie Bishop is now easily the highest-ranked Liberal female minister ever; before her, Helen Coonan was the most senior, being deputy leader in the Senate during the Howard government. And the Coalition has never produced a female premier.

What about at this election? The Liberals, the LNP and the Country Liberals together offered 33 female candidates to voters in 140 electorates, or 24%. The Nationals offered one out of 20. By way of comparison, Rise Up Australia offered 34 women in 77 seats and Family First offered 28 women in 93 electorates. In the Senate, 12 out of 31 Liberal, LNP and Country Liberals places were filled by women. The Nats had one out of seven.

“So even when the Liberals do preselect women for around a third of seats, the country cousins still drag them down anyway.”

So even when the Liberals do preselect women for around a third of seats, the country cousins still drag them down anyway.

You can see where this leads: without women in Parliament, there are no women knocking on Tony Abbott’s door, whatever he might claim. That’s before you get to someone like Kelly O’Dwyer, who Tony Abbott declared was “knocking hard” on the door of shadow cabinet in 2011, but who apparently knocked in vain. Poor O’Dwyer’s knuckles must be red-raw from such wasted effort. Ditto former parliamentary secretary Teresa Gambaro, who doorknocked herself right onto the backbench.

While Gambaro and O’Dwyer’s travails are unexpected (O’Dwyer was heavily tipped to get a gig), the rest isn’t: the current incarnation of the Coalition is middle-aged, white and male, more so than in previous years, and that hasn’t changed since 2010. Voters have thus received exactly what they were promised for that last three years.

There’s also continuity in that, apart from Julie Bishop, women have ended up with traditional “female” portfolios — Marise Payne got Human Services; Sussan Ley is in Education, Fiona Nash is in Health, the demoted Concetta Fierravanti-Wells is in Social Services. It’s a ministerial line-up that wouldn’t have looked too unusual in the Fraser or Hawke years.

How the ministry actually functions, however, remains to be seen: we won’t know the administrative arrangements orders until tomorrow. Then we’ll have a clearer idea of what the public service will look like — what sort of department Nigel Scullion will have for Indigenous Affairs, for example, and will it sit within Prime Minister and Cabinet; what the split will be between Ian Macfarlane’s mega-department of Industry (including Resources), Bruce Billson’s Small Business and Andrew Robb’s Trade and Investment portfolios, and so on.

What has happened to the Minister for the Status of Women? Vanstone was there 2001-2003 and Bishop herself was there 2006-2007. In fact, since 1983 (30 years), there have been 8 ALP and 6 LNP women to advise the PM. Now it has been wiped off the map because the ‘boy’s club’ works better for women? Did Abbott tell the electorate about this (and the dumping of Science) before they voted for him? There is a bigger narrative here and just looking at the nitty-gritties won’t eliminate it.

Maybe they were too intent on reading his thought bubbles to notice his actions?

Get real, you can’t make the tea & scones : and sit in parliament?
This is the Nats – other than afternoon delights, and maybe a couple of other things – to them women only seem to be good for their votes?
A bit like those milk producing dairy farmers when you sit down to consider it? Remember what they did to them, udder Howard and his “ultimate solution rationalisation”? Kick ’em up the ribs, who else are they going to vote for?

After her stunt using “poor forgotten Kevin” on Valentine’s Day, it must be O’Dwyer’s turn for a red rose – of consolation?

“Women! Positions Vacant : Various – Abbott’s Promises R’ Us, Front Bench. Must have sex appeal and be more than a just pretty face – those without need not apply! Apply c/- Ms O’Jennist.”?