New addition to 7.30. Leigh Sales, one of the country’s top political interviewers, announced today that she is pregnant. Props to her for continuing to nail interviews while suffering morning sickness … 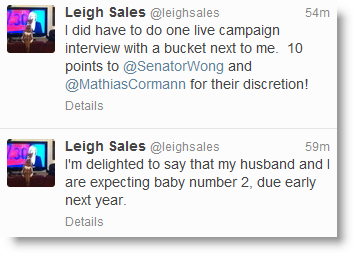 Sales will be missed when she takes maternity leave; who will replace her during that time? Last time she gave birth, Chris Uhlmann stood in as anchor. But he’s left 7.30. Will it be Tony Jones, Virginia Trioli, Sabra Lane — or will Uhlmann step back in? Just so long as it’s not the rather overexposed ABC everywoman Annabel Crabb …

Labor boosts Lib Dems. A switched-on reader based in Hong Kong worked out Labor stuffed up its how-to-vote cards for overseas voters, and snapped us a pic to prove it. For the NSW Senate race, Liberal Democrat David Leyonhjelm is on his way to Canberra with almost 9% of the vote — and as he himself says, positioned as he was on the hard left of the ballot, it’s partly due to the donkey vote. But did Labor boost the gun-loving Leyonhjelm’s chances?

“The ALP how-to-vote brochure issued in Hong Kong instructed NSW registered voters to write ‘1’ in the space at the top of column A, Leyonhjelm’s Liberal Democrat Party, instead of in the space at the top of column M. I questioned an official at the Australian consulate who acknowledged that ‘there had been a lot of confusion and complaints’. The Labor party volunteers told me they were aware of the problem, one told me that the copy for the brochure had been sent to Hong Kong from Australia electronically and the brochures were printed locally. Clearly, the final draft was not proof-read properly, or perhaps the copy itself contained the error.” 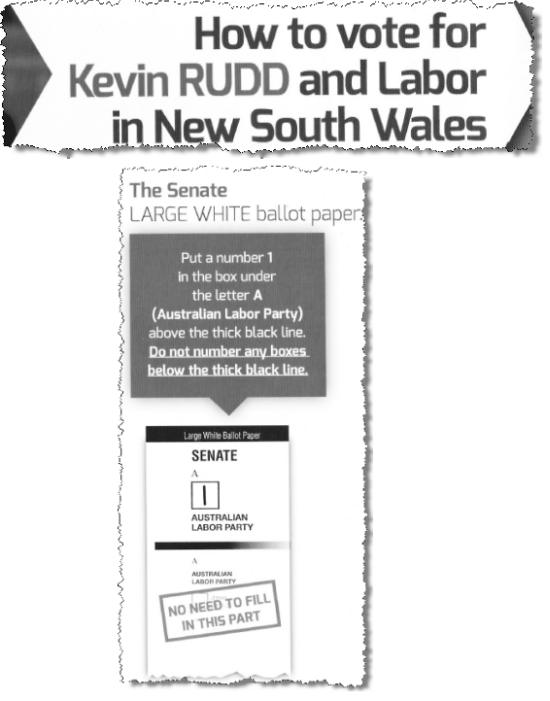 As our very savvy overseas mole noted, the local media reported that about 7700 Australians cast their ballots in Hong Kong, so quite a few accidental votes may have been cast for Leyonhjelm.

Big brother. We heard a rumour that a fuss is brewing over at APN, which runs radio networks and regional newspapers. There are claims of surveillance equipment being used in work vehicles “as a management tool”. We’ve put that claim to the company and are yet to hear back. If you know more, email Tips.

Macdonald boned. LNP Senator from the Townsville region Ian Macdonald has been jettisoned from Tony Abbott’s ministry — and true to form as an outspoken, forthright presence in the upper house, he’s criticised his sacking via Facebook. 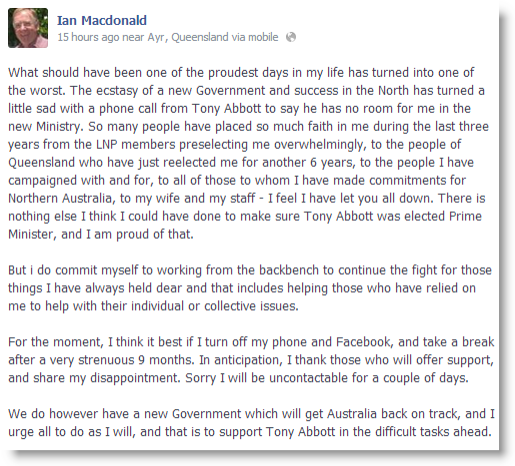 Macdonald has largely flown under the radar, but keen Senate-watchers would know he has his doubts about climate change and is a vociferous opponent of the Greens.

What’s Steve Cannane doing while Sales is off?
Stuck in The Dum going to waste?

Could the present Labor maladministration run a brothel in a mining camp?
“So why change them? Keep the present set of clowns on lest someone else get a chance to show them and their fuctional connections up.”

And yet the scales have fallen not from Macca’s one eye?s