Russia has returned from being a struggling second-rate international power to again strutting the international stage as, more or less, the equal of the United States. 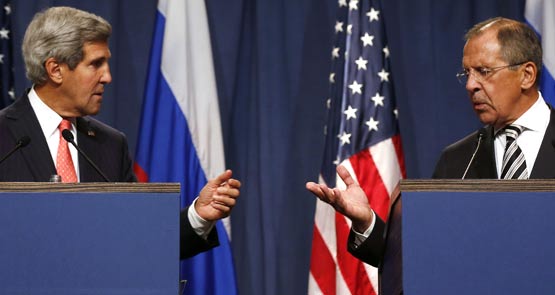 The “framework agreement” reached over the weekend between United States Secretary of State John Kerry and Russian Foreign Minister Sergei Lavrov (pictured) to identify and destroy chemical weapons in Syria is a positive step in a war to date characterised only by negatives. But it has created a series of new complications for the US.

Assuming that Syria’s Assad regime is not rapidly shifting its stockpile of chemical weapons to secure sites beyond its borders, Syria’s chemical weapons will be identified by the end of the week and, over coming months, retrieved — in the middle of a vicious civil war — and destroyed. Syria will also sign the convention against the use of chemical weapons, for what little that might be worth.

It is also standard — if not formally acknowledged — practice for the side giving up weapons to underestimate the weapons it has in order to keep some in reserve.

With Russia’s veto power that is, of course, a dead-end. Following its recent indecision, a US response is possible, but far from definite.

The rebel Free Syrian Army is, unsurprisingly, furious about the agreement. As it correctly notes, in terms of the proportion of deaths, chemical weapons are not the issue. Conventional weapons have taken what is now estimated to be over 100,000 lives; chemical weapons perhaps a thousand or so.

The FSA wanted direct intervention in the hope of taking away the Assad regime’s advantage. But the US’ primary concern is being seen “to be doing something” while not becoming embroiled in another war it is very unlikely to come out of well.

In this respect, Obama faces the classic US post-war dilemma. Having engaged in unwinnable wars — Vietnam, Somalia, Afghanistan, Iraq II — the US retreated to lick it wounds. The succeeding Democratic presidents — Jimmy Carter, Bill Clinton and now Obama – were more or less locked into an anti-intervention position, making them look weak on international issues. This, then, explains the tortured and sometimes confused rhetoric of both Obama and Kerry on the Syria issue, where they talk tough and then back off in alternating sentences. To reprise the Stephen Stills song, when “the eagle flies with the dove”, it usually comes off badly for the dove.

What is not yet much acknowledged is that Russia has returned from being a struggling second-rate international power to again strutting the international stage as, more or less, the equal of the US. Kerry is no diplomatic slouch, but Lavros — backed by the decisiveness of the bare-chested President Vladimir Putin, has put Russia at the centre of global negotiations.

In strategic terms, Russia remains very far behind the US, and it will not in the foreseeable future again challenge it — that is now China’s job. But in diplomatic terms, with all the unburdening implied by the style, the US was played like a Russian violin.

As for the people of Syria, there has been very little change on the ground. The war continues, the Assad regime appears willing to fight to the last, and the anti-Assad forces remain profoundly divided between “moderates” recognised by the West and the al-Qaeda-aligned Syrian Islamic Front.

A final outcome remains very far away. But, should it materialise, it will probably be something like a US-Russia-backed alliance of the FSA and pro-Assad forces, if without Bashar as-Assad, opposing the SIF. This is the logic of “my enemy’s enemy is my friend”.

Many observers now agree that the US intervention in Iraq should have removed Saddam Hussein but retained his Ba’athist regime in coalition with more moderate anti-Hussein elements. This would have produced the quickest and most stable outcome for Iraq, and avoided its subsequent civil war.

The last thing the US or Russia wants is for Syria to descend into a similarly interminable civil war. But, despite the Kerry-Lavrov agreement, it might be too late to avoid such an outcome.

What a poor article, it lacks depth and credibility from start to finish.. I don’t have enough time or space to argue all the ridiculous statements in this article.

So, what’s the argument here? Its an issue for other member states of the UN to get recognition for containing American stupidity and illegality and thus been seen as equals? Multilateralism, the UN and international law have all been broken by the US deliberately, continuously and through deception in order to achieve some neo conservative wet dream of a middle east that the US controls and dominates in totality(along with the oil).

“Many observers now agree that the US intervention in Iraq should have removed Saddam Hussein but retained his Ba’athist regime in coalition with more moderate anti-Hussein elements.” What? I think many observers agree that going to Iraq based on fabricated intelligence was wrong, not to mention illegal (According to the Nuremberg trials George W Bush should be in jail or hanging from the gallows) and the best thing to do was not to invade and plunge the country into chaos, and then leave it a massive mess..

May I predict the next step in the Dance of Death? (BTW, foreign funded, armed & sourced insurgents do not a civil war make, Damien, no matter how often you say it.) The rebel leader (or one of them..)is now complaining that his lot (the ‘goodies’) is losing to the al-Q franchise and demanding intervention (aka US bodies..err.. boots on the ground).
This will be the new excuse for the Hegemon “we must intervene to save Syria from al-Q nutters or at least ask, pretty please, that Saudi/Qatar fund them a leedle bit less”.

Can the Russians actually deliver ? They don’t have a great track record ( Georgia, Chechnya ) without tanks, and have an unusual current relationship with Syria’s only buddy Iran ( economic benefit from US embargo ). Look where the old ‘enemy of my enemy’ alliances have got us in this region ( not to mention 1914 ! ).