Measured by income, most Australians have never had it so good. But some groups are falling dramatically behind. Peter Whiteford warns of the dangers of residualising the poor at Inside Story. 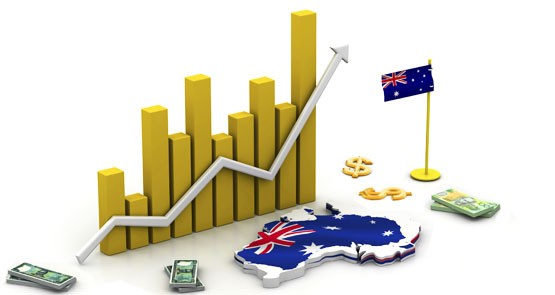 Over the past 40 years the economic fortunes of Australian households have fallen into two fairly distinct periods. In the “disappointing decades” of the 1970s and 1980s, to use economist Bob Gregory’s label, real wages stagnated, unemployment increased fourfold and male full-time employment as a proportion of the population fell by 25%. Since 1991, by contrast, Australia has been one of the fastest growing advanced economies in the world, enjoying 21 years of unbroken economic growth and largely escaping the global financial crisis, or the Great Recession as it is still known in Europe and the United States.

Chart one shows an index of real median household income based on ABS income surveys since 1981-82. For middle-income Australian households, income growth over the first decade was very low, with small gains in the late 1980s lost in the recession of the early 1990s. But it is fair to point out that many other countries had similar or worse experiences; real median incomes in New Zealand, for example, fell 15% in the 1980s.

As Australia’s economy started to recover from recession in 1995, median incomes began to grow, accelerating once the mining boom got under way in 2003. Median household income fell marginally in the period after the onset of the global financial crisis in 2008, but the latest ABS survey shows that in the most recent period, middle-income Australians experienced income growth comparable to that the rise before the start of the mining boom.

The benefits of this growth in income appear — at least on the surface — to have been widely shared. Chart 2 shows the pattern of growth for households at different points on the overall income distribution, ranging from households at the tenth percentile (where only 10% of the total population have lower incomes) and for different decile points up to the 19th percentile (where only 10% of the population have higher incomes). Although the poorest households haven’t done as well as higher-income households, their real disposable incomes are now more than 40% higher than they were in 1995. Middle-income households are more than 50% better-off over the period, about three times the increase enjoyed by comparable households in New Zealand. 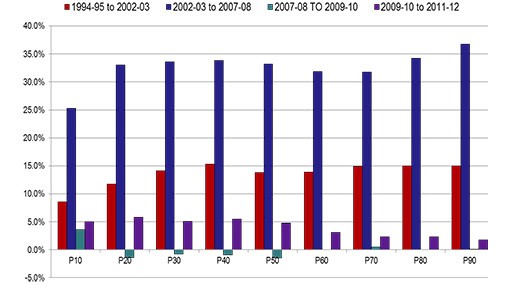 The growth in incomes for middle-income households in the period leading up to the GFC was the second highest in the OECD, exceeded only by Ireland. But the richest 10% of Australian households had the highest real increase in incomes of any advanced economy, with the result that inequality grew quite rapidly until 2008. Since then, inequality has reduced a little for two reasons — the age-pension increase in 2009 boosted the incomes of the poor, and the income of lower-income working families grew more quickly between 2009 and 2011 than did incomes among higher-income households.

For most households in Australia, incomes are now higher than they have ever been. Wealth holdings, not surprisingly, reflect similar trends. The most recent Credit Suisse Global Wealth report — prepared by Anthony Shorrocks, one of most highly respected world experts on wealth distribution — estimated that average wealth in Australia in 2011, at US$397,000, was the second-highest in the world after Switzerland and that Australia’s median wealth of US$222,000 was the highest in the world. This mainly reflects high rates of home ownership. Relative to the rest of the world, very few Australians have a net worth of less than US$1000; this reflects such factors as relatively low credit-card and student-loan debt. The proportion of those with wealth above US$100,000 is the highest of any country — eight times the world average. With 1,861,000 people in the global top 1%, Australia accounts for 4.1% of members of that wealthy group, despite having just 0.4% of the world’s adult population.

The most recent ABS Survey of Wealth and Wealth Distribution shows that average and median net worth dropped slightly between 2009 and 2011, but the changes were not statistically significant. Real median wealth is about 8% higher in real terms than it was in 2005-06. In the US, by contrast, real median wealth is about 35% lower than in 2005, and median household net worth (including homes) is a bit less than US$67,000, compared to A$434,000 here.

Although it may be unwise for any politician to say it, it remains the case that most Australians “have never had it so good”.

*Read the full article at Inside Story

What does the term “Asset Price Inflation” tell you about using home ownership to measure wealth?
Or the “Great Recession” for that matter.
Tell us that Sydney will not end up like Dublin.
Though not many Asian multi millionaires are out-bidding themselves to buy Dublin real-estate, unlike Sydney where a bungalow in a sought after suburb recently exceeded its reserve price by one million dollars.
Perhaps there will be many willing local liquidators of these inflated assets.
Now that would make them feel wealthy!
Sell, sell, sell.