The US Federal Open Market Committee is expected to implement a token reduction in quantitative easing of maybe $5 billion-10 billion to $75 billion-$80 billion of asset purchases a month instead of the current $85 billion. 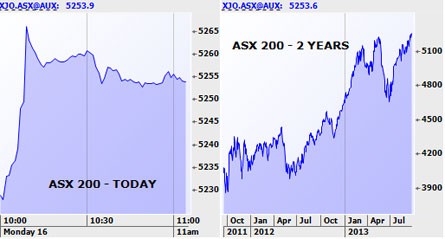 The market is up 33 points. Dow Jones was up 75. It was up 79 at best. The Dow was up 454 last week or 3.04%, the biggest weekly gain since January. S&P 500 was up 5 to 1688. The US$ fell and the A$ jumped on the news that Lawrence Summers was withdrawing his name from consideration as the next Federal Reserve chairman. He was seen as being against quantitative easing more so that Janet Yellen, who remains in the frame. It makes money printing more likely in future and in so doing weakens the US$.

The A$ also jumped to 93.38c on a Chinese official confirmation that better than expected economic performance confirms a 7.5% GDP forecast for this year. Retail sales came in below expectations at +0.2%. Consumer sentiment came in at a five-month low.  July business inventories came in above expectations. Syria’s diplomatic solution is crystallising — it is happening in stages with an inventory of chemical weapons needed from Syria this week or the threat of military action remains. Either way it looks like the stock market significance of the issue is fading. Oil price down 1.6% on the week. Gold down another $22 to a five-week low as the prospect of military action in Syria fades. We sold our gold trade on Friday as the chart tipped over. The gold price was down 5.62% on the week.

Federal Open Market Committee meeting this week — it is a two-day meeting — the statement will be out Thursday morning 4am our time. It is expected to implement a token reduction in quantitative easing of maybe $5 billion-10 billion to $75 billion-$80 billion of asset purchases a month instead of the current $85 billion.