The Brisbane Times has recruited ordinary punters to review the Brisbane Festival. Professional reviewers aren't happy. That and other media tidbits.

Fairfax pushes the boat out on arts reviewing. Fairfax’s Brisbane Times website has taken an innovative approach to covering the Brisbane Festival by recruiting a lawyer, advertising sales manager and a wharf yard worker to review the festival’s shows. The idea behind the “street reviewer team” is clear: to allow regular Brisbanites to have a say as well as the artistic cognoscenti. It’s also cheaper, no doubt, than commissioning professionals to do the job. The decision to outsource reviewing to the great unwashed has unsurprisingly caused some consternation among professional critics — especially because productions are using the reviews to spruik their shows. Wynnum wharf yard worker James Niland, for example, was a big fan of La Boite’s production of The Wizard of Oz. But is it misleading for La Boite to present his verdict as The Brisbane Times‘ in its marketing spiel?

Hamish leaves Ten. More bad news for incoming Channel Ten news boss Peter Meakin, whose lawyers are duelling with Channel Seven about whether the grizzled veteran has to sit on the sidelines for six or 12 months. Ten’s globe-trotting heartthrob Hamish MacDonald, billed as Australia’s answer to CNN star Anderson Cooper, is leaving the network. MacDonald, who famously wore red pants while presenting the late news, announced the move on Twitter today:

Chris Mitchell rent-a-quote. Has a newspaper editor anywhere in the world ever been quoted as often in their own paper as The Australian‘s Chris Mitchell? In a lengthy Weekend Australian feature on the sacking of NT minister Alison Anderson (the partner of Oz scribe Nicolas Rothwell) reporter Amos Aikman devotes four paragraphs to Mitchell’s musings on the territory. 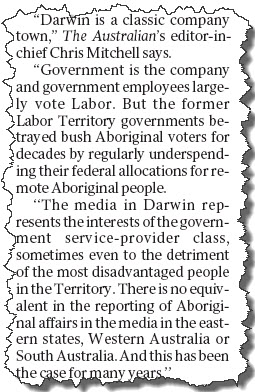 One can only imagine what Mitchell’s colleagues at the NT News made of being called part of the “government service provider class”.

Department of over-literalism. Page 9 of today’s Age offers up this yarn — “Tourism campaign will focus on food and wine” — quoting Tourism Australia chief Andrew McEvoy. “To me the world came to Australia and created its own flavours and we’re a fusion country, literally a melting pot,” McEvoy enthuses. Literally indeed.

Video of the day. It’s back: the Ten Network has announced it’s reviving its Eyewitness News brand from tonight. Sadly, news presenters (unlike the late Rex Mossop) no longer smoke pipes. This is a promo from Eyewitness News from the mid-1980s. We especially love the jingle …

“It’s going to be another hectic, crazy kind of day, with so much going on while you’ve been away. What are you going to do? We’ve got news for you. If you want all the facts, just sit back and relax …” 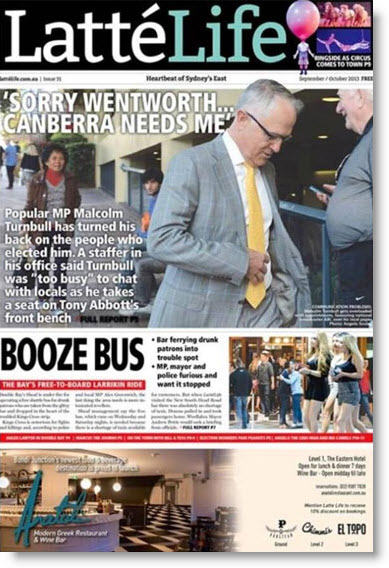 I wonder how NT Labor underspent in remote Aboriginal areas ‘for decades’ given they only spent one decade in power! There was decades of underspending, but not by Labor – because they were never in power.
What sloppy journalism!