Journo movements. Climate change gun Marcus Priest, who’s at The Australian Financial Review, has quit. Priest, a lawyer, is heading to a private law firm in Canberra. He’s one of the few Australian reporters who fully understand climate change policy … come back, Marcus, your readers need you. The Fin gig used to be held by the equally impressive John Breusch.

Meanwhile, Bianca Hall is the new political correspondent for the Fairfax Sunday papers:

The gig used to be held by Jess Wright, who ran into trouble for a story on Cory Bernardi (Fairfax had to retract and apologise). Chris Johnston did the job for a while in between Wright and Hall. Wright is now “breaking news reporter” at The Age.

Making an entrance. ALP Senator Kate Lundy found old habits die hard when entering the party room meeting in Parliament House today … you might not be back in there for a while, Lundy. But was it really an accident, or was the good Senator trying to infiltrate the session?

Spotlight on new senators. This election has certainly thrown up some interesting new senators, some of whom will occupy the balance of power from next July. For example, PUP’s Jacqui Lambie may pick up that last Senate seat in Tasmania (though the Libs are giving her a run for the seat). In a case before the courts in 2006, the Hobart Administrative Appeals Tribunal considered whether Lambie should get compensation for “permanent impairment” and for being “totally incapacitated for work” in relation to a back injury associated with her time with Defence. The tribunal ruled that yes, she was eligible for compensation on most fronts. The decision came after a lengthy legal to-and-fro between Lambie and the Department of Veterans’ Affairs.

After Crikey wrote this story on Lambie, noting she had been associated with the ALP and then the Liberals before the PUP, she got in touch with us to clarify the situation. Lambie worked at then-ALP senator Nick Sherry’s office as a rehabilitation placement, but was not paid by him. She said she left when her placement’s time was up. When asked if she had joined the ALP, she said: “I don’t believe so.” Lambie confirmed she then joined the Liberals, but said “I got up and left” in August 2012. “I’ve had my own issues down here with some of them,” she said of the Liberals, although she said she admired Sally Chandler, whom she is up against for the sixth Senate spot.

If you know of any interesting details on other senators-elect, send Tips an email.

Gratts in biscuit faux pas. Tips enjoyed RN perennial Michelle Grattan’s comment this morning that Kevin Rudd had invited Tony Abbott into the Lodge for an “iced volvo”. The Canberra version of the Popemobile, perhaps?

Hands off Ten. A commercial TV insider told us this:

“Everyone knows nothing even faintly negative about Ten is to be published in News Corp papers especially in the past six months or so  given the closeness between News, Ten chairman Lachlan Murdoch and CEO Hamish McLennan. So it’s been just one big relentless leg-up of Ten in their pages, highlighted by The Daily Telegraph a few weeks back bequeathing Wonderland with ‘TV hit’ status BEFORE it actually went to air. Sadly for Ten, it’s anything but.

But I’ll be buttered on both sides. Today there’s a double whammy. A slap at Wonderland appears in today’s Courier-Mail Confidential pages. In The Oz a bland story on programming boss Bev McGarvey rejigging her team includes a sentence saying ‘Ten has continued to struggle for ratings this year …’. There’s no byline on that story. Siberia awaits the journo and sub editor who allowed those truths to briefly infect News’ coverage of TEN.”

Then again there is a piece on page 11 of The Daily Telegraph spruiking Jessica Rowe’s return to the network. In these times of change, it’s good to know some things stay the same.

ALP graduates, class of 2013. There are plenty of ex-Labor MPs liberated by the 2013 election (many of them jumped before polling day). So what are they up to? Former prime minister Julia Gillard has returned to her home town of Adelaide, where she is to become honorary professor of politics at the University of Adelaide. The Oz tells us long-time Labor MP Martin Ferguson has attracted a host of offers for lobby positions. Having allegedly turned down a role as head of the Minerals Council of Australia, it seems he’s looking for a role in the industry sector. Former trade minister Craig Emerson is advertising “Craig Emerson Economics,” an economic advisory business catering to “Australian and Asian businesses and governments”. When contacted by Crikey, Emerson was reluctant to speak in depth about it, but he said it was coming along well.

What about former environment minister and rock star Peter Garrett? In his valedictory speech he pledged to take up the pro-environmental cause once again, against what he phrased as the Queensland state government’s “taint of recklessness and disregard” for the natural environment. Will he dress as a koala and rattle the tin at the traffic lights?

This leaves us wondering what Stephen Smith, Greg Combet, Simon Crean and Nicola Roxon are up to next (Smith’s cricket career is going well, of course). If you’re in the know, send us an anonymous email.

John Howard, internet pioneer. Thanks to @CanberraInsider for tweeting this screenshot of what was apparently the “first Australian prime ministerial website”, circa 1998. 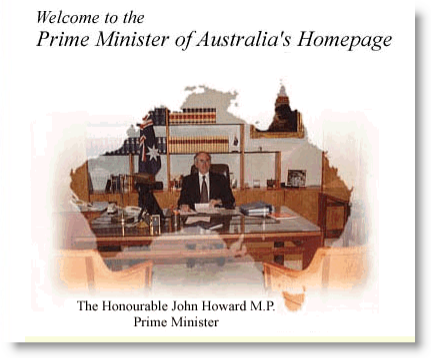 And what did we find on the “press release” page? Why, it’s an “announcement of the successful proponent to build the very high-speed train between Sydney and Canberra” (August 1998 — don’t hold your breath for this project).

Tips also thoroughly enjoyed John Howard Kids’ Quiz, though sadly we only scored four out of eight. See if you fare better.

‘If I die, it will be on her shoulders’: Afghan contractor’s message for Marise Payne

OMG – a personalised certificate of Completion from Johnny Himselfs. That’s one for the fridge

Eight out of eight first go! Admittedly, it helps to have the agenda at the back of your mind (obviously, ‘maximum’ answer for the ‘how many women in cabinet’ question, even if it was only, like, 4 out of 28). Printing out my certificate as we speak.