It didn’t take long. Barnaby Joyce didn’t take long to get those inter-Coalition tensions building. His scaremongering about Indonesians owning land that cattle feed on is underway. It will take skill and firmness from Tony Abbott to stop this National Party populism getting out of hand.

Forget the width, feel the depth. Just when the maps of the Arctic ice cover for this last northern summer would have you believing there was at least a brief respite, along comes the ESA’s CryoSat missionto provide three consecutive years of Arctic sea-ice thickness measurements which show the ice continues to thin — whatever is happening to its width.

Speaking this week, professor Andrew Shepherd from the University of Leeds said “CryoSat continues to provide clear evidence of diminishing Arctic sea ice … The volume of the sea ice at the end of last winter was less than 15,000 cubic km, which is lower than any other year going into summer and indicates less winter growth than usual.” While it seems unlikely that a record minimum of sea-ice extent will be set this September, the thinner ice at the start of summer could mean the actual volume of ice may reach a new low.

The great Aussie gambling game. It’s not just poker machines — Australia rates highly in the world’s biggest gambling game as well. The Bank for International Settlements this month published its three-yearly review of foreign exchange markets and our Aussie dollar features as a major provider of chips in turnover which averaged $5.3 trillion per day in April 2013. This is up from $4.0 trillion in April 2010 and $3.3 trillion in April 2007. The growth of interest in the AUD over the last 15 years has been quite spectacular. Its turnover now makes it the world’s fifth most-traded currency.

More bullying caused by bullying prevention. It’s a complex business, this social engineering. Just published research in the Journal of Criminology finds that students attending schools with anti-bullying initiatives may be more likely to be a victim of bullying than children at schools without such programs. From the article A Multilevel Examination of Peer Victimization and Bullying Preventions in Schools by Seokjin Jeong and Byung Hyun Lee of the University of Texas:

“Contrary to our hypothesis, students attending schools with bullying prevention programs were more likely to have experienced peer victimization, compared to those attending schools without bullying prevention programs. It is possible that bullies have learned a variety of antibullying techniques but chose not to practice what they have learned from the program.” 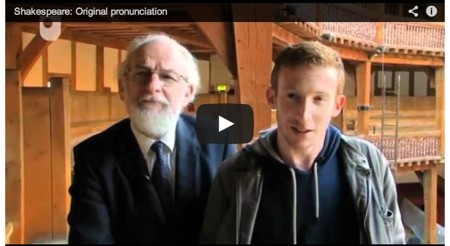 Hear Shakespeare as it was meant to be heard — “The stereotypical English accent of today is not the English accent of Shakespeare’s time, which goes at least some way towards explaining why, when you read Romeo and Juliet in High school, half the play didn’t make sense … as David Crystal, a linguist from the University of Wales, explains in the video above, some of the puns, and many of the rhymes, just don’t work anymore.”

The child exchange: Inside America’s underground market for adopted children — “Through Yahoo and Facebook groups, parents and others advertise the unwanted children and then pass them to strangers with little or no government scrutiny, sometimes illegally, a Reuters investigation has found … The practice is called ‘private re-homing,’ a term typically used by owners seeking new homes for their pets.”

The Shakespeare one was possibly the most interesting thing I’ve read all week. Apart from Voyager 1 leaving the heliosphere, perhaps.

This “Little Indonesia” Cousin Jethro is getting into a lather about (after selling out dairy farmers to Howard – then massaging their udders with that “unfair supermarket duopoly” flannel for votes) – where does that leave animal welfare re the cattle they ship out?

“The stereotypical English accent of today is not the English accent of Shakespeare’s time, which goes at least some way towards explaining why, when you read Romeo and Juliet in High school, half the play didn’t make sense … .”

This is just irritating. when you read shakespeare at school, there is just text. no accents are involved. the reason shakespeare is difficult for children has little to do with changes in accent of the spoken word, and almost everything to do with how lost children are in their local patois. when you are sixteen, shakespeare needs to be ‘translated’ in the same way that beethoven or mozart needs to be translated for a mind brought up on pop or hip hop. something gets lost in translation of course, but not half of it, more like four or five percent.
when you are older and the works are familiar they become part of the furniture and there is no difficulty in understanding or appreciation.
also this item is decades old in as much as we have known for a long time that accents and speech rhythms have changed and that the modern trained shakespearean voice is a construct much like the trained voice of opera singers.
what was the point of this item?