Freelance writer Mel Campbell is in Greenstown with Adam Bandt, where everyone is donning ponchos, stockpiling lattes and readying themselves for the culture wars to come. 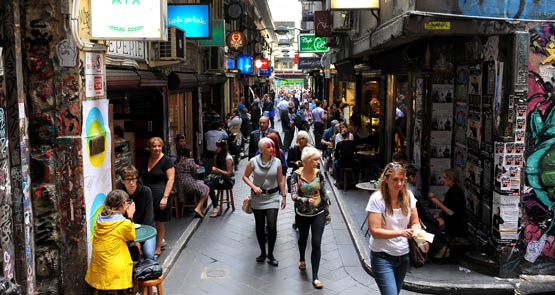 It’s Sunday. The day after. The Mad Monk has won. Across Australia, political warriors struggle from bed with crippling hangovers. On the TV news, a peach-faced Labor lad sobs openly. Twitter and Facebook are ablaze with recrimination and despair.

But the warm spring sun is smiling on the seat of Melbourne. It filters through the leafy boulevards of Princes Hill and Flemington, and it pierces the CBD’s Hoddle Grid. It gleams on the genteel old mansions of East Melbourne and Parkville as on the tight, terraced cottages that once housed the workers of Abbotsford, Carlton, Richmond and Collingwood. It shines over the old housing commission flats, home to immigrants and the poor, and the new, equally ugly apartment towers for aspirationals and empty-nesters.

Make no mistake: the sinister, silken tentacles of blue ties are reaching across Australia, choking the nation as they choke the compassion from the men who wear them. But expedient bigotry and budget-slashing hold no sway here. The people of Greenstown are the only ones who will defy the Mad Monk’s brutal agenda.

So says Bandt. Our man in Canberra. Our mild champion. Tieless, arms folded heroically, he smiles encouragingly from billboards and from the corflutes zip-tied to share-house fences.

They called him a one-term wonder, a preference-pilferer, a publicity stuntman. But he’s back now, his 7% swing empowering him with a merciless mandate for social justice. I believe in Adam Bandt.

We’ll need him. It’s baddies versus baddies in Canberra now. In the Mad Monk’s cabinet lurks The Bishop, a terrifying cyborg with laser eyes that burn through Australia’s social fabric. Ice Hockey, the hulking goalkeeper whose razor stick and skates slash at budgets left and right, barring Australians from their national treasure.

Choking off our piratical internets is Turntail Turnbull, who’s constantly given chances to do right by Australia, but he turns his silvertail every time. Ruling rural Australia is The Truss, who ties up transport infrastructure by insisting more roads are the way to go. And Stoptheboats Morrison doesn’t feel pity, or remorse, or fear, and absolutely will not stop, ever, until people smuggling is dead.

Watching from the shadows is the nest of Labor vampires known as the caucus. The blood of the New South Wales Right flows in their deathless veins as they gnaw viciously upon each other. Their leader, Kevin the Rudd, has several times been resurrected. Now, his powers ebb low, but make no mistake, he still lurks in the Parliament, watching. Waiting.

“Defiant voices murmur around the food vans, through mouthfuls of artisanal vegan gumbo and pulled pork …”

Greenstown is the last bastion of civilisation: a pocket of hope in a desperate country. The Mad Monk knows this — his henchmen in the Victorian state parliament are already planning to wreak vengeful havoc upon Greenstown. They’re bulldozing a tollway through the gentle cottages of Clifton Hill, ploughing violently under Royal Park, even through the Greenstown dead slumbering in Melbourne General Cemetery. And they’re hiding their reasons beneath a cloak of secrecy.

But Bandt won’t be fighting back alone. Our oasis of compassion forges footsoldiers.

Gangs of bearded hipsters patrol the bike path perimeters, latter-day Ned Kellys in T-shirts of shamrock green. They bail up hapless tourists who got lost trying to find the Lygon Street restaurants. “Whaddaya reckon about marriage equality?” They smack AeroPress cylinders against their palms with idle menace.

Middle-aged arts administrators defend the Flinders Line. The winds of change tousle their asymmetrically cropped, salt-and-pepper locks and set their chunky silver earrings and amber beads to clanking, but their feet are planted firm in sensible Camper boots. They’re shoulder-to-shoulder with the art gallerists whose Fitzroy and CBD safe houses are open to receive the inevitable casualties of the coming culture wars.

High in the Ivory Towers, the academics can see the cuts coming. After grading 75 student assignments without overtime pay, they turn furiously to their computers, op-eds burning from their fingertips. Once, knowledge was enough. But those innocent days are gone. These scholars are prepped and ready to Engage With The Public.

Bandt surveys his domain, jacket flapping heroically in the breeze. There’s something steely in the gaze behind his mild-mannered inner-city lawyer’s spectacles. He will defend Greenstown’s tired, its poor, its huddled masses yearning to breathe free. In a darkening nation, he is the solar-powered light on the hill.

But, but, Bob Brown left, and it was all supposed to go wrong, wasn’t it?

Congratulations Mel, I think that you’ve just got the Crikey record for the most tired cliches and stereotypes in a single article. It would be nice of you could rewrite something a bit more thoughtful and rigorous.

Why so serious, dear professor?

Mel, only because all the articles written about Bandt’s win use the same tone, surely someone with your undoubted ability can aim to be different? 🙂