Reforming the Senate: which model would work best?

The calls for reform in electing senators have grown louder after the weekend result. But what's the best model to fix it? Crikey's poll-cruncher examines the options. 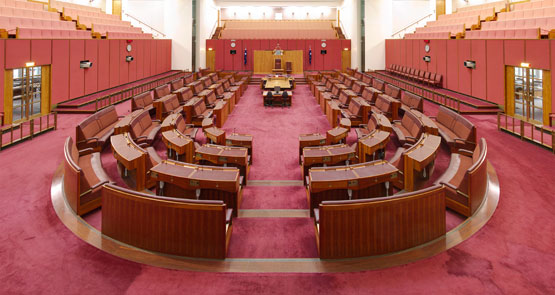 Ballot papers the size of tablecloths. Parties running with no further purpose in mind than funnelling preferences in directions unknown to most of those voting for them. A clamour for reform to prevent a repeat of the whole fiasco.

Welcome to 1999, and the aftermath of that year’s New South Wales state election.

That election entered political folklore on account of an upper house ballot paper that measured 100 by 70 centimetres, featuring 264 candidates representing 81 groups in pursuit of 21 seats. Among the parties involved were the Marine Environment Conservation Party, the Women’s Party, Save the Forests, the Marijuana Smokers Rights Party and the Gay and Lesbian Party, all of which did their bit to elect Malcolm Jones of the Outdoor Recreation Party off a base of just 7,264 votes out of 3,557,762, or 0.21% of the vote.

It took a while for the Senate to catch up, owing to the much higher quota where only six seats are up for election, but it did so in sufficiently fine style on Saturday to turn electoral reform into a topic of water cooler conversation.

The apparent success of the Liberal Democratic Party, Australian Motoring Enthusiast Party and Australian Sports Party has particularly focused minds on the above-the-line voting system, which was introduced in 1984 to relieve the average voter of having to laboriously copy out her favoured party’s how-to-vote card in order to register a formal vote.

The obvious model for reform is that pursued in NSW after 1999, which independent Senator Nick Xenophon appears set to pursue with the introduction of a private members’ bill. Together with raising the hurdles for registering parties and running grouped candidates, this involved abolishing group voting tickets by allowing voters to number multiple boxes above the line, with their vote exhausting at the point where no further preference were provided. Such a system would be consistent with the sound principle that voters should be free to do as much or as little with their votes as they see fit, and given the most straightforward means practicable of achieving that end.

As with the optional preferential voting regimes for the lower houses of NSW and Queensland, voters using this system have proved largely content to simply number a single box. Consequently, the final seats are typically won by the candidates whose starting point is nearest to a quota. Some complain that this amounts to a de facto “first past the post system”, but this doesn’t seem like much of an argument so far as elections for multiple seats are concerned. It would surely be preferable to require that parties be made to earn preferences from voters who ultimately prefer other parties, rather than being gifted them either begrudgingly or unknowingly.

To my mind at least, the consistency of such a reform with common sense can be illustrated by considering how Saturday’s result would have looked if no preferences had been allocated: 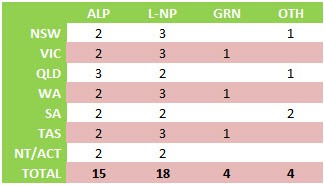 In other words, the seats that stand to be won by the Australian Motoring Enthusiasts Party and the Australian Sports Party would respectively have gone to Liberal and Labor, but non-major party candidates would still have won seats where their share of the vote warranted it, including two seats for the Nick Xenophon Group commensurate with its quarter share of the vote in South Australia.

There remains the complication that the Liberal Democrats are still in the mix, despite having scarcely more meaningful a mandate than their micro-party cousins. However, the projection assumes that vote totals are unrelated to the electoral system, which is assuredly not the case.

By removing the incentive for registering micro-party preference harvesters, an optional preferential system would reduce the number of competing parties and hence the size of the ballot paper. This would lower the error rate that worked so heavily to the advantage of the Liberal Democrats.

The first issue could surely be resolved in the modern age by some form of randomised ballot paper ordering, as is used in the “Robson rotation” systems in Tasmania and the Australian Capital Territory. My own ideal model would be for rotation to operate both above and below the line, so that those who take the trouble to pursue the below-the-line option would be the ones deciding which of a party’s candidates was elected.

The party naming issue is more of a grey area. No doubt the British parliament was on solid ground when it legislated in 1998 to prohibit candidates from running as nominees of the Conversative Party, the Literal Democrats and the Labor Party (observe those names carefully), as had been happening in the years previously. However, it’s harder to justify allowing a party to claim a monopoly on “liberalism” or the representation of labour interests.

This issue emerged after “Liberals for Forests” contested elections in 2001 and 2004, which the Howard government sought to deal with by prohibiting party names that suggested a connection to other registered parties. The difficulty might perhaps be addressed by allowing for explanatory notes on ballot papers to clarify the point where parties are similarly named.

Finally, I have one further and no doubt more contentious electoral reform to suggest. Earlier I argued that voters should be free to not allocate their vote as they see fit. The logical extension of this is that we should jettison our curious practice of corralling reluctant voters to the polling booth under the threat of a fine.

One particular advantage of voluntary voting, I suspect, would be that the snake oil peddled to television viewers over the last two weeks of the campaign by Clive Palmer wouldn’t have found quite so many buyers.

It’s time to review compulsory voting – we only need engaged voters, not Qld loonies. The campaign in Indi is a good example – Ditch the Witch indeed.

I’m not convinced that abandoning compulsory voting would filter out one-issue candidates (or “no apparent issue” in the case of PUP). However it would likely accelerate the trend towards megabuck USA-style campaigns.

I do think it should be compulsory for candidates to obtain some kind of political general knowledge certificate, perhaps administered by TAFE and a available to anybody who is willing to put in some effort.

People should of course have the right to hand in a blank ballot paper, AFTER spending their time in the ballot box.

They should certainly NOT have the ‘right’ to be bullied, obstructed, or outright forced out of their right to vote, by political opponents targeting their ethnicity, age-group, socioeconomic background, or other category.

If you take away the compulsory ballot, you may as well end the secret ballot as well. That’s the reality that plays out in ‘democracies’ all over the world.

I find that people who oppose the compulsory ballot come from one of two backgrounds.

Either they have a staggering degree of ignorance about the damage that can and inevitably will be done to a democracy, by the erosion, deliberate or otherwise, of people’s connection to the democratic process.

Or, they are after exactly that outcome.

Isn’t it ironic how Australians generally hold our politicians in contempt at election time, and even complain about having to vote, yet complain even louder between elections when the party/leader(s) won’t do what we like them to do?
It’s like the old adage: “If you want it done right (ie. how you want it), do it yourself!” (ie. stand for election yourself)