Sydney Lord Mayor Clover Moore has threatened to sue a local paper for defamation. That and other media tidbits.

According to Moore’s lawyers, the article is defamatory because it suggests Moore is: a) corrupt; b) unprofessional; and c) is worthy of investigation by the Independent Commission Against Corruption. City News owner Lawrence Gibbons was involved in a stoush with the council last year when he was ordered to muzzle his dog Oscar after it attacked a cat, a mini-fox terrier, a Sharpei and a man in Darlinghurst. Gibbons argued his dog suffered from arthritis and anxiety and did not deserve to be declared dangerous.

A spokesperson for Clover Moore told Crikey: “The claims being made against the City and the Lord Mayor are baseless, they have been investigated previously, and the Lord Mayor has asked the CEO to refer all material to ICAC so that can be confirmed.”

City News editor Peter Hackney, who wrote the story, said: “I believe I wrote a fair, balanced piece which presented both sides of the story … I do not personally believe the Lord Mayor is corrupt, and I respect and admire Ms Moore in many ways. However, I was writing a news report, not an op ed, and deemed my personal feelings irrelevant. It is unfortunate that the Lord Mayor, or at least her advisors, have taken a stand against impartiality in this instance. I will continue to report on matters relating to Ms Moore, Mr Harper, the City of Sydney and anything else in a fair, balanced and impartial manner, irrespective of threats.”  — Matthew Knott

A staff error? We think someone at The Guardian put the wrong photo with a story about Anthony Watts, a rugby league player who bit another player’s penis. We are guessing the story had nothing to do with the honourable member for Indi … 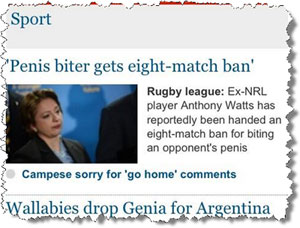 Full disclosure. ABC management, from managing director Mark Scott down, should order the producers of the organisation’s myriad news and current affairs programs to clearly identify lobbyists when they appear on programs such as AM, PM, Q&A, The Drum or other News 24 political chat programs (Capital Hill, for one). As Crikey pointed out yesterday, there’s a flood of Tory carpetbaggers making their way to Canberra to attach themselves to the public teat. But on The Drum last night on News 24, there was Peter Collins described as former New South Wales Liberal leader, which he was, years ago. More recently he’s been a lobbyist, but this was not mentioned.

Appearing on some of the ABC’s programs is gold to lobbyists, especially if they can appear without disclosing who they are. The ABC should also demand a list of lobbyists’ clients and purviews. The ABC is big on the need for transparency and an end of opaque arrangements in politics, business and other areas of Australian life. Surely the same applies to the taxpayer-owned broadcaster. — Glenn Dyer

Front page(s) of the day. Bill de Blasio has come first in the Democratic primary vote, making it very likely he will be the next mayor of New York City. But as the New York Daily News knows, the real winner is son Dante’s hair. The New York Post focuses on the losers: Carlos Danger (aka s-xting Anthony Weiner) and Client 9 (aka prostitute-visiting former New York governor Eliot Spitzer). We could not choose which pun we liked best … 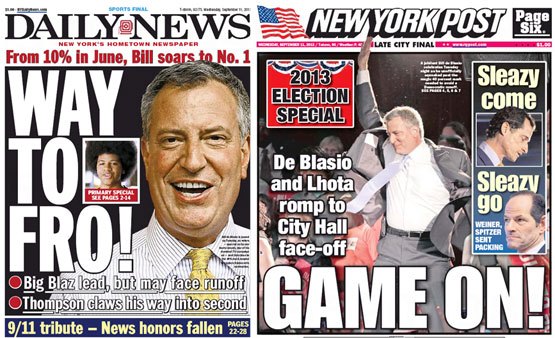 I am extremely annoyed with the ABC at the moment. You mention only one person appearing on The Drum, who is a lobbyist. For the Coalition side of politics, of course.
During the election campaign the ABC’s News and Current Affairs programs were soooo biased, I was prompted to sign the petition on Change.org, asking them to explain why commentators from the IPA filled 42% of the appearances on The Drum.
Not good enough, ABC!!

As for The Dum :-
Again, any body that grants an unprincipled, whatever-it-takes, wastrel (willing to gamble with the nation’s political and parliamentary reputation), moral vacuum and craven, blind political opportunist like Reith (after his phones, deliberate misleading over “Children Overboard” for political gain, and his treatment, as Leader of the House, of House Speaker Halverson because he was too impartial with Labor) the opportunity to reinvent himself as someone with any integrity and something to contribute to good governance, then complains about the degeneration of our politics, has got to be joking – but not at al funny.

Has any other individual done more to undermine the reputation and credibility of our politicians and our democratic system?
And here he is, given the opportunity on “The Dum”, holding forth on the right standards?
All for “entertainment value”?

We used similar “drums” before we got the sewer connected.