If Hanson-Young can sue <em>Zoo</em>, what about those <em>Daily Tele</em> shockers?

Sarah Hanson-Young has a good case against Zoo for a photoshopped bikini photo. And defamation lawyers tell Crikey the case could give other editors some pause for thought.

There are strong precedents for Greens Senator Sarah Hanson-Young’s bid to sue Zoo Weekly for photoshopping her head onto a lingerie model’s body, defamation experts say.

The high-profile case may also clarify how far media outlets can go in ridiculing politicians through digital manipulation. The Daily Telegraph has attracted attention recently for depicting former speaker Peter Slipper as a rat and Kevin Rudd and Anthony Albanese as Nazi characters from Hogan’s Heroes on its front page.

New South Wales Supreme Court Justice Lucy McCallum yesterday struck out several of Hanson-Young’s arguments — including that the photo made her look incompetent and immature — but allowed her to argue her case in front of a jury. “I do not have any difficulty accepting that the article is denigrating and capable of holding [Hanson-Young] up to public ridicule,” McCullum said yesterday.

Zoo has argued the article — in which the lads’ mag offered to house a boatload of asylum seekers if Hanson-Young posed for a “tasteful” bikini shoot — was clearly intended as a joke. 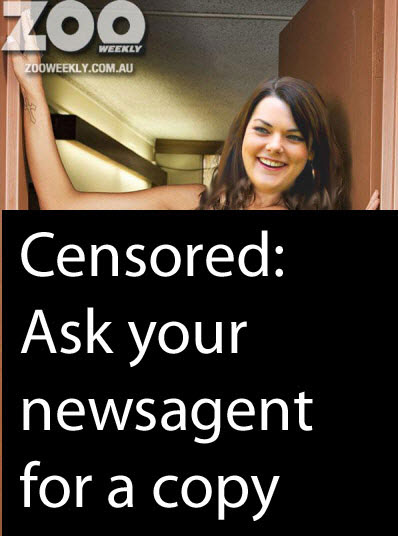 Peter Bartlett, a partner at MinterEllison, told Crikey: “I think it’s quite possible a jury will find it is defamation. She’s certainly in with a chance … I look at the photograph and would say it suggests she is not a serious politician.”

Bartlett notes public figures have successfully sued for defamation over photos that hold them up to ridicule. In 1993 a judge awarded rugby league player Andrew Ettinghausen $350,000 damages after HQ magazine published a photo showing his genitals (later reduced to $100,000). Ettinghausen argued the piece implied he had deliberately allowed the photo to be taken. Newsreader Anne Fulwood successfully sued Penthouse in the same year over a cartoon depicting her naked from the waist down.

But Justin Quill of Kelly Hazel Quill said: “I don’t think the average reader would have thought any less of her because it was clear it was it was just a photoshopped image. Does it hold her up to public ridicule? I don’t think so. There was no attempt to pretend it was her – I don’t think it’s enough to justify a defamation action.”

Media law expert Mark Pearson told Crikey: “There is a poor track record in Australia when it comes to satire and defamation. Satire is very hard to defend.” A notable exception is cartoons, which have traditionally been well-protected.

Pearson notes Hanson-Young has several hoops to jump through. First, she has to prove the article was defamatory — i.e. that a reasonable person would think less of her after reading it. If the jury found the article defamatory, Zoo could defend it on two grounds: fair comment/honest opinion and the implied constitutional right to freedom of political communication. The latter defence was not available in the Ettinghausen or Fulwood cases because they are not political figures.

“Since 1992 [when the political communication defence was introduced], there has been much freer criticism of politicians,” Pearson said. “It could take a case like this to determine where the line gets drawn … It comes down to whether the ordinary reader actually takes it seriously. The question is whether the reader sees it as a bit of fun or whether there is a reputational impact.”

If this is the worst she had printed about her she is fortunate. However, her action on this typifies to me her overall capability and flexibility as a politician. Mind you I haven’t been able to take her seriously on any issue she speaks about. Another waste of taxpayer funded resources.

If SHY can sue Zoo – she can sue more than half the country – Good luck with that you idiot!

Sarah Hanson-Young a “serious politician”? She theatrically wept in Parliament when she spoke of the “inhumane housing” of the 1000’s upon 1000’s of alleged asylum seekers flooding our shores. Yet she failed to acknowledge that when ADF personnel deploy to countries of those alleged asylum seekers to assist in a better future for them, that they live in lesser accommodations, and receive far less commodities whilst ably aged men of those countries would rather flee instead of helping the helpers. I was extremely insulted by her act, as were 1000’s of Australians. She has never been a serious politician, but as a highly paid actor, she is first class…. I hope this backfires and sets a precedent for other politicians who can’t handle a bit of public ridicule for being ridiculous. If you want to be in the spotlight, and be paid extremely handsomely for it – be prepared to cop it every now and then. Someone fetch her a whambulance…

Amazing how women in legislative ranks brings out the trogs & when she is Green as well, the real knuckledraggers join in.

Just some more, of your standard gutter “Follow the Bleater – Political Commentary” in this country – “If Murdoch can do it why shouldn’t everyone else?”?