A leadership ballot would leave Labor ‘helpless’ … so what?

Concerns about a party ballot for the Labor leadership pander to the media's inability to cope with the unusual in politics. This is exactly what Labor needs right now. 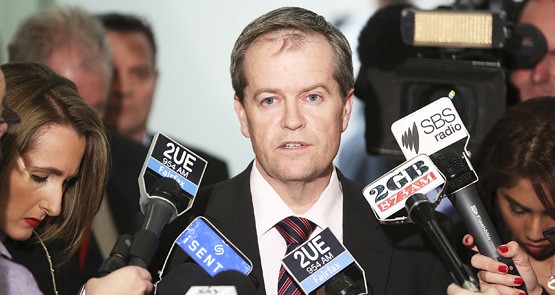 The leadership rules bequeathed to Labor are a “farce” that leave Labor “helpless” and “a laughing stock” while the Coalition “gets away with murder”, according to Stephen Conroy.

One would hesitate to call revoking Steve Brack’s trade post gig “murder”, and since the Coalition hasn’t done much else since being elected, it’s not fully clear to what Conroy is referring to. If it’s about Tony Abbott’s capacity to communicate more effectively than Labor, well he’s been getting away with murder since December 2009.

Conroy has plenty of brains and more political mongrel than most of his colleagues. But, unsurprisingly, he’s less than enamoured with any reforms to the Labor Party’s internal decision-making that might dilute his power — particularly selecting candidates via primaries, which he views as the path to the Americanisation of politics, and selecting the leader by a party ballot, an idea even more odious to Conroy because it came from the despised Kevin Rudd.

The Brits take a different view of leadership contests. After the 2010 election, once Gordon Brown couldn’t form government and stood aside, the Labour Party’s election process took a fortnight short of five months to produce Ed Milliband. There were five candidates who made the ballot paper and four televised debates.

Under Ed Milliband, UK Labour currently comfortably leads the Conservatives in all opinion polls, and in some outpolls the combined vote of the Tories and the Liberal-Democrats.

The 2010 race was, admittedly, a little longer than usual. When John Smith died suddenly in May 1994, it took just over two months for Tony Blair to emerge as the winner. The Tories don’t take quite as long: it took them six weeks to replace John Major after the election in 1997. In 2001, having been beaten by Blair, they settled on the two candidates to go forward to a vote of members — the Tories have a party ballot as well now — relatively quickly, but the party ballot took another two months. In 2005, it took two months for David Cameron to emerge, and that was a full eight months after Blair had defeated Michael Howard.

The Brits have a longer election cycle, of course — five years to our three — but it’s clear having a party ballot leadership process for a period of many weeks or even months is unrelated to electoral performance: the systems have produced winners like Blair and Cameron, and losers like Iain Duncan Smith.

So what happens to Labor here if it has a party ballot that takes a few weeks? Who will lead the party? Who will assign shadow ministries? Well, who cares? The voters have just elected a new government. They don’t care about the opposition and won’t for some time. The only people who care are political journalists, who prefer to function in a well-ordered environment in which it’s clear what everyone’s roles are — any departure from the norm and they start invoking the “chaos” narrative.

That’s undoubtedly the fear of opponents of a party ballot for the leadership, that the process will be portrayed by the media as “divisive” and “chaotic” because something unusual is happening.

There’s two problems with this: firstly, any leadership deal hammered out behind closed doors will be portrayed as “faceless men” and business as usual by the media anyway; secondly, Labor has for too long allowed itself to be convinced that it’s necessary to sacrifice party democracy, public policy debate and grassroots participation in the name of pandering to the media’s narrative of unity. The result has been an atrophying of communication skills and the party’s ability to sell policy in a contested environment, and the growing perception Labor stands for nothing. If voters never see you arguing passionately over policy, they’re much more likely to decide that you don’t really have much interest in policy at all.

So, indeed, a party ballot election would take time, and the media would portray it as “chaos”, but so what? Six months from now there’ll be a leader with the support of their whole party and the leadership ballot will be a matter for the history books. Voters nearly installed Abbott as prime minister in 2010 barely eight months after his party tore itself apart. What happens on the Labor side in the next three months, even if there’s a double dissolution election next year, will be of no moment to voters except that, even if they’re antipathetic to Labor, they will have seen candidates pitching their values, their beliefs and their policies to members.

After the circus of the last few years, Labor needs more of that, not less.

Stephen Conroy, whose “brains” gave us Steve “Sloppy” Fielding, lecturing on “what needs to be done”?
Nuff said?

Agree with this Bernard. If the Labor party had a genuine internal debate about policy and leadership they might be less disposed to abandon either on a whim.

Thats bullshit Bernard. Continual undermining of the leader by a well sourced gutless waste of space allowed to press gallery, and the rest of the fleas, to treat the prime minister, and everything she did or said, with absolute contempt. A perfect example; you and your friends missing the misogyny speech because you were following the slipper sideshow. Disloyalty on that scale had never been aired in the labour party till that time & you trash helped sell it non stop. piss poor to be pontificating now knowing the gutless wonder is still in the game and obviously ready to do it again; with your help.