Clive Palmer kept the media guessing on election night -- until he sniffed a win. Freelance journalist James Rose reflects on his night with Clive -- who now looms large on the political scene. 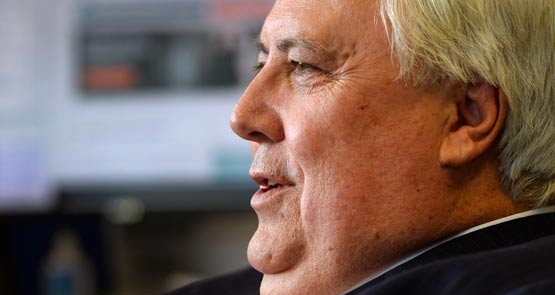 The entrance to Clive Palmer’s salubrious digs is marked by a huge picture of the Titanic. Clive’s Titanic. The billboard shows the bow of the ship, seen from below, like it’s going to crush you as you drive into the the ritzy resort. Approaching on this Saturday night, election night, I thought it was a clever symbol for a doomed campaign: the massive, expensive, unsinkable ship known as Clive Palmer meets the iceberg of the electorate. And sinks.

But it didn’t, did it? Lively Clive — “Clively Palmer”? — looks to have perhaps won his seat (Fairfax) and as much as one-fifth of the national vote — with a couple of senators possibly thrown in for good measure.

The resort is a stone’s throw from the buzzing holiday strip of Coolum. Actually in Yaroomba, not Coolum, despite being called the Palmer Coolum Resort, it’s backed by the sturdy shoulders of one of those dead volcanoes that dot the Sunshine Coast, has a PGA-standard gold course snaking through it and sports the same canary yellow livery of the Palmer United Party campaign. As a home spread it’s mighty impressive. As the backyard of an MP it’s possibly unheard of.

In the Yandina Room, steaming, bubbling catering trollies are arranged outside. This is the the media room, and it’s empty at 6pm. A massive TV carries the ABC’s election coverage. Tea and cakes are along the back wall. By around 7.30, there’s maybe 10 of us there — The Courier-Mail, Fairfax, ABC, network TV channels — but its a thin return for what appears to have been higher hopes for a media throng.

Brenton Gibbs, one of Palmer’s media boys, rouses the room with an announcement that the man himself will arrive in 10 minutes. The camera jockies complain about the blandness of the room and set up outside among the shrubs. A possum considers the bright lights and action through gleaming eyes, before dissolving back into the bush.

Shorter than expected, but every bit as wide, the party leader’s face has the sheen of effort or stress, unruly hair and tired eyes when he arrives. He plants himself and launches into a riff on how the Australian Electoral Commission is ripping off voters in Western Australia and South Australia, as well as his party, and democracy itself, by “openly predicting” the results of the day’s poll. He talks into the air and doesn’t stop until he’s said what he wants to say five or six different ways — none of which made a lot of sense to the waiting gallery.

My first thought is that it’s a set-up for failure. Coming out and criticising the messenger seems a fairly heavy-handed means of spinning what he perhaps knows is the Palmer United Party’s imminent loss.

He takes some fairly lame questions, taunting and firing back with a smirk and a “Yeh?” as a punctuation mark for his more pointed barbs. We all want to know about his numbers, but he bats us away by suggesting we be patient and that he’ll let us know when he’s won. I don’t think I’m alone in thinking of the Titanic.

He leaves, and we try and cobble some sense out of his statement and confer sagely among ourselves that he looks like a goner. Brenton, the media rep, seems nonplussed and partakes of the catering, quietly. Media folks in this context are not so much there to say or do anything, rather just to make sure none of us wanders away and starts sniffing about. He eats roast vegies and beef as he keeps a gimlet eye on us.

On TV, the result rolls on, promising the predicted victory for Tony Abbott and no sign of the shock that would descend upon us. The big numbers showing early for “others” has passed me by as I hammer out my copy on Clive.

While outside getting some air, I notice Brenton telling a bewildered PUP volunteer where the real party is — to which we riff-raff did not seem to be invited — and I’m the only one who hears it. So, sniffing a scoop, I follow them at a discreet distance and find the PUP shindig well underway at the resort’s Captains Table Restaurant.

But I don’t see Clive inside and the door has security anyway, so I don’t bother to find a way in. I get lost trying to wind my way back to the media room and panic thinking I might miss something. I stumble onto the PUP tally room, staffed by rows of yellow-clad party hacks lined down a centre table, crunching the numbers. They crowd into what looks like a broom closet. The door is open, and light bleeds into the darkness. I consider losing my media tag and innocently wandering in to ask a few questions, manufacturing a story. But, I figure I’ve got to get back — so I push on and get pains in my guts as I get more and more lost.

“Palmer rates high on the charisma meter and possesses a Joh-like media dynamic, treating us like hecklers in a stand-up routine …”

Back in the media room, gratefully, and we all wait as the result twists like a knife in the stomach to reach its inexorable and heart-breaking conclusion — death for us all. The ABC is close to calling Fairfax for Palmer. “Clive is about to make a statement!” says Brenton with the same energy of a 12-year-old yelling “food fight!”. We scramble and follow him up to the restaurant I had just come stumbled back from just minutes before.

Palmer lets us wait before he shambles out into the white media lights to announce victory. The hair is more unruly, the bed of his face more slept in, but he doesn’t look as, er, tired and emotional as you might expect. He lets us know he’s surprised he didn’t win by more, thanks everyone — including the Liberal National Party candidate who looks to have finished second — lets us in on the fact that he reckons up to three more House seats and at least one Senate seat are as good as in the bag and dumps on the Murdoch press — the AEC seems now to be acceptable now he’s won — and on foreign intervention.

“We can win the whole country in the next three years,” he informs us, and for a moment we stop and hear the world turn.

Palmer rates high on the charisma meter and possesses a Joh-like media dynamic, treating us like hecklers in a stand-up routine, as foils rather than foes. As a populist and media performer, he is perhaps, currently, without peer. As a policymaker and balance-of-power holder, he is potentially chaotic.

He invites us all in for a drink. The Palmerites, unsurprisingly, all look pleased with themselves. Or maybe they’re just pissed. A disembodied Tracy Chapman belts out Talkin’ About a Revolution above the self-congratulatory hubbub, and the gathering falls into itself, with Clive, like a vortex or a black hole, sucking the energy into him where ever he goes. The song makes a nice rounded commentary on the day; Palmer had tweeted that morning it was a fine day for a revolution. Which it was. Weather wise.

When the Gillard government made its first announcement in 2010 that it would wind back the mining tax, thus saving the mining industry a lot of money and not a few headaches, the entry of the dirt diggers into modern politics looked complete. Since then, with Gina Rinehart and now big Clive buying up power-laden real estate — a bought corner of the Fairfax boardroom, a paid-upfront three-year lease on a room in the Canberra Big House — the mining sector speaks even louder, perhaps of a volume to rank with the days of Essington Lewis and BHP’s bloodless wartime coup of national industry.

We now have two portly, blustery, loose cannon miners with seats in Fairfax. While those Fairfaxes are different ones, they both count for something significant.

With Clive, we have someone richer than Malcolm Turnbull. We have someone who owns more than the value of every parliamentarian’s annual wage and someone who might unblinkingly use his own parliamentary salary for spare-rib napkins without bothering his accountant. What he brings, however, is anyone’s guess.

Maybe it’s us, the nation, that is actually the Titanic and that looming iceberg is a massive mountain of cold, hard money. Maybe we should stop cruising and make this Titanic into a battleship.

Onef ifth of the vote? Or 5% ie one twentieth?

There are plenty of rich bitches in Government—they are in the APS! Using your public money to fund their friends in law, accounting and consulting firms…How about the lobbyists? They are not as visual as Clive…As for Palmer’s PUPS i.e fallen soldiers and ex-Rugby players—he chose them well i.e. people who will never threaten his draconian ego-maniac ways!