Rundle mythbusts the campaign that was (part two)

We all know why Labor lost: Kevin Rudd, the narcissist, undermined Julia Gillard at every step and then exploded because of the chaos of the campaign. The only problem with that narrative is none of it is true. Let's look at the facts ... 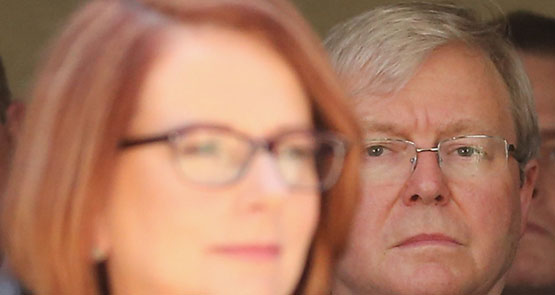 Yesterday, Guy Rundle put some of the myths about Tony Abbott’s victory to the test. Today, part two — the campaign itself …

1. “Labor was on track to win with Gillard, there was a plan, and it was all disrupted by Rudd’s relentless leaking against Gillard.” John McTernan, former Gillard adviser — and the Ed Wood jnr of Labo(u)r spin — has been spruiking this argument recently. Also in the “Rudd dudded it” chorus was Emmo — in harmony for the first time ever – and Swanny, the name for a popular tin whistle.

No doubt there was a plan to get Gillard out of the basement of a 29% primary vote poll. But no doubt it was as crappy as every other idea that the Gillard massive came up with, from the attack on 457s masterminded by a man on one to double-crossing Andrew Wilkie, from calling an election eight months early on a high Jewish holiday to the curious mix of lack of resolve and bastardry that characterised action on the boats, from the Rooty Hill expedition to the “blue ties” remark, from denouncing misogyny and then getting a selfie with Kyle Sandilands to the women’s mag knitting spread, from … arggghhh …

Yes, Rudd plotted against her, but he didn’t do any of that. That was all unforced errors on team Gillard’s part. Their fallback argument is that Rudd’s white-anting led to the compromised 2010 result. Maybe, but nobody forced her to make an unnecessarily formal agreement with the Greens, to promise “no carbon tax” and renege on it and then try to lawyer-argue out of the charge — or if anyone did, it wasn’t Rudd. Adam Bandt would never have voted down confidence in Labor, for the sake of his own survival.

2. “Kevin Rudd’s return to power made no difference to the eventual result.” There’s no evidence for this. The results indicate that the polls have been substantially correct throughout. For most of the last year, Gillard was running at 56-58/44-42. She would have faced the same polished Abbott campaign, the same virulent Murdoch hatred, and would have had no room to maneouvre on boats and the carbon tax. There’s no reason to believe her campaign would not have been as hapless as the politics of the years that preceded it. Rudd got 34% by losing primary votes from his recent polling high. Gillard would have had to gain 5% to get her into that territory.

3. “Kevin Rudd is a clinical narcissist and the Liberals successfully targeted him with a secret plan, informed by a psychiatrist.” Rudd, by all accounts, has more narcissistic qualities than many politicians, but he’s more egotistical than narcissistic — i.e. full of himself but also functioning in the world. Egotists join the local am dram society and use their talents to become head of it within a year. Narcissists join an am dram society and start practising their Oscar speeches and booking hotel rooms in LA. The theory, expounded by Pamela Williams in the AFR, is that the Libs targeted Rudd’s narcissism to make Rudd explode. Maybe that informed their OTT argument that this was the “worst government in Australian history”.  But Rudd didn’t explode, publicly. Not even during the debates. The crappiness of the campaign was in the lack of organisation and content. If the Libs did thus target him, it was part of their overweening hatred of the type of man Rudd was, their inability to see his passions as anything other than sham.

4. “Rudd’s chaotic progress was due to his arrogance and disregard of head office plans and resources.” Maybe. Or maybe the party centre decided that this one was lost and sat on their hands, leaving Rudd without policies or “announceables” — and then to take the blame. Perhaps that is why Rudd has decided, or so he says, to stay on as a backbencher.

5. “Labor’s problem is that it has culturally alienated itself from western Sydney and other areas, from the battlers.” Warren Mundine says some of this in a content-free homily in the Oz on Monday. Labor didn’t change culturally from 2007 to 2013, and the idea that the people of western Sydney vote on who drops the most aitches is absurd. The success of Labor over several decades is such consistent high wages, home ownership and invested superannuation that many working people’s real interests — and their view of the economy — have changed. When working and middle classes were less prosperous, their interest was in a higher-taxing, higher-spending state. When their interests are invested in the market, they start to read the economy like a balance statement. Hence the widespread angst about debt and deficit — even though economists argue that it was both necessary and not onerous. Gough Whitlam, the haute-bourgeois onetime poet, won western Sydney, and when he lost it, it wasn’t because he quoted too much Latin.

6. “The Greens’ result shows they’re on the way out.” The 8.4% result is a disappointment — born of a plunging vote in Tasmania due to the state government, a bit from the Bob Brown departure, and a bit from Palmer UP stealing some of the anti-establishment vote. The Tasmanian result was a particular reminder to the Greens that — as your correspondent noted when McKim’s Greens joined the government — they should retain a position outside government and in oppositionality, even when they vote confidence to a Labor government. However, there was also a simpler fact that the Greens vote dipped because of a strategic decision to throw substantial resources into particular seats and states — Melbourne and South Australia — which meant that Greens were going after steadily more expensive votes to get over the line.

7. “Clive Palmer will disappear.” Yeah, maybe, just like he made no impact on the election. The alternative is that with an eventual name-change to a more generic title, the party will form the base for a low-tax libertarian political fo-…..nah, OK. They’ll collapse in a heap and he’ll get bored.

The Greens apparently disastrous primary vote is the second-highest in their history. It’s also better than every result the Democrats achieved in their 80s/90s heyday (1990 aside). If the current predictions are correct, they will have their second-best ever result in terms of Senate seats, bringing them to a total of 10 (more than the Democrats high water mark), and they have held a lower house seat for two terms, something no other minor party has managed federally since Lang Labor.

How did the Gnats pole?

Guy, you’re wrong about Rudd’s narcissism. I reckon you do not understand narcissism.

If you look at all the evidence of two-faced dealings, micro-control, ignoring others, belittling people, lack of affect, lack of empathy, need for immediate attention, inability to vocalise clearly etc then the case for him being narcisstic is difficult to argue against.

Interesting to see Emerson play out like a typical N’s victim. Very common no one believes them and they think the victim is the crazy one.

Thank you Guy, some actual facts. Rudd is actually more shy and self-deprecating in public than egotist. I met him when he was reading Dark Victory and campaigning against the invasion of Iraq .

The main reason the chancers, spivs. and machine men in the ALP don’t like him is because she stares the morons down.

Dr Dagg, you do realise all the crap you read about Rudd comes out of the spiteful rantings of Murdoch rags don’t you?