Bill Shorten getting the backing of Labor Right faction demonstrates exactly what is wrong with the Labor Party. Plus other political snippets noted along the way.

A pity if no ballot. It is wonderful to behold the way that the remaining Labor members of federal Parliament are trying to avoid implementing that Kevin Rudd rules change to give ordinary branch members a say in choosing the leader of the parliamentary party. You can forget all that talk about the need to present a united face to the public. The attempt to have just one candidate and thus to avoid anything inconvenient like a ballot is nothing more than the normal suspects struggling to retain their back-door control of the party.

Nothing illustrates this better than the rallying of the trade union-dominated Right of Labor behind Bill Shorten as the preferred future leader. Shorten personifies everything that is wrong with the party, which was beaten so decisively at the weekend. Hopefully Anthony Albanese will have the strength to make a leadership contest and encourage a vigorous debate within the party about what it should stand for.

The view of the public on Syria. I would be surprised if Australians thought any differently to Americans when it comes to what action should be taken against the government of Syria. The latest Pew poll shows a strong growth in opposition to taking military action. 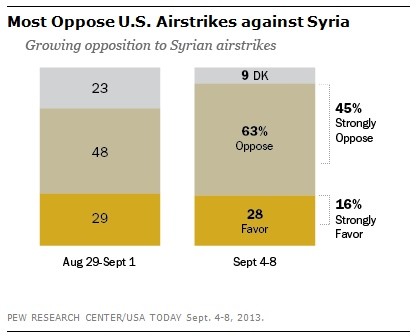 Having vilified Julia for years, now Farmer has decided to get stuck into Shorten. Is it because Shorten is obviously an intelligent chap with good ideas and the capacity to communicate them that Farmer really dislikes him? Is Farmer a Liberal mole? Albo is a good bloke but hardly charismatic. I think Shorten is the hope of the Labor party.

Labor/limbo – “How low can you go?” – you can’t put any better than Chubby Checker?

[“The Shorten Principle”? He sure is.]

“the normal suspects struggling to retain their back-door control of the party Nothing back door about them, the front is on Sussex St.