The election result has boosted the market, as has Obama's decision to stay out of Syria for the time being. 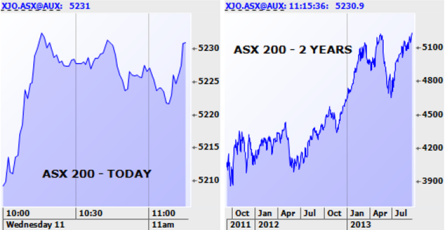 Mining stocks up again on yesterday’s Chinese data that included strong industrial production and retail sales numbers and followed up on better than expected trade figures and PMI numbers in the last week.

The tapering threat has also backed off with expectations that after the weak US jobs numbers on Friday next week’s FOMC Meeting will do little more than suggest a token reduction in quantitative easing.

The A$ has jumped over 93c to 93.12c as the US$ falls, the NAB business survey suggests business confidence was picking up even before the election and as the Chinese numbers improve.  Technical resistance on the A$ is at 93c.

European markets up. Some markets including Germany, France and Spain up close to 2%.