The iSentia media coverage list looks about as it will for the next three years -- Tony Abbott, Joe Hockey and Bill Shorten are likely to lead the list most weeks, with a smattering of Liberal ministers filling it out.

Winners are grinners, folks. This week’s post-election media coverage chart shows Prime Minister-elect Tony Abbott ruling the roost. Apart from perhaps the day his opposite number is announced and barring scandals among his elected colleagues, he can expect to hold our top spot for almost all of the next three years, after voters soundly punished the ALP at the polls for being unable to manage itself.

In fact, most of the list below might become eerily familiar, although Julia Gillard will be gone and most ALP supporters will be desperately hoping Kevin Rudd finally learns the art of silence as well. But Abbott, Bill Shorten, Joe Hockey, that’s probably your standard top three right there, if the ALP watchers are right. Speculation about the other possible Labor contenders — Anthony Albanese and Tanya Plibersek — brought them high on our list too.

Independents Adam Bandt and Andrew Wilkie were big electoral winners, so it’s no surprise to see them heading north here, but our guess is it will be the half-dozen or more Lazaruses rising from the Senate crossbench (sorry, we had to get the pun in early) who will be far more regular entrants in this list over the next three years, as they ruminate on what to pass and what they want for it.

Former Treasurer Wayne Swan retained his seat too, saying he’ll remain on the opposition backbench and work for his electorate, careful in victory to avoid the type of vengeful attacks on his colleagues that caused the ALP to lose the election. And finally, watch this space for the addition of Clive Palmer, who looks likely to join these ranks soon. If he wins his seat, getting media coverage will be guaranteed. 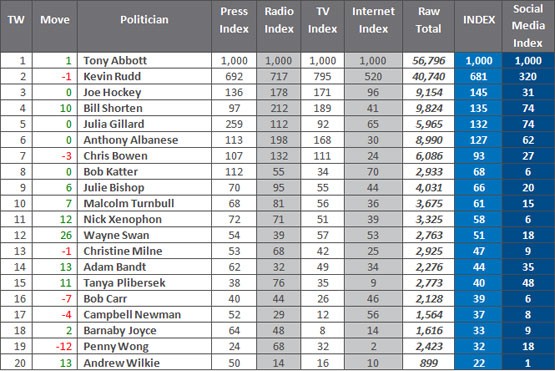 Putting our new PM aside, it is speculation on who will lead the ALP that has dominated talkback since Saturday night.

Rafael Nadal won the US Open, beating Novak Djokovic, who had almost as much as Eddie McGuire to say about the fixtures.