New York City Democrats will rally around Bill de Blasio to tip Michael Bloomberg out of the mayor's job, a candidate who has successfully adopted the Bloomberg swagger. 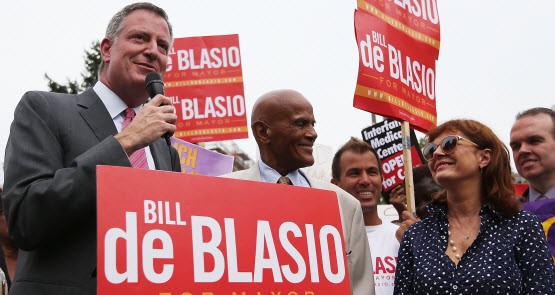 For 12 years, mayor Michael Bloomberg has been Mr New York. The billionaire Republican from the Upper East Side trumpeted the stop-and-frisk policy as making the city safer, introduced a bike share program and (failed) soda ban, and extended city laws to allow himself to run for a third term.

So perhaps it’s no surprise that the mayoral contestant billing himself as the anti-Bloomberg won today’s New York City primary vote, making him the likely Democratic nominee in November’s election.

Bill de Blasio (pictured above) is a New York City Public Advocate from Brooklyn’s Park Slope, home of food co-ops and hipster parents. He promises to tax those who earn over $500,000 to help pay for kindergartens. He framed his campaign around the idea of New York as a “tale of two cities”, rich and poor, and speaks often about housing affordability and unemployment. He calls himself “the true progressive choice”.

“Someone who wants the economy equally strong in all five boroughs is very important,” said Erin Lloyd, a 36-year-old attorney from East Harlem, when asked why she had voted for de Blasio. Meanwhile, Bloomberg was regularly criticised as being a mayor for the wealthy in Manhattan.

Votes are still being counted — if De Blasio wins less than 40% a run-off between the top two contenders (either former Comptroller — a great word to describe the city’s chief financial officer, an elected position — Bill Thompson or current city council speaker Christine Quinn) will take place on October 1. Serial s-xter Anthony Weiner will battle it out for last place with councilman John Liu.

“It was between him [de Blasio] and Quinn,” said Amanda Dubois, a 33-year-old university employee from East Harlem, speaking outside a voting booth on East 113th St. “But Quinn has the same policies as Bloomberg, so …”

De Blasio is the only mayoral candidate against Bloomberg’s stop-and-frisk policy, which allows police to stop and search any person they suspect may have done something wrong. As a federal judge ruled last month, in practise it means police stop many “blacks and Hispanics who would not have been stopped if they were white”. De Blasio is white, his wife is black and one of his political advertisements shows how both discuss with their son the likelihood that he will one day get stopped by police.

But don’t go thinking this election is based on policy alone — one of the biggest drivers of support for de Blasio has been his 16-year-old son Dante’s hair, a natural ‘fro that makes him nearly as tall as his 6’5″ dad. As The New York Times headline read after de Blasio announced his mayoral nomination in January, tongue firmly in cheek: “De Blasio’s Announcement Is Upstaged by Son’s Hair“. A fortnight ago de Blasio even tweeted a drawing of his son, with the caption “RT if you #GoWithTheFro“.

There’s been criticism from Bloomberg that de Blasio is cashing in on his biracial family to win votes, with the current mayor telling New York Magazine:

“I mean he’s making an appeal using his family to gain support. I think it’s pretty obvious to anyone watching what he’s been doing … It’s comparable to me pointing out I’m Jewish in attracting the Jewish vote.”

De Blasio’s 20-year-old daughter Chiara (who appeared in a celebrity-filled advertisement for her dad) said in response:

“I think that, or at least I suspect, 20 years ago my dad did not know he was running for mayor and he did not seek to marry a black woman to put her on display.”

But support from specific minority groups sure helps in a city of 8 million people when only around 800,000 Democrats were expected to vote today.

A Puerto-Rican born councillor covering East Harlem and lower parts of the south Bronx, Melissa Mark-Viverito is one of de Blasio’s key political supporters in the city. De Blasio spent yesterday in Spanish Harlem with her and Mark-Viverito was confident of an easy win for her political ally when she arrived at the polling booth at 9am this morning: “We haven’t elected a mayor in 12 years. Let’s hope we don’t have to go through a second round.”

Voting is a complicated and convoluted affair in the States, with electioneering and all promotional election material banned within 100 feet of the polling booth. Mark-Viverito got into a yelling match with election officials because she was wearing a de Blasio T-shirt under her suit and a campaign sticker on her suit lapel. After she removed the sticker and hid the shirt, she was allowed to vote in a six-foot walk-in antiquated mechanical machine.

And how was voter turn out? “More than expected,” said Maryann Paredes, the door clerk at the E 113th St polling booth. “Since 6am, there’s been people coming in.”

To Crikey’s Australian eyes, it seemed just a trickle of people, with far more election workers than voters.

But in a city where Democrats outnumber Republicans 3.2 million to 500,000 — and yet the last two mayors have been Republicans (and Rudy Guiliani nearly became the Republican presidential nominee in 2008) — one should never underestimate this tale of two cities.

So they did “hide the Weiner”?