After 9/11, they may take their purses but never their freedom

The United States has traded liberty for security, with a vast domestic spying program and unprecedented security measures. Does that mean the terrorists have won? 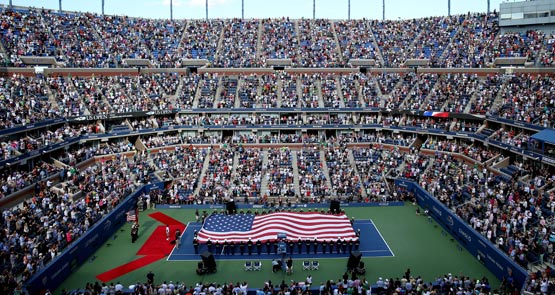 As the United States today marks the 12th anniversary of the September 11 attacks, there is a growing sense of unease. Those here accustomed to long lines and inconvenience in various aspects of their existence are finding, say, the act of attending a major public event much more difficult of late.

Take the opening day of the recent US Open tennis tournament at New York’s Flushing Meadow. Play that morning was conducted in front of half-empty grandstands. Outside, fans endured a two-hour wait thanks to organisers’ newly implemented security procedure.

This is post-Boston, post-9/11 America: a war-wearied, inwardly focused country split along bitter partisan lines, with a public beginning to question how many more liberties will be sacrificed in the name of fighting terror. It is also an America where, in the political realm, the George Costanza mantra — “it’s not a lie if you believe it” — can ring true.

The elongated lines at the tennis were the result of a new directive: fans enter via metal detectors as the Open now employs “airport-type security”. The good news, a US Tennis Association spokesmen declared minus any sense of irony, was that fans were not forced to take off their shoes or belts.

There were similarly farcical scenes last month during the football pre-season. Fans were shocked to arrive at games and discover that women’s purses larger than a mobile phone are suddenly prohibited at NFL stadiums. The only bags allowed are small, clear plastic ones. Thermoses and seat cushions are banned, as are camera cases, backpacks or shoulder bags. The chief reason given: this year’s Boston Marathon bombings.

“Does this mean the terrorists win?” New York Magazine mused dryly. For those enduring lengthy lines to check their purses or paying the $12.95 the NFL cynically charges for a clear plastic bag exposing their tampons, chewing gum and electronic devices to the world, it’s a salient question.

To the outsider, the US is a fascinating land of contrasts and contradictions. Take the initially ambivalent reaction of most Americans to the news leaked via Edward Snowden that the National Security Agency was basically spying on them. In a Pew survey conducted soon after, 62% agreed with the statement “fighting terrorism is a higher priority than privacy”. Federal, state and local law enforcement here have already inured Americans to this sort of thing. The notorious Patriot Act of 2001 saw to that.

A National Journal survey found 85% of Americans assume their “communications history, like phone calls, e-mails, and internet use” is “available for businesses, government, individuals, and other groups to access” without their consent. And despite what we know about what they do with our information, who but the most paranoid has stopped using Facebook, Gmail or Skype?

“Despite recent brutal massacres in Colorado and Connecticut, the juxtaposition of the aggressive nature of terrorism prevention and the politically fraught issue of gun control remains.”

Historian Jill Lepore has written of the paradox of an American culture “obsessed at once with being seen and being hidden, a world where the only thing more cherised than privacy is publicity”. Compare also the early apathy around the Snowden disclosures to, say, the theatrical outrage scorned on Michael Bloomberg, a man many Americans view as a rich do-gooder trying to tell them how to live, and his attempted ban on super-sized sugary drinks in New York last year.

Yet in the wake of more disclosures, public uneasiness has slowly increased. The government has been forced to acquiesce to disclose more data on secret court orders and the national security letters it uses to collect data on Americans.

With President Barack Obama facing an embarrassing breakdown in his unpopular push for military action in Syria, he has also had to assuage angry leaders of allied states such as Germany and Brazil regarding the level of spying his country is conducting on theirs.

Yesterday, The New York Times ran this chilling revelation: US airports customs areas have become a back door for the government to “seize and examine traveller’s electronic devices instead of obtaining a search warrant to gain access the data”.

Still, when iffy measures taken under the guise of preventing terrorism cause disquiet, the unrest rarely seems to go anywhere. Who wants to be the person who allows another attack to happen on their watch?

Which is where the Republicans and their Costanzaisms come in. Last weekend, a gaggle of House Republicans, led by failed presidential candidate Michelle Bachmann (currently under investigation for campaign fraud), visited Egypt for a conference to convey to the new government just how much of a swell job they’re doing. Bachmann went a step further, suggesting that the terrorist attacks of September 11 were the fault of the Muslim Brotherhood, not al-Qaeda:

The conference in Egypt was described in the Times as “unbelievable, ludicrous, almost comic if it wasn’t so painful”. A research director at the Brookings Data Centre declared it disturbing members of Congress appeared “so unaware of the basic facts of 9/11”.

One further issue confounds. Despite recent brutal massacres in Colorado and Connecticut, the juxtaposition of the aggressive nature of terrorism prevention and the politically fraught issue of gun control remains. Although terrorism provokes the most fear here — and unquestionably the most aggressive government and law enforcement spending — gun control flounders in and out of public consciousness.

While the number of deaths related to terrorism in America this year sits at four, according to Slate‘s gun-death tracker, 7907 people have died as a result of gun violence in the US since the Newtown Massacre last December.

Franklin, Jefferson, Lincoln and Eisenhower would not approve.

Iron mixed with clay? Or is God really dead and the US hasn’t got the memo? #Übermensch

Why am I reminded of a certain Bavarian town?

For years this anniversary has been such a big media event – did it pass this year without their remark? I’d forgotten about it til today.