‘Victory Ride Down Under’: how the world’s media covered the election

Tony Abbott's victory has been widely reported from London to Beijing, with each country's national media taking a slightly different tack. And then there are those cycling photos ...

Australia’s election was widely reported overseas, with plenty of papers enjoying the pics of Australia’s lycra-clad new prime minister. If this is how much fun they had with the lycra, imagine if Tony Abbott had appeared in budgie smugglers during the campaign …

The UK and New Zealand media ran extensive coverage, while China and Papua New Guinea focussed on issues that mattered to their respective countries.

Very few international newspapers put the election result on page one, but The Wall Street Journal, now owned by Rupert Murdoch’s News Corp, put Prime Minister-elect Tony Abbott in all his lycra-clad glory below the fold: 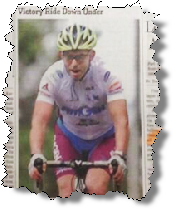 The Journal ran an opinion piece from Spectator Australia editor Tom Switzer. In “The Triumph of Tony Abbott“, Switzer writes:

“According to the conventional wisdom of just a few years ago, Tony Abbott should never have become prime minister of Australia …

After all, Mr. Abbott is skeptical about alarmist claims of man-made global warming. He is a former Catholic seminarian who opposes abortion and same-s-x marriage. His gaffes — he recently said a female parliamentary candidate had “s-x appeal” — have provided fodder for left-leaning satirists …

He had the courage to broaden the appeal of a conservative agenda rather than copy the policies of his opponents. As a result, Australians enjoyed a real choice at the polls this weekend. Mr. Abbott’s resounding victory shows that they relished this opportunity to chart a more free-market course.”

“When Australia’s incoming prime minister, Tony Abbott, declared victory in the national elections held over the weekend, he pledged to swiftly enact the ambitious legislative agenda he had outlined on the campaign trail …

“But Mr. Abbott, who during four years as opposition leader made his name as a ferocious opponent of the governing Labor Party’s agenda, now finds himself in unfamiliar territory, analysts say. The lawmaker known as ‘Dr. No’ must learn to enact legislation, rather than simply criticizing it.”

Chinese newspaper China Daily put a pointer on its front page, with the accompanying story focusing mainly on the carbon tax: 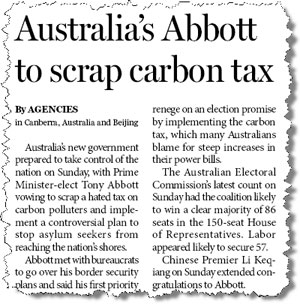 The China Post ran a wire story, “Abbott to lead Australia, Labor’s Rudd to step down“, on its front page. 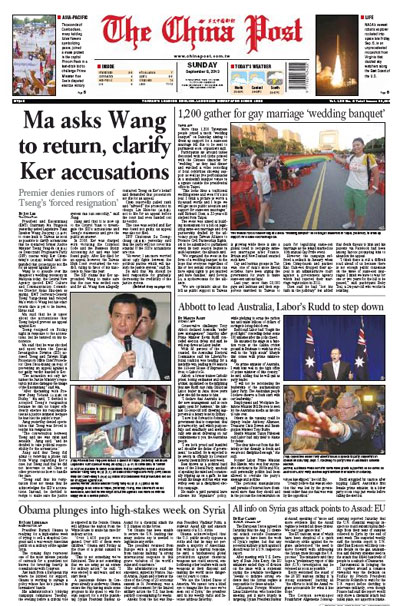 “Abbott, a former trainee Catholic priest, boxing enthusiast and monarchist, capitalised on the infighting that saw Rudd oust Julia Gillard as Labor leader in June, three years after she did the same to him.”

“The election of a new government in Australia should augur well for Papua New Guinea-Australia relations with key Liberal Party figures already committing to building on the relationship.

“However, discontent in Manus over benefits expected to flow from the Australian-funded regional migration processing centre confirms that the government of Prime Minister-elect Tony Abbot needs to get to work immediately upon entering office to avoid a confrontation between disgruntled landowners and the centre’s contractors and service providers. Head of PNG Business Council Ernie Gangloff and Chey Scovell, head of the Australia Business Council and the PNG Manufacturers Council, told the Post-Courier in separate interviews last night that Deputy Liberal Party Leader Julie Bishop had assured PNG leaders in her previous visits that they would build on the PNG-Australia relationship that was put back on track by the Labor government.” 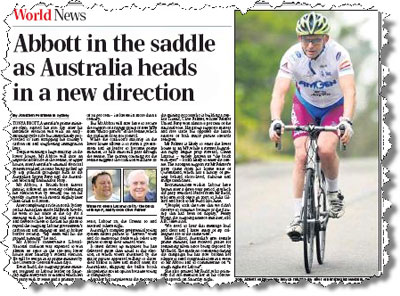 “Mr Abbott, a British-born fitness fanatic, followed an evening celebrating his election win by setting out on his weekly journey with friends slightly later than usual at 6.30am.”

Across the Tasman The New Zealand Herald ran “Abbott gets straight into gear for new Coalition reign” across both pages of its world section, with details of individual seat results, Labor leadership speculation and the resignation of Simon Crean and Martin Ferguson: 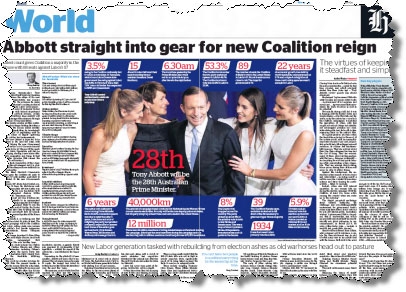 Near the end the story also mentioned Abbott’s Kiwi connection:

“His New Zealand-born wife Margie popped out for a few groceries, still coming to terms with looming changes to family life. ‘It’s a little surreal,’ she told reporters.”

Switzer’s contribution :- so what do you call a Right-leaning satirist, in a Murdocracy – “journo”?

FRom the Jounal “He had the courage to broaden the appeal of a conservative agenda rather than copy the policies of his opponents. As a result, Australians enjoyed a real choice at the polls this weekend. Mr. Abbott’s resounding victory shows that they relished this opportunity to chart a more free-market course.”

Obviously they don’y have a clue. Apart from PPL, Fraudband and Axe the Tax Abbotts policies were identical

Yes, Pav, it would seem that very few of the right wing propagandists, actually listen to the policy pronouncements of Super Tony. Certainly, none of them seem to believe him, when he claims that he believes in climate change and that he will cut Australia’s emissions.

I thought he meant/said he was “going to cut Australia’s omissions”?

Maybe it was diplomatic missions?