On the ground at Burning Man, a cavalcade of counterculture

Freelance journalist Hari Raj takes in the cavalcade of art, costume, nudity and general weirdness that grows every year in the Nevada dessert.

A long way past midnight on what might have been Thursday, I met a woman in the desert wearing only a backpack and a smile. Her teeth chattered while we chatted about her son, and neither the leggings she later donned nor the huddle of people who joined us to wait for the sunrise could stop them. I lent her my favourite poncho, the sun painted the sky with pastels and fire, and I forgot to ask for it back when we left. Later, I consoled myself with the knowledge that this nameless, friendly stranger was warm — and then, that afternoon, she walked right past my camp.

“There you are,” she said, utterly unfazed by the karmic Brownian motion that had again sent us careening into each other. “Here’s your poncho. Also, I made you a hat. And would you like a brownie?”

Burning Man is full of stories like this, and over the past three decades it has steadily filled up with people. In 1986, Larry Harvey and a handful of friends gathered on a beach in San Francisco to set a wooden effigy of a man on fire. This year, some 68,000 people came together to create a city–  one that they will pack up and take with them when they go, leaving nothing but dust and memories.

Every year, in the last week of August, the impossible flower that is Black Rock City blooms from the Nevada desert. It is an oasis of ideals and imagination that at times feels like the love child of Mahatma Gandhi and Lewis Carroll, a cavalcade of counterculture arrayed clockwise around the central figure of the Man. The 2013 iteration has him astride a flying saucer, in keeping with this year’s theme.

Explaining the appeal of Burning Man is a swift road to bafflement. The most common question I was asked about was which bands were playing, the next was how I showered. Mumbled negatives to both certainly didn’t help. The alkali flat on which it takes place is one of the most inhospitable places on Earth. Nothing lives there, no wildlife or vegetation. There is no food. There is no plumbing. The sand is so thirsty that spilled water disappears in seconds.

Once you’re past the queue and you’ve set up your camp and you’re ready to wander, however, all becomes clear. Well, not quite clear — this is a bounty of visual stimulus that is as diverse and discombobulating as the interior of a kaleidoscope. The first sight to greet us was that of a 20-foot mobile metal octopus spouting flame from every tentacle. There were costumes of every description, and at least as much nudity. There were art installations looming dramatically out of dust clouds, and mine was surely not the only jaw agape.

Astonishing as this sounds, however, what goes on at night is exponentially weirder and wilder. Bicycles and people swarm past, bedecked in electroluminescent wire. The art installations are completely different in the dark, part of the carnival of neon and flame that stretches in every direction. Vehicles lovingly teased into unrecognisable shapes, laden with speakers and passengers, rumble by in a blaze of colour and music. It’s a trip even without the aid of stimulants legal and illegal, which are officially frowned upon but readily available. 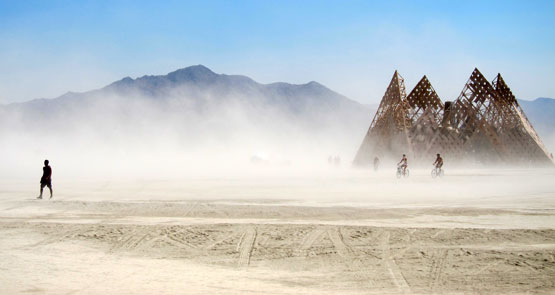 Upon arrival, attendees receive a booklet containing a list of activities hosted by the various camps that make up Black Rock City. Some of these are invitations to share food and drink. Some of these are hands-on courses in Japanese bondage or transcendental meditation. All are without cost, a manifestation of Burning Man’s gift-giving ethos. This isn’t a barter system; you’re meant to contribute and partake freely. Your burn can be whatever you want it to be — relaxed, trippy, orgiastic — but no matter how careful your planning, the distractions arrive thick and fast until it’s better to surrender to serendipity.

This utopia is not without its guidelines, among them an insistence to “leave no trace”. Everything, including wastewater, must be carted out. Self-expression is encouraged and celebrated, and experimentation takes place free of (vocal) judgment. There is a definite warmth to the interactions; a willingness to participate instead of merely observing goes a long way, whether it’s in a flamethrower shooting gallery or a soul-baring series of talks in a teepee.

Burning Man has come a long way from the disorganised chaos of its early years, when firearms were as commonplace as speed limits were not. Tickets this year went for around US$380, and they are scalped for more than four times that figure; the filtering effect of the price tag is widely discussed. Older burners still revel, but they have gripes; “weekend warriors”, those who arrive in the last two days just to party and watch the Man burn, are grumpily tolerated. One veteran complained to me that participation was “way down” this year. “It doesn’t help,” he said, “that I’ve been coming for 10 years, and every year the crowd seems to be getting younger.”

A counterpoint to the bacchanal is the Temple, situated to the north of the Man. Here there is contemplation, meditation and mourning; messages and shrines are committed to wood, all of which will eventually be burned. My third visit is more of a refuge from the sun and noise, and I bask in the silence until a woman crouches next to me and writes something on a beam. She then puts her back against it, and for a time we talk of nothing and everything. Only when she gets up to go do I see what she has written: “F-ck you, cancer.”

Next time, I want to be better prepared. Our camp ran a shisha lounge, and while it was fun to chat to strangers stopping by for a smoke, there are a plethora of more personal gifts and services to be offered. There is sustenance emotional, physical and metaphysical to give and receive, made all the sweeter for its impermanence: enjoy it while it’s here, because soon it won’t be. Sir Edmund Hillary climbed Mount Everest because it was there. The community that creates Burning Man comes together because, for the other 51 weeks of the year, it is not.

Slow, not steady, yet not a race

More detail would have been appreciated but it is a reminder that its antithesis, Woodstock, was the beginning of the end for an alternative society. It was conceived and advertised as a “music & arts” convocation – ie people would come and participate, showing what they could do and what they hoped to do.
Instead it was a quarter of a million over entitled kiddies sitting around in the mud, waiting to be fed & entertained by grown-ups and assorted bread-heads.
And thus the next 30-40 years was grounded leading to Nixon, Raygun and assorted Shrubs.