The market remains buoyant, but many companies aren't as fortunate. 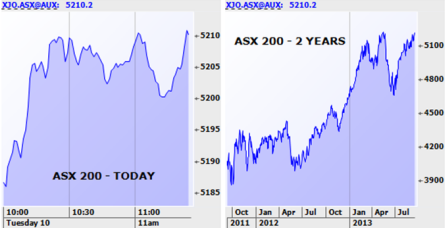 The Market isup 28 points.Dow Jones was up 141. It was up 166 at best.
S&P 500 was up 17 to 1672.
The threat of military action in Syria subsided a touch as Syria said they welcomed a plan put forward by Russia for Syrian chemical weapons to be put under international control.
The US followed the lead of the Japanese market that was up 2.48% yesterday in response to the Tokyo 2020 Olympics win and the revision of a second quarter GDP number from +0.6% to +0.9% with the annual number up to +3.8%.
The US also responded to the Chinese market that was up 3.38% on a string of positive economic releases the main one being trade numbers in which imports grew 7.0% (Est +11.3%) and exports were up 7.2% (Est +6.0%).
Mining stocks up on the Chinese data. Caterpillar up 2.6%.
Tapering also seems less likely post the weak jobs numbers on Friday.
Gold was up 20c.
The A$ is still above $92c at 92.26c as the US$ index dropped below 82. Recent support for the A$ has come from good Chinese numbers, a fall in the US$ post the weak jobs numbers on Friday and some optimism about Australian growth post-election. Technical resistance on the A$ is at 93c. NAB Business confidence numbers and Chinese industrial production numbers today will have some bearing.
Iron ore price up 70c to $134.80 after a $3 fall yesterday.
The US bond market was up — 10 year yield down two basis points to 2.918%.
Obama says he will address the American people tonight on Syria after the vote in Congress tonight. The media is giving a lot of airtime to Americans that are against it and to Syrian citizens that fear it.
Potash stocks up as Vladimir Putin said the potash cartel dispute needs to be resolved. Mosaic up 5.1%.
Apple up 1.6% ahead of the product refresh announcement tomorrow.
BHP was up 2.16% in the US overnight. The stock closed in the US up 31c on the close here yesterday. RIO was up 2.56% in the US.
The oil price down 1.01%.
European markets mixed. Greece up 4.05%, Italy up 1.16% with FTSE down 0.25%.
Metals mostly down. Copper up 0.46%.
Tonight in Europe — French industrial production.
US Economics overnight — Consumer Credit: Actual $10.4B, consensus $13.0B, prior $13.8B (revised $11.9B)