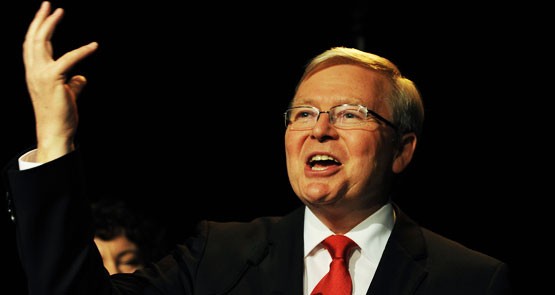 Key Kevin Rudd lieutenants have rounded on former frontbencher Craig Emerson’s slapdown of the Honourable Member for Griffith, telling Crikey the two-time PM saved the party from electoral oblivion and should be respected.

Emerson, Julia Gillard’s former partner, told the ABC last night that Rudd should quit politics for good after Labor’s defeat in Saturday’s election: “Anyone … who is so hell-bent on revenge, who is so destructive, as to depress the Labor vote in the 2010 election shouldn’t be rewarded for that sort of behaviour,” Emerson said.

“He came back as prime minister, the election was a disaster for Labor and Kevin Rudd’s continuing presence in the parliamentary Labor Party will see him do what he has always done, and that is willingly, wilfully, recklessly, destabilise Labor leaders.”

The Whyalla Wipe Out performer was responding to a confirmation from Victorian ALP Senator Kim Carr that Rudd would see out his three-year term as a federal MP.

NSW Senator and former parliamentary secretary for homelessness Doug Cameron hit back at Emerson this morning, telling Crikey he was wrong and Rudd critics were intent on prosecuting personal grudges and conspiracy theories. “This lack of respect and personal animosity and lack of courage from some people that didn’t take these issues up with Kevin Rudd when they were in senior ministerial positions just leaves me cold,” he said.

“I take the view that we need to move on from this. And the issue for us is to become a strong effective opposition and all my energies are about that and not relieving some personal slight or some conspiracy theory from the past.”

If a byelection were held in Griffith tomorrow, the Labor candidate would likely lose to popular LNP candidate Bill Glasson, further reducing the party’s representation when every seat will be crucial in the lead-up to the 2016 election.

Cameron said a return to the polls in Griffith so soon after the election would be a ridiculous outcome: “I don’t think we need a byelection at the moment. On a pure political analysis why would Labor want a byelection in a seat that was held?”

And Rudd was successful in saving the party’s political furniture, as promised, estimating around 20 lower house seats were saved. “The former Prime Minister should be treated with a bit of respect. I am of the view that he has put a 5 in front of our number of House of Representative seats, rather than where we were heading with a 3 in front of it,” Cameron said.

Holt MP and former Rudd parliamentary secretary Anthony Byrne also slammed Emerson’s prime-time appearance: “it was a very unhelpful intervention by Mr Emerson last night … public character assessment is a very dangerous business. I think the public has heard enough about the internal machinations of the Labor Party to last a lifetime.”

Bruce MP and key Rudd numbers man Alan Griffin said the blame should be spread evenly and no one should be singled out: “Everyone in the party has to take responsibility for various events that have occurred. No one is blameless. We also have to properly consider what has taken place and evaluate it thoughtfully.

“I can understand why people can react out of anger, but we all need to consider the facts to understand the lesson of the past so we can get the future right. I don’t agree with Craig’s interpretation but I think he raises some issues that people need to think about.”

There is likely to be an outbreak of extreme bloodletting in coming weeks as Labor moves to dislodge pent-up angst among the caucus who will be looking to get the shit off their livers.

It hasn’t been just Emerson keen on attacking the reputation of sitting MPs. Gorton MP and Gillard loyalist Brendan O’Connor, rumoured to be stepping down himself sometime during this term of parliament, took to the airwaves this morning to take a knife to Australia’s 26th prime minister. He told Sky News’ AM Agenda program that Rudd must “contemplate” sacking himself: “If you have a former prime minister sitting in your party room, on the backbench, that spectre looms large … it’s in the best interests of whoever is the leader for him to contemplate leaving.

“He’s already made the right call in stepping down as leader, I think he was right to do that. He now has to make that further decision and I think it would be the general view that we’ve got to move forward, draw a line in the sand, and it’s better for him to leave.”

A tale of two election reviews, by the NSW and Vic ALP

Members of the ALP should follow Tanya Pliberseck’s lead and just not say a word on who was to blame for the defeat. The main lesson of the election was that disunity discredits you. Everyone can have their own opinions on who is responsible for the disunity but they do not need to air them. It only helps the Coalition, which is busy attacking Rudd as a wrecker after having done their utmost to use disunity in the ALP for their own advantage.
It is bad enough seeing Abbott strutting around puffed up with pride, and Brandeis puffed up with vanity, interrupting Tanya Pliberseck on Q&A and then demanding she not interrupt his interruption, without seeing a continuation of the disunity that has bestowed these deadly sins on the rest of us.

Kevin Heiner Rudd has enough black on his name already, or have you forgotten. The lesson is disunity is death. Labor is certainly conflicted within itself. We won’t know if we are well represented until we see which way tony abbott will bounce. we have had chnges of government before not that many years ago. Edward James

If there was a by-election in Griffith the electorate would be handed to Liberal, Bill Glasson, who ran a strong campaign. There’s now a small ALP margin of less than 4%.

Rudd is an effective member for Griffith: energetic, engaged, highly visible in the electorate. Even if he hadn’t been Prime Minister, voters in Griffith could always name their federal MP due to his newsletters and personal appearances. How many others in the House of Reps could boast that…

Jeez, these guys (so far it is the males – thanks for sense, Tanya) are giving us a good look at tribal spleen. The Liberals have it too, but manage to swallow it with their tea. Who would want to wrangle (sorry, manage) this ALP mob? Maybe there should be a camping weekend in Bathurst or Lithgow where those-who-will-not-shut-up could be given instructions to search out the Light on the Hill, and not to come back unless they find it.

Bill Glasson has much more to offer Griffith constituents than that retread Kevin heiner Rudd. The people who “wrangle” the allsorted political mobs have voted. Some of us like me won’t be happy with the numbers of Labor politicians who were voted back in. Edward James