All charity roads lead to World Vision. Why?

Australians are giving much more money to charity -- and World Vision is reaping the cash. Sydney-based freelance reporter Dylan Barber asks why the Christian charity has a stranglehold on the market.

Australians are donating twice as much to charities which fund overseas development as they were in 2000 — and the lion’s share is going to World Vision, the Christian-based giant in the market.

The new government is cutting aid to pay for roads — Prime Minister-elect Tony Abbott has promised to cut $4.5 billion from the aid spend, and the Coalition’s official policy declares: “We are concerned about the rapid increase in foreign aid.”

However, it’s a different story when it’s people making the donations. Research published recently by the Development Policy Centre at the Australian National University found donations to those non-government charity organisations that tackle poverty reduction, humanitarian emergencies and disaster relief in the developing world are up. Annual donations are sitting pretty at $896 million, or about $40 per person.

Not only have donations doubled since 2000, but the growth rate of donations is more than twice that of the government’s Official Development Assistance, and four times higher than that of our Gross National Income. The ANU’s results are plotted below: 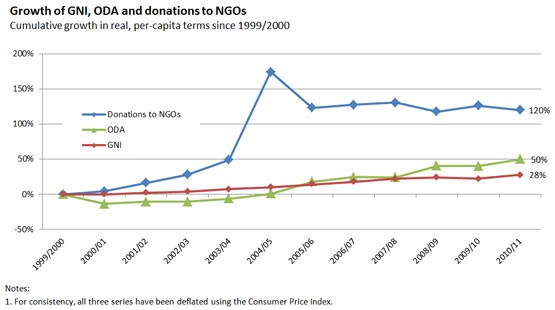 World Vision Australia has a stranglehold on the market, consistently receiving between 30% to 40% of all money donated between 2000 and 2010, at times nearly equal to the total share of the next 14 largest NGOs combined.

According to Matthew Clarke, head of humanities and social sciences at Deakin University, World Vision’s success comes down to two key factors; the effective use of child sponsorship programs, and name recognition in the marketplace.

“World Vision have a reputation for good development work that utilises funds effectively and efficiently, so because of that brand recognition people will often support them through child sponsorship or respond to direct appeals that they launch,” he told Crikey.

Critics of World Vision Australia point out that in 2012 the organisation spent 11.5% (nearly $40 million) of its expenditure on advertising and marketing.

“We recognise that for many Australians the amount that gets spent on fundraising is a big issue. We have to be very transparent and upfront about what we’re investing in Australia to be able to attract the resources that we need to support the work we do overseas,” said the charity’s general manager of sales and marketing Matt Davis.

Child sponsorship NGOs make up 46% of the charity sector, with ChildFund, Compassion and Plan each accounting for between 4%-7% of donations. However, established NGOs are now competing with a wave of newer organisations, as well as multinational NGOs like Save the Children, Oxfam and Doctors Without Borders (commanding around 4%, 5% and 6% of donations respectively), which have expanded in Australia. 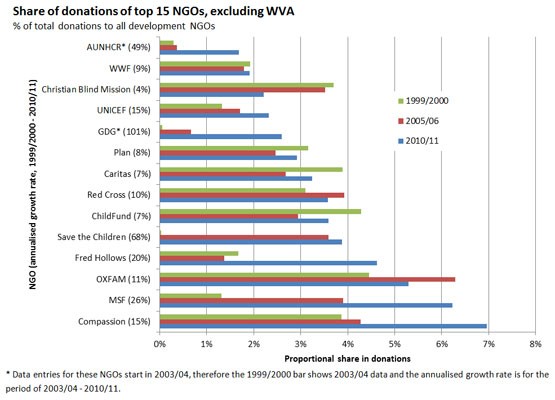 Although it currently has its lowest market share since 2000, World Vision Australia continues to occupy a unique position in the Australian psyche, according to Davis. “World Vision really pioneered in the television space in the 1980s when no other charities were engaging, and that’s when we really put poverty as an issue on the map.”

But even with World Vision’s name recognition, it is difficult to get Australians to donate to help those in the developing world. According to World Vision’s research, Australians are starting to turn their attention inward to domestic issues like border security, refugees, environmental conservation and economic forecasting.

“Even though in real terms Australia’s living standards are better off now than under the government 10 years ago, and our relative wealth and people’s capacity to give to charity has increased, in fact, they feel worse off, and I think a lot of that is due to the public debate,” said Davis.

Clarke concurs, but points out that despite the doomsaying, Australians are becoming more generous with aid: “That message has been fairly constant for three years, but as the figures show, giving has actually continued to increase, so the rhetoric may not be matching the reality, particularly for people who are supporting NGOs.”

Twenty-odd years ago, I worked for Plan International, who at the time viewed World Vision with some disdain. A DVD of a German TV program was in circulation alleging that World Vision funds were held in interest-paying accounts for a year or so before being sent to the field and the accrued interest was used for other activities (e.g missionary work)of the parent churches. Later news indicated that processes had been changed and that all funds, however earned, did go to the fields. While today, I would not dream of denigrating the excellent work World Vision does, I do wonder whether there are processes in place to monitor the usage of money coming into the possession of charities run by organisations (such as churches) which also collect funds for their other activities.

I won’t donate to ANY charity which is religion based. Religion causes enough problems on this planet, without encouraging them.
Perhaps we could start an atheist charity fund??!! Might give some relief to the recipients of ‘god-bothering’ cr+p!

I’m one of those people who did Sponsor a child for a year or two in the ’90’s and then stopped because I got sick of being bombarded with mail from world vision asking for more money. I’ve been pressured and signed up to other things here and there but always end up withdrawing for the same reason.
I am also dubious about the charities who get people to sign up on the street but won’t tell you exactly how much goes to the backpacker hawking the charity and how much to the actual charity.
Quite frankly I don’t really trust most of them.

S/S – the usual split for the “charity” spruikers is a thrid to the street walker, a third to the organisation that supplies them and a third to the named “charity”. Then there are expenses, sundries and other costs.
The remainder goes to the ostensible purpose.
Rather as the priest answered when asked how “Peter’s Pence” got to the Great Flying Spaghetti Monster, “we throw the plate up into the air and what He wants he keeps and we get the rest”.

So no one minds if coke spends money marketing to sell more drinks. but if charities spend money on increasing there reach so they can do more over all good. then we all get upset. Seriously, people need to think! Which is better, a lot of almost nothing? or a little of a huge amount. it astounds me that the Australian public is so stupid and uneducated.