The ABC's Kerry O'Brien has signed off on his 10th and last election campaign in the hosting chair.

Election night: the ratings. More people watched the election coverage on Seven, Nine, Ten the ABC and SBS than watched the weekend sport. A total of 3.5 million watched the coverage. The ABC was tops, with 1.452 million people watching across the country on ABC1 and News 24 (which had its highest national audience of 468,000). Some 932,000 watched Nine nationally; 634,000 watched the ABC; 426,000 watched Ten (fewer than on News 24), and 59,000 watched SBS’s coverage, which started at 9.30pm when all the shouting was over. Sky News’ coverage topped out at 96,000 for one of the hours. It was easily beaten by the NRL and AFL on Fox Sports. — Glenn Dyer

End of an era: Kerry says goodbye. This was the last election with veteran ABC journo Kerry O’Brien in the anchor chair. O’Brien started as a cadet journalist in 1966, and this was his 10th election at the ABC. Aunty polling boffin Antony Green wished him well: 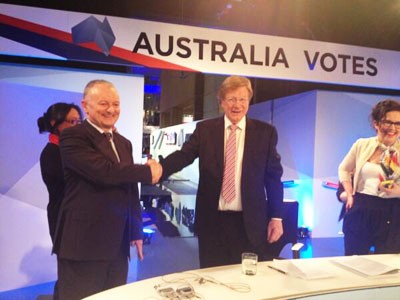 And O’Brien said good night for the last time. 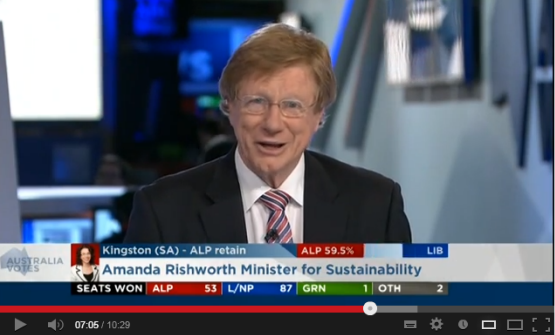 Just when you thought it was safe to watch Nine. The networks bring out their flashiest graphics for election coverage. While O’Brien on the ABC promised (and delivered) “no holograms”, Channel Nine loved its holograms. It had a virtual shark pool, and MPs who lost their seats were dropped into the pool to be devoured by computer-generated sharks … 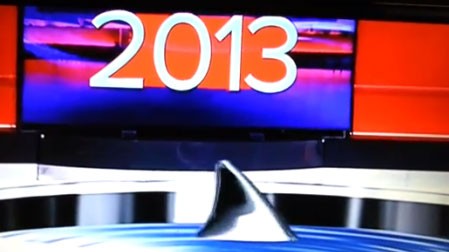 Parties splash their cash. The Liberal Party’s Saturday night victory did not come cheap. According to media and marketing monitoring company Ebiquity, the Liberals outspent the ALP by 67%, spending $6.75 million on election advertising, compared with Labor’s $4.04 million. And if you thought Clive Palmer’s advertising seemed to be everywhere during the campaign, you’d be right: the Palmer United Party was the third biggest spender, splashing out $3.02 million.

The lost art of speechwriting. When I meet with Martin McKenzie-Murray, a former speechwriter for a federal department during the Rudd government’s first time in office, his frustration with the structure and culture of Canberra speechwriting is palpable: “I was never the speechwriter there, I would say, because the culture of the place was the speechwriter. A million people would look at it, a million rival policy factions would look at it, they’d all want to inelegantly shoehorn their projects into it, and so everything read like a shopping list of expenditure and policies. It wasn’t a f-cking speech, it wasn’t an act of persuasion, it wasn’t an act of instruction, it was garbage.”

McKenzie-Murray’s award-winning site, Feeding the Chooks, invokes Joh Bjelke Petersen’s notorious view of news conferences and speaking to the press. But it alludes also to parts of  the 1946 Orwell essay “Politics and the English Language”, of which McKenzie-Murray says he thought constantly during his time with the government.

Is there anything he wrote while working for the Department that he was proud of? “If I did, they would’ve been abandoned or discarded. Anything that I might have been proud of would’ve fallen by the wayside, or been chewed up by the machine.” — Bethanie Blanchard (read the rest of this article at Liticism)

Stop the boats. The Coalition has long campaigned on a “stop the boats” platform, and that promise is set to be challenged now that Tony Abbott is in charge. The Herald Sun reported the first boat of asylum seekers under a Liberal government has been intercepted … 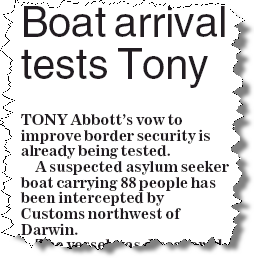 Will the Murdoch tabloid turn on its favoured leader and demand that he live up to his promises?

Front page of the day. The honourable member for Warringah is not looking very prime ministerial barefoot on the front page of The Daily Telegraph today, the first working day under a Liberal government. 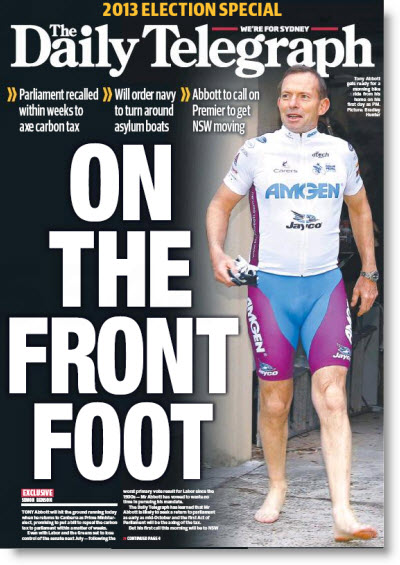 Picture of the new PM covered in brand names and business logos … seems about right.

I find pictures of Tony Abbott in his budgie smugglers and dressed as in this photo most distasteful. Nor would I have welcomed pictures of Julia Gillard dressed in, say, a bikini, although she had the good taste and discretion not to do so in public. Is it too much to hope that the media will publish less of these now he is Prime Minister?

The link to Kerry O’Brien’s sign off doesn’t appear to be working.

I mainly watched the ABC but did flick around to check out the other channels. Ch 9 seemed to have this huge panel of smug Liberals, Sky News just had Richo talking about all his mates and the ones he’s played golf with. You couldn’t possibly take any coverage seriously that had breakfast teams involved (7 & 9). Was left to good old Auntie to do the right thing, with Annabel Crabb an excellent addition, particularly in the interviews.