Legends of Queensland: Tony, Kevin, Clive and the fake election

The election perspective in Queensland was very different to elsewhere, especially for Labor. 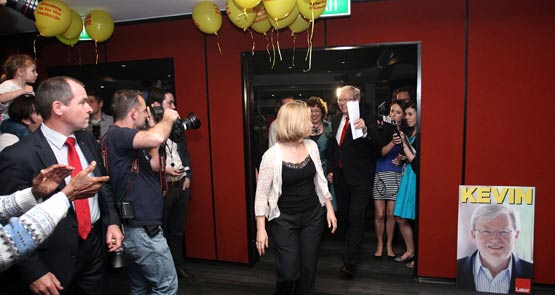 Near where I’m staying in Brisbane’s Southbank, there’s a fake beach, right next to the river. It has sand and water — one side shallow, one side deep — and sunbathers and crying children and seagulls, and there are even lifesavers, kitted out in standard lifesaver outfits, standing watchfully nearby. You can sit on the sand and, if you lie at the right angle, see the artificial beach water and behind it the river and kinda think you’re in a natural setting. But you’re not. It’s like Dave Bowman’s hotel room in 2001 or the village/town/pub in any number of TV shows that have created a simulacrum of reality composed of, usually, TV tropes. Indeed, there’s actually an official TV Trope named after it.

Wandering through it yesterday morning, I felt like planting among the “Lifeguard on duty” and “We’re Proud Of The Quality Of Our Water — Here Are A Few Tips To Keep It Clean” signs one reading “Caution — Labored Metaphor”, after an election with all the appearance and paraphernalia of a genuine contest, right down to the AEC lifeguards lurking about, but that in fact was an exercise in furious agreement between the major parties on the economy, education, asylum seekers, health and even the notionally contested areas of broadband and industrial relations.

Better yet, Queenslanders flocked to the standard of a man who claimed to be different, an outsider who was ready to shake politics up. But Clive Palmer, in that sense, is a complete fake: he is a businessman who spent years and considerable money trying to buy influence via the conservative parties in Queensland, until he permanently fell out with them. At that point, he merely cut to the chase and funded his own party to pursue his interests.  Clive Palmer, longtime National, former Bjelke-Petersen adviser, the man who bankrolled the establishment of the LNP, is less of an outsider than many of the conservative backbenchers he’ll sit near in Canberra — assuming he bothers to show up.

Saturday night, I walk the two kilometres from Southbank down to the “Legends” room at the Gabba, which sounds like the nightclub at the Maroubra Seals Club I might have gone to when I was 17. That’s where the Rudd event is being held. I’ve never been to the Gabba, so I wander aimlessly about with some other lost souls until I spot an OB van and head towards it, then follow the wiring upstairs. I thus came in the back way, so to speak, which fortunately appears to be of no interest to an avuncular security guard behind the stage. It’s still early and the polls have barely closed, but Stephen Smith’s already conceding on the ABC on the giant screen in “Legends”; it’s not too long before, with about three votes counted, Antony Green’s getting ready to agree with him.

Over at the bar, there’s a tab courtesy of the ALP, which lasts approximately 30 seconds (I’m not exaggerating), but finger food is arriving. The food — forgive me for dwelling on this — is slow at first, causing long queues of hungry ALP members and hacks — but eventually the sausage rolls and party pies pile up, too many to consume even for the crowd inside “Legends”. There’s a metaphor there, too, but I’m too busy scoffing sausage rolls and tweeting about “honest working man’s food” to work on it.

“Outside Queensland and western Sydney, though, it’s a wipeout. Tasmania’s a bloodbath. It’s all over before anyone’s even drunk.”

And the mood in the room is unexpectedly buoyant. As the results flow in and it becomes apparent Labor is holding the line in Queensland, cheers go up. Wayne Swan’s holding — cheers. Yvette D’Ath (at that stage) is holding — cheers. Peter Freeleagus is doing well in the seat vacated by Kirsten Livermore — cheers. News on high-profile figures elsewhere is also good. Chris Bowen is holding in Sydney — big cheers. Mike Kelly pulls ahead in Eden-Monaro (Peter Hendy later chases him down) — cheers.

And when Kevin Rudd is shown holding in Griffith, the room goes off. I scoff another party pie in vindication. I’ve been mocking the Rudd-will-lose claims for weeks and promised to get my gear off on Sky if he succumbs, so a crash gym program no longer looks necessary.

Outside Queensland and western Sydney, though, it’s a wipeout. Tasmania’s a bloodbath. It’s all over before anyone’s even drunk. The Labor attendees are seizing on whatever glimmers of good news they can find. Michelle Rowland getting a swing against the wretched Jaymes Diaz sends them wild. But I’m watching the AEC results and keep refreshing the Queensland page in amazement. Palmer’s party, which the polls suggested was getting around 8%, is over 12%. They’re counting votes quicker in Queensland than elsewhere — 2%. 5%. 10%. 19%. Palmer’s still getting over 12%. Later it comes down to around 11%, but it’s an astonishing result.

And then, mid-evening, the ABC puts up Fairfax, and in the gap between the candidate votes tallies and the projection, there’s a weird silence. It projects a Palmer victory, and the room erupts in astonished laughter. Palmer was the enemy once, but now he’s the enemy’s enemy. Moreover, it becomes clear that, to the extent he has taken votes from Labor candidates, they’re flowing back via preferences.

A new political party is born before our very eyes, a plutocrat’s party designed to be a vehicle for one man’s will.No wonder News Corporation, which once cheered for him, now hates him. Rupert Murdoch spent a lifetime building up political influence via his media outlets. Palmer has bought himself straight into politics in a matter of months. No wonder Chris Mitchell has sicced Hedley “Lamarr” Thomas onto him in a desperate bid to unearth such astonishing facts as that Palmer isn’t really a professor. But the reaction seems to have been, even among The Australian’s Sunshine Coast retiree readership, that if Rupert hates him so much there must be something OK about him.

As Palmer emerges in Queensland, the Greens are going backwards everywhere. They’ve copped a 3+% swing in the House of Reps and a 4.4% swing in the Senate. However, like a well-established party, they’ve managed to hold onto what they’ve got despite the tide going out: Adam Bandt holds in Melbourne, to labour in latte-sipping obscurity for the next three years; they pick up another spot in Victoria, which was always expected, and look to have held on in South Australia and even WA.

But they’ve lost the balance of power, not through their own fault but Labor’s, because those lost votes aren’t flowing back to Labor in the Senate, they’re spraying like a fire hose all over the place and electing any number of minor party candidates. This will give Prime Minister-elect Tony Abbott the chance to negotiate the passage of legislation through the Senate, albeit at what policy cost will be seen and much-analysed after July 1.

Still, should Christine Milne keep leading after a collapse in the Greens vote? Only the lack of an alternative leader makes the answer obvious.

Back at the Gabba, Kevin Rudd finally appears, hours after it’s obvious his government is history. The room goes wild, etc. Rudd is upbeat and declares that Labor has remained a viable fighting force and the line has been held in Queensland. Cheers. In fact, screams. A woman near me screams at everything the soon-to-be ex-Prime Minister says. And she’s producing a frequency that’s causing sympathetic resonance in some part of my brain. I start to develop a monster headache, either that or I’m having a pastry overdose. I’m dying for Rudd to get off stage so I can go and sit down but he keeps talking, thanking people, something about the burghers of Griffith. In my increasingly agonised state I wonder why he had burgers when all I got was party pies and sausage rolls.

He seems to be declaring mission accomplished — the mission being to stave off a catastrophic defeat. More cheers, more screaming as he leaves. He has a point, especially in Queensland and western Sydney. The catastrophe has indeed been geographically confined, partly due to Rudd taking over as PM, party due to the NSW Liberal Party’s capacity to f-ck up everything it touches, especially in western Sydney, the future heartland of the Liberals that appears unwilling to accept the party’s view that it can serve up any dropkick — or in Jaymes Diaz’s case, long-range-from-inside-your-own-half-in-the-final-10-seconds-to-win-the-World-Cup field goal — and win.

The NSW Liberals stuffed this up last time and cost Abbott government. They haven’t done that this time, but someone in the Liberal hierarchy has to sort this out, especially in western Sydney, where shallow branch membership and intra-factional games have served up some absolute rubbish to voters.

To my relief, Abbott appears on the screen in Legends. I and about three others are watching him. I miss the bit where some “activist” appeared on stage and pumped his hand before being crash-tackled off it. Only in Australia, etc, etc, but for god’s sake what if he was someone who meant to do real harm? As it turns out, that’s the only excitement on offer. Abbott’s speech, like Rudd’s in 2007, is plain uninspiring: short (as is Abbott’s wont), cliched and a rehash of his slogans. Australia is “open for business”, he declares, which presumably comes as a surprise to foreign investors who’ve tipped record amounts of money into the economy over the last six years, so much so that the Nats want to limit it. Still, winners are grinners, etc.

I escape into the night, desperate to clear my head. I wander along Vulture Street until I’ve vaguely back at Southbank. Then a sort of portal opens up, a vaguely Proustian moment in perhaps the world’s least Proustian city: a softly lit, budding grove that appears invitingly before me. It’s the South Bank Grand Arbour, which winds along the river. I happily enter. The night is deliciously warm and the walk beneath the bougainvillea is relaxing and head-clearing. Life goes on, and the simple pleasures remain.

Thanx for recalling many good memories of the walk thru Southbank and to the Gabba, but in my case to catch the footy or the cricket.

Enjoyed one of your sessions at Brisbane Writers Festival, Bernard.

Perhaps Palmer has taken a tip from Berlusconi ie: it’s better fun and more effective to BE a politician than to buy one.

That screamer during the Rudd speech was practically unbearable on TV – can’t imagine the tinnitus that’d serve up if you were stuck next to it, Bernard.

BK; “Still, should Christine Milne keep leading after a collapse in the Greens vote? Only the lack of an alternative leader makes the answer obvious.”

Aye,ya,yae. Leader of what? A dozen Senators who effectively vote their own conscience and a single MHR who’s only objective for the next term will be to pander to his own constituency.
The Greens don’t even need a “leader”. Brown only became leader because the press kept refering to him as such.
But you guys love a leadership stoush so much, you just can’t leave it alone.

I kept having to scroll back up to confirm that I wasn’t reading Guy Rundle. Is Bernard channelling?