No time for Abbott to hover with the knife

It’s a prudent time, economically and politically, to implement spending cuts. Moving swiftly will give the budget more freedom and help to limit interest rate rises. 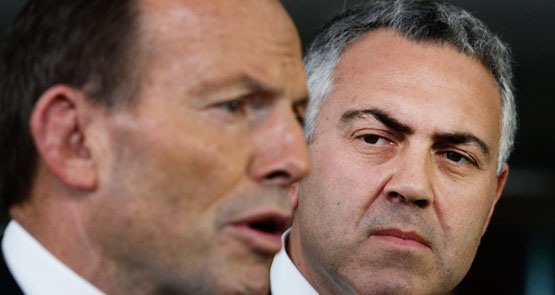 If Tony Abbott wants to kick off his prime ministership on a strong note, he and Treasurer Joe Hockey should have an economic statement or mini-budget, if you like, sometime before year-end.

While the current fiscal settings and glide path on the return to budget surplus are well set, a quick implementation of some cuts in government spending in the right areas will work to shore up Australia’s triple-A fiscal position and give some fiscal freedom, if needed, some time down the track. Provided those cuts are not recycled into spending elsewhere, the trajectory to surplus will be a little more assured.

It is always hard to work out how big any cuts in government spending should be when the budget is already in good triple-A shape, but something in the order of 0.25% to 0.5% of GDP would be a good start. For reference, the previous government reduced spending by a thumping 1.5% of GDP from the global financial crisis stimulus peak in 2009-10 over the average of the next three years.

In dollar terms, cuts of somewhere between $4 billion and $8 billion a year should be doable. Spending cuts and some fiscal tightening should include measures that raise revenue for the government by reversing some of the plethora of tax breaks to individuals and private sector firms. There is plenty of leeway in fiscal policy to encourage market forces in the economy by removing or at least scaling back these market distorting tax breaks.

Going early on the cuts — that is, before year-end rather than waiting until the budget in May — has a couple of things going for it. It gets the money into the government coffers sooner rather than later and with the economy looking set to register a strong lift in 2014, the business cycle suggests it is about the right time to do it.

Politically, any trimming in government spending will help to limit the interest rate rises that are starting to be priced into financial markets in the next couple of years, in a similar way that the tightening in fiscal policy from 2009-10 has given room to the Reserve Bank to trim interest rates over the last two years.

What is also important politically is the goldfish-like memory of the electorate on government spending cuts — a range of measures taken in the next few months will probably not be remembered by voters at the next election. If the recent political experience is any guide, voters are ignorant or unaware of most tax changes and economic performance other than in a very general way.

Abbott knows budget management is an ongoing issue. Several times each year, changes will need to be made as priorities change or new issues emerge that the government needs to address. The scheduled budget day is eight long months away in May 2014. That is almost a quarter of the way through Abbott’s three-year term and clearly way too late to start changing some policy settings.

An economic statement would also outline a platform for the budget which would be calculated on the basis of the Coalition’s policy agenda. While the Pre-Election Fiscal Outlook document presented a true and accurate reflection the outlook for the surplus and government debt, Treasury will obviously need to rebase those numbers to fit with the Coalition’s policies, including on the paid parental leave scheme, Direct Action on climate change, cuts to foreign aid, the revisions to the national broadband network and the infrastructure spending. It will also show the loss in revenue from abolishing the carbon price and mining tax.

The economic statement would be a basis for Abbott to highlight the budget structure under his plans, an outline on the return to surplus and the profile for government debt over the medium term. It would be a starting point from which the recommendations from his commission of audit could be benchmarked in a big-picture way.

Preparing an economic statement early on would also present an opportunity to repair the relationship between Treasury and Joe Hockey and Andrew Robb, who unfairly slagged its competence when in opposition.

If the Coalition is to be in government for a couple of terms, it will need to work closely with Treasury over that time and understand the intricacies of how the budget numbers swing for no other reason than unexpected variability in factors that are outside the control of Australian policy makers.

I look forward to seeing some form of economic statement some time in December and for it to set the framework for fiscal settings for the Abbott government.

If the Coalition is going to be in for a couple of terms don’t wait to cut, BONE THE TONE!
The Worst Prime Minister and The Worst Government in Australia’s History!!
“Look, It Just Is!”
See what we’ve learned in the last four years.
Hyperbole Rules!
We Want Malcolm!!

“It is always hard to work out how big any cuts in government spending should be when the budget is already in good triple-A shape,” But obviously it must be done, otherwise we might end up with something crazy like a well funded approach to climate change, or a school system that isn’t a national disgrace.

@2
Not to mention, “See, first boat in yesterday. Obviously their refugee policy isn’t working either!”

Australia is once again open for business.

Given that the ALP was essentially a 1 term government, lefty’s can’t blame the media for their ousting.

Good riddance Rudd, the worst PM in our short history.

Cutting now would be bad for the economy. Far from getting us on track for a surplus, they’d weaken the economy and push a surplus further away (as happened under Gillard and Swan).

The claim about fiscal freedom is totally false because we own the Reserve Bank. Ever since the dollar was floated we have had total fiscal freedom, and we always will.