Is this your new PUP balance-of-power Senate warrior?

Jacqui Lambie, a Tasmanian Senate candidate for PUP, looks likely to win a seat and co-hold the balance of power. So who is she?

A Palmer United Party candidate who seems likely to co-hold the balance of power in the Senate wants a return to national military service, looks to a “higher power” for policy guidance and has been described as “Steve Fielding without the stunts”.

With 78% of the vote counted, the PUP has won 6.9% of the Senate vote in Tasmania (0.48 of a quota). Candidate Jacqui Lambie is a good chance to win the state’s sixth Senate seat, which would put her in the balance of power along with a motley crew of microparties. The result may not be known for two weeks.

It’s understood Lambie told SurgFM this morning that if Clive Palmer didn’t win Fairfax, she would run for leadership of the PUP. Before the election she declared she would be the “special minister for Tasmania” if she won.

So who is Jacqui Lambie? Based in Tasmania’s conservative north-west, she first tried the ALP and the Liberals before turning to the PUP because she needed money to campaign. “To be honest I was running out of money,” she told AAP about her conversion to Clive. “I just didn’t have the money like the big players did for advertising.”

Lambie used to volunteer for ALP senator Nick Sherry; some Labor insiders say there was talk that she may have been considering joining the party and forging a political career. However she left Sherry’s office in difficult circumstances and turned to the Liberals, joining the party and seeking federal preselection for the seat of Braddon (she failed).

One Tasmanian political insider described Lambie to Crikey as “Steve Fielding without the stunts” (a reference to the former Family First senator), while a senior member of a major party in the state said: “She would probably fit the Clive [Palmer] mould.”

Lambie is a former soldier who was injured and became a passionate campaigner for veterans. She works as the “membership ambassador” for the Burnie Chamber of Commerce and Industry, and is involved in the RSL and Rotary. She has organised north-west Tasmanian blue light discos for youngsters. In terms of her political views, Lambie has said:

“Maybe it is time we placed national service back on the agenda but reconfigured to suit today’s conditions … It’s time to teach [our youth] some respect, loyalty and honour.”

She is fiercely anti-Green. “What we will not abide by is a toxic economic dictatorship led by a minority,” she wrote in a letter to the editor of the Burnie Advocate, criticising environmentalists who were opposing a proposed Tasmanian mine. In another letter, this one taking aim at a Tarkine forest campaigner, she wrote: “We have had enough of people like you trying to shut down our livelihoods and drive our children out of Tasmania.”

“Mothers have worked and never received maternity pay for years — we made it through, and so have our children. As mothers we are proud of that. I am sure there are many mothers like myself who would do it all again, for free.” 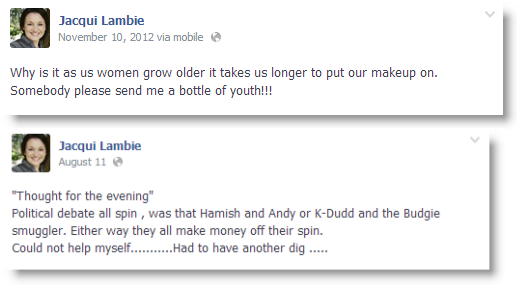 Tasmanian political insiders were surprised at the PUP’s relatively strong poll result in the state, saying a cashed-up advertising campaign had helped. It’s believed some Labor-leaning voters may have cast their ballots for the PUP as a protest vote. Crikey called Lambie and emailed her questions, but has not heard back yet.

She is fiercely anti-Green.

What irony that surplus Green preferences are likely to prove crucial in getting her over the line over the Liberal Democrats or a third Liberal.

It’s amazing what 30 pieces of silver can buy ewe nowadays?

Lambie has spoken to ABC. Among other things, she said this:

“I think he’s got a very big ego and I imagine after my 10 in years in the Army, Tony Abbott and I will clash quite a bit.”

Tasmania (and us benders) sold a PUP I suspect.