The votes have been cast, so we put our pre-election pollsters to the test. Who got it right, who got it wrong -- and which methodologies seem to have yielded the most accurate results?

Following an election campaign dominated as much by debate about polling methodologies as policy, traditional fixed-line phone pollster Galaxy, robo-poll upstart ReachTel and mongrel Roy Morgan Research are shaping up as this election’s most accurate pollsters.

At a national level, most of the big pollsters appear to have performed well, regardless of methodology. But individual seat polls showing a wipeout for Labor in western Sydney and Queensland — including the loss of Kevin Rudd’s seat of Griffith — did not eventuate.

Despite Bob Ellis’ bleatings about ownership bias and skewed methodologies, Newspoll came close to nailing the result — as did traditional rival Nielsen. The wooden spoon for accuracy goes to robo-pollster Lonergan Research whose mobile-only results, published in The Guardian, predicted an election night nailbiter. 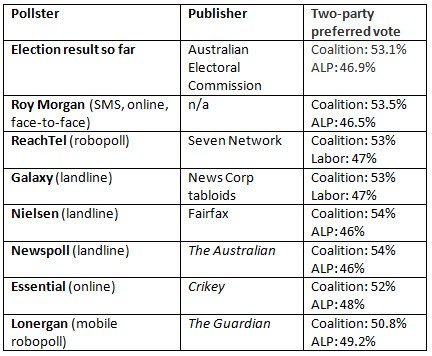 On the day before the election, a Galaxy phone poll of 1503 voters, weighted to reflect the Australian population, found a two-party preferred results of 53% to the Coalition and 47% for Labor. A ReachTel poll for Channel Seven, based on an automated telephone survey of 3500 voters, produced the same result. As for the actual result, the Australian Electoral Commission shows the Coalition sitting on 53.1% of the 2PP results, with the ALP on 46.9% with 76% of the vote counted.

Roy Morgan — which polled 4937 respondents by SMS, online and live interview — may not have a media partner, but performed strongly with its pre-election poll showing the Coalition on 53.5% and Labor on 46.5%. Morgan breaks its results down to one percentage point, unlike other pollsters.

On election day, both Newspoll (published in The Australian) and Nielsen (Fairfax papers) had the Coalition on 54% and Labor on 46%. Like Galaxy, these results were based on fixed-line telephone interviews (i.e. with real people, rather than robots, asking the questions).

Online pollster Essential Media Communications, published in Crikey, showed the Coalition on 52% and Labor on 48% the day before election day. A mobile-only poll by Lonergan Research, published in The Guardian on Friday, put the Coalition on 50.8% and Labor on 49.2%. Lonergan Research chief executive Chris Lonergan commented on the results last week by saying:

“We know a growing proportion of Australians do not have a landline at all, and many more Australians rarely or never answer a landline call — yet almost all Australians carry a mobile phone. We believe that a mobile-only poll is the most accurate means of measuring the views of Australians in 2013.”

Chris Lonergan today acknowledged his statement was not borne out by the results on election night and his methodology may require tweaking. “From a theoretical point of view, mobile polling should be the most accurate methodology, but we need more data to see how to proceed,” he told Crikey. “We’re not ready to write it off yet.”

Lonergan had earlier shown Rudd trailing LNP candidate Bill Glasson 52-48 in his seat of Griffith. Despite a swing against him, Rudd was returned with 53% of the two-party preferred vote.

This was only one among many eye-catching individual seat polls whose results were not replicated on election night. A Fairfax ReachTel poll in August showed treasurer Chris Bowen behind by 47-53% in his safe seat of McMahon and Matt Thistlethwhaite lagging 48% to 52% in Kingsford Smith. Both were re-elected on Saturday.

It also appears Labor will lose only one seat (Petrie) in Queensland, despite a Tuesday Newspoll showing Labor on track to lose up to five seats in that state.

“Some of the polls in individual electorates were completely wrong and could not be reconciled with the national polls,” Antony Green said. “What was wrong with much of the polling is that people say swings are never uniform and therefore you have to poll electorates. But the swing was uniform — except in Greenway and we all know why that was.”

Green says publishers should save the money they spend on individual seat polls and spend it on state-based polls. “This country is crying out for someone to commission state-level polling.”

Saturday night’s results also suggest journalists should be wary about leaked internal party polling. The Daily Telegraph splashed with a story on Saturday showing Labor on track to lose Gough Whitlam’s former seat of Werriwa, but the ALP’s Laurie Ferguson retained the seat with 53% of the vote.

A process for finding information is a *method*. Methodology is the study of methods.

Anthony Green says “This country is crying out for someone to commission state-level polling.” Surely the one thing we can all agree upon is less polling – it would surely be much healthier for our democracy if our news focused less on polls and personality and more on policy. It would also be a great personal relief if we could go a few days without Dennis Shanahan and others “re-interpreting” the most recent Newspoll results (and fantasy head to heads) to put a pro-Liberal spin on the result.

All that verbiage – for the sake of having something to say or write?
The same “experts” will be relied on again no doubt? Why would you sack such under-achievers…?
They’re like economists aren’t they – how many of them saw the GFC coming – but they keep being feted as “experts”?

You’re being too lenient on Mackerras. Here are a few things he wrote in Saturday’s paper:

Perhaps most astounding from an experienced psephologist is: “but today I concentrate on the Senate where, due to the proportional representation system, prediction is quite easy.”

–South Australia will see the defeat of Greens senator Sarah Hanson-Young and her replacement by the third Liberal candidate, Cathie Webb.

–In Tasmania .. Labor will lose its third senator (Lin Thorp) to the Liberal candidate Sally Chandler.

–In Queensland, “…will be James Blunden from Katter’s Australia Party.”

–“In Western Australia … today’s result will be the same as it has always is, three Liberal, two Labor and one for the Greens, the incumbent Scott Ludlum.”

–In Victoria, Mackerras got it partly right: “The new Greens senator will be Janet Rice”.

–In NSW, Mackerras prediction is still in the running: “The new Greens senator will be Cate Faehrmann.”

“Morgan breaks its results down to one percentage point, unlike other pollsters.”

Morgan actually rounds to the nearest half a percent rather than the nearest whole. It does not break down to .7, .8 etc.

ReachTEL breaks down its published primary to one decimal but rounds the 2PP to whole numbers. The published primary can be used to calculate the actual 2PP, which was about 52.7, following 52.4 and then 53.4 on the two previous days.