Tony Abbott walked out on stage last night as our next prime minister. But did he step up from the ruthlessly effective opposition leader we've come to know over the last four years? 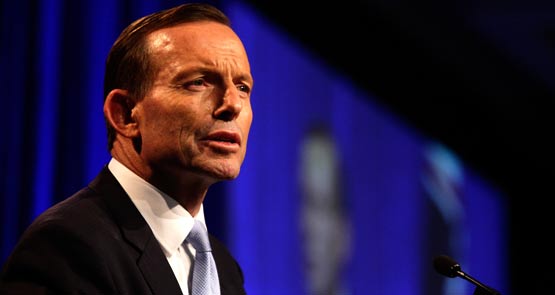 Tony Abbott: boxer, former trainee Catholic priest, brutally effective Opposition Leader. But can he step up to be prime minister?

After almost four years of nipping at the heels of a crumbling Labor regime, four long years in campaign mode, Abbott walked onto the stage at Sydney’s posh Four Seasons Hotel last night to assume the mantle of Prime Minister-elect.

To the amped-up throng of almost 1000 party faithful chanting “Tony, Tony”, Abbott delivered a speech in familiar Opposition Leader-mode. He revelled in Kevin Rudd’s defeat, took aim at Labor’s policies, and made some limited, well-worn promises. Australia’s next PM did not try the “vision thing”. He did not inspire so much as gloat, thank and reward.

“The Coalition has won 13 seats clearly, with 10 seats still in play, and I can inform you that the Australian Labor Party’s vote is at the lowest level in more than 100 years.”

“Today the people of Australia have declared that the right to govern this country does not belong to Mr Rudd, or to me, or to his party, or to ours, but it belongs to you, the people of Australia. You will punish anyone who takes you for granted, and that’s as it should be in a great democracy such as ours … “

“Punishment” was an interesting choice of word from Abbott — something to be expected from the pugilist and the priest, but perhaps not the prime minister.

As far as Abbott’s vision went, it was this: to remove some Labor policies, build roads, and return the budget to surplus at an unspecified point (not during the coming term of Parliament).

“In three years time the carbon tax will be gone, the boats will be stopped, the budget will be on track for a believable surplus and the roads of the 21st century will finally be well underway,” Abbott told the chanting crowd — which included former leader John Howard — in the riotous blue-hued room.

There hasn’t been a good election-night victory speech for a while, of course. In 2010 no one had won, and in 2007 came the first signs that Kevin07 might not have been everything he was cracked up to be — a curiously flat and uninspiring speech, trumped by Howard’s superior concession speech.

Last night, Abbott set out the tests by which he thinks his government should be judged a success or a failure. On policy, as noted above, he pledged to remove the carbon tax and stop the boats this term, and return to surplus later on. On managerial skills, he said this:

“I now look forward to forming a government that is competent, that is trustworthy, and that … steadfastly sets about delivering its commitment to the Australian people.”

Towards the end of the speech, Abbott said: “The time for campaigning has passed, the time for governing has arrived.”

Whether he finds it as easy to be prime minister as he did opposition leader remains to be seen.

Abbott has campaigned heavily with his family over the last five weeks. His three daughters and wife Margie have been rolled out throughout the campaign, done interviews with sympathetic newspapers, spoken at press conferences. Last night they were banished from the stage; Abbott walked on alone and spoke alone while his family applauded from the jostling crowd. This is unusual. In recent political history, winners (and losers) have been flanked by family members, some singing the national anthem joyously for the cameras, some weeping.

After Abbott spoke his family joined him on stage for photos. His daughters were clad entirely in white, with space-age touches to their outfits. It’s a pity they went to the effort of decking themselves out a la Robert Palmer back-up singers or Eurovision girl band only to miss out on TV history. Perhaps there will be much less of the Abbott family on public display now the votes have been cast.

Drama came when a young man invaded the stage for a photobomb; he spent about a minute with the Abbotts before being wrestled away by security. There was some confusion around whether he was a boyfriend of an Abbott junior (it seems he’s not).

It is dangerous for Abbott and Rudd to use their families as campaign fodder because there is little defence should they be attacked for some slip.

As I said somewhere else….I am underwhelmed by Tony Abbott’s overwhelming victory.

As usual it was a negative vote. People voting against Labor rather than for Tony Rabbott.

Gavin, I thought it was rather ‘gutless’ -not dangerous, but now that they are in the ‘personality spotlight’ I don’t disagree with your point. In my job, I cannot hide behind my adult daughters as Abbott did. Also, I cannot allow one of them to put pen to paper with regard to political life inherent in my job and of all the horrors that brings with it. It is my job, and therefore, my fight. Politicians need to learn this simple truth.

The problem with the Abbott girls, especially when they were paraded in white last night, is that they look just like the characters in The Virgin Suicides. Creepy.

I’m interested at the Pandora’s Box he’s pried open, to win like he did? The legitimisation of such a negative, nasty m.o.
What worked for him – and how many people who could have brought him to book in public let him go on – digging deeper.