On a bad night for lefties, Bandt’s Melbourne party was swinging

West Melbourne was the place to be for angry lefties last night -- there was at least one victory to celebrate. Crikey joined Adam Bandt and the Greens faithful. 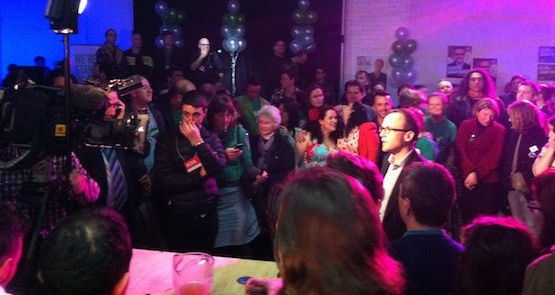 For self-styled inner-city lefties trying to find a sliver of joy on one of the darkest nights in Australian political history, the Greens’ shindig in West Melbourne was the place to park the fixie last night — not Trades Hall (2010) or the Imperial Hotel (2007) but the food van/cardigan mecca of the People’s Market.

By 8pm, Labor had all-but conceded, Antony Green had called it and a second term for Adam Bandt was in the bag despite a lack of Liberal preferences.

Inside, live cross after live cross of Bandt’s gleaming mug was beamed around the country, backed by some savvy DJing — one explosion of cheers segueing into a triumphant version of Daft Punk’s Get Lucky. But these days luck has almost nothing to do with it — the Greens’ party machine is a well-oiled network of hepped-up volunteers who had been in a frenzy for the last three years trying to keep their man in Canberra.

In his rambling concession speech 2000 kilometres away at the Gabba, Kevin Rudd may have been ranting that “Ben Chifley’s light on the hill will continue forever!”, but when Bandt trotted out his “new light on the hill — and it’s solar powered!” line mass reverie ensued.

The speech rolled on, some impressive base demagoguery spurring on cheers, one-time state Melbourne candidate Brian Walters talking up a Sophie Mirabella loss in Indi, while on a screen to the side Tony Abbott was silently claiming victory on Sky News. But no one gave a fig about the Liberals.

For the Greens in Melbourne this battle has gone beyond the issues and is now about ramming home an advantage against Labor’s Left flank, pure and simple. Tellingly, the biggest applause came when Bandt thanked the African community (there were translators roaming the room), which would’ve had former MP Lindsay Tanner turning in his political grave given the huge amount of resources Labor’s local machine had ploughed into cultivating and assisting the South Sudanese population.

When Rudd claimed that he was “proud to be an Australian”, the heckling erupted, with one reveller yelling out “not if you’re an asylum seeker!” to widespread head nodding.

“The anti-Labor jeers were coming as fast as the $40 dollar bottles of Yellow sparkling flying off the bar (retail price $6.99).”

The Greens play the game hard — volunteers had earlier donned Liberal blue shirts on the booths and circulated how-to-vote cards to encourage Docklands Tories to buck the Coalition’s official directive to go to Labor first. The anti-Labor jeers were coming as fast as the $40 dollar bottles of Yellow sparkling flying off the bar (retail price $6.99).

But for the broader Left, this would’ve had to be one of the grimmest results imaginable — the worst Labor vote in 100 years, a national collapse in the Greens vote, the likely loss of the Greens’ balance of power in the Senate and the loss of all Bandt influence in a Coalition-dominated lower house. Still, hope where you can find it.

Over at the Flemington-Kensington Bowls Club Cath Bowtell’s wake was in full swing, the gloomy mood buoyed by club president (and Mr Jen Kanis) Davydd Griffiths’ crucial decision over the last year to install much needed EFTPOS facilities.

There was some small consolation — Laura Smyth in La Trobe and Darren Cheeseman in Corangamite both came under the statewide swing despite going down the Channel Nine gurgler. But the Rudd rejection was on full display — his concession speech on the Labor projector had met with barely-concealed hostility.

Labor might one day be back in Melbourne, a seat it had held for most of last century. But deep in their hearts, the party knows Adam Bandt will be the local member now for as long as he wants it.

Is that right? Correct me if I’m wrong, but isn’t that against the law? If not – morally, how is fraud justified in the Greens mindset?

Russell, I’m a green and I can’t justify the blue shirt brigade. But it isn’t against the law. I was doing the rounds of the booths two elections back when reports started coming in of Lib volunteers wearing green t-shirts handing out green coloured liberal how to vote cards. The ‘volunteers’ were teenage girls recruited from a dancing school and were told they were handing out for the ‘environment party’. Apparently this was perfectly legal.

This doesn’t make it OK for us to do it though. Not happy.

Andrew, I’m struggling to understand how the ALP could even wildly be regarded as ‘left’ these days. It’s a very rigid concept that doesn’t fit with the contemporary political landscape however it would be more accurate to say that one conservative political party has been replaced by a more conservative party.
The Greens vote remains poor in Qld, perhaps the most conservative of Australian states but was also surprisingly poor in Tasmania showing that Tasmanian Greens have some work to do. The Green heartland seems to have clearly shifted to inner-Melbourne with the Greens winning Melbourne in their own right this election and moving closer to second place in the adjacent seats of Wills and Melbourne Ports, the two most likely to be the next to fall from the representation of the ALP whilst it becomes a me-too duopoly rival of the Coalition.

Was this really the worst Labor in 100 years?
I find it hard to believe – especially since Abbott said it in his victory tripegloat. If so, How is it that they have done so well, compared to ’96 and ’77?

The Greens reveal their intellectual immaturity by partying hard on a night that has revealed how inadequate their collective policies are. They have lost half of their vote. They are now back where they started—yuppy-organic-eating inner Melbourne—unfortunately that’s the place they will forever stay!