The pundits weigh in on the significance of Abbott's victory. Andrew Bolt and Piers Akerman, unsurprisingly, are over the moon. 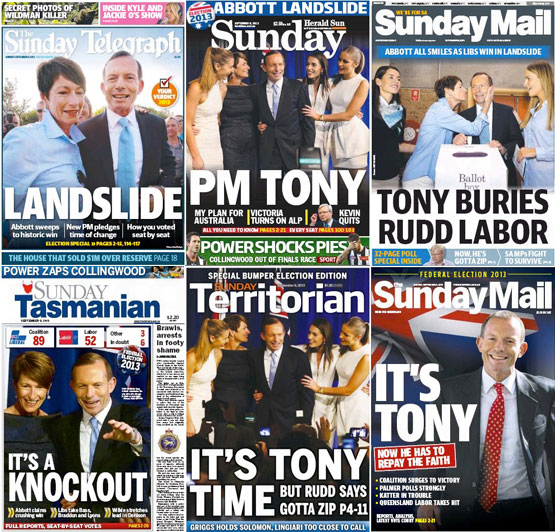 As the curtains came down on the Rudd-Gillard era last night, the press gallery scribes and the op-ed columnists were busy in the wings, bashing away on their keyboards, sizing up the moment, honing the first draft of history.

According to The Age‘s Michael Gordon, despite the swing against the government being smaller than expected, Kevin Rudd is less saviour than villain:

“The Kevin Rudd experiment has failed and failed comprehensively — and Labor now faces the colossal challenge of rebuilding and redefining and reconnecting, most likely under the leadership of Bill Shorten. Rudd insists he is not into ‘what-ifs’ but he and his party must surely reflect on the squandered opportunity of the last six years, and wonder how a talented government that pursued and implemented some landmark policies could succumb to such collective insanity and division.”

Over at The Conversation, however, Michelle Grattan is more forgiving:

“In assessing Kevin Rudd’s performance, it depends where you’re coming from. Rudd’s destabilisation over the last three years has contributed mightily to the perception of a fractured and disunited government. But his return to the leadership has significantly contained the swing against Labor — which under Julia Gillard was likely to be huge — to a relatively modest level.”

Also at The Convo, Shaun Carney warns Abbott will have to quickly change his style as prime minister:

“Vindication is his, but there is still the small matter of actually doing the job now that he has secured it. Abbott as an opposition leader was frenzied, intense, relentless, functionally incapable of pulling back and changing either his tone or his rhetoric. Now that they are in charge, Abbott and his likely treasurer Joe Hockey will have to transform their political approach instantaneously. The hysterics of the past few years will no longer be of use to them.”

No such concerns for the Herald Sun‘s Andrew Bolt. It’s his day to celebrate — and rub the Left’s face in it:

“Tony Abbott, written off as ‘unelectable’, has led the Coalition to one of its biggest wins. This is a victory over a cultural elite that mocked him and Labor, which vilified him as a ‘misogynist’ and bigot. It is particularly a victory over the green movement, which Abbott fought from the day he won the Opposition leadership four years ago … Labor bet its house on it, smearing Abbott as a woman-hating ‘thug’. Journalists fanned that deceitful stereotype. In fact, Abbott is seriously smart, literate and considerate, as well as ferociously disciplined and competitive. Voters saw that in the campaign.”

“Despite the relentless smear campaign which began from the moment he was elected Opposition Leader, Abbott comes to office without any skeletons rattling in his closet. He is neither a bully nor a thug, contrary to the baseless stories peddled by Labor lickspittles in the media pack. He is a man of values and principles, a family man with a loving wife and daughters, a man with mates across the spectrum, mates who may not parade themselves in the public eye for PR purposes but who know the special value of true friendship.”

Also at The Sunday Tele, union leader Paul Howes was stoic in defeat:

“There are so many things the Coalition will now have to support and implement that simply would never have happened if it were not for Labor. Does anyone seriously believe a National Disability Insurance Scheme would be coming in if not for Labor? And just as the electorate will punish a government for poor discipline, similarly they will grow tired very quickly of a small-minded Coalition, which fails to engage seriously with the big, long-term challenges we confront. Labor must remember this, keep calm and carry on.”

The Sun-Herald‘s Peter FitzSimons admits he was wrong to think Abbott was unelectable. Fitzy, too, is looking on the bright side:

“[I]t is possible — just possible — that Abbott will surprise us. If he can get to the prime ministership against all odds, in part on the back of the amazingly generous paid parental leave scheme — which runs entirely contrary to his entire policy drive before that — there has to be a chance that he will embrace other surprising policy U-turns.”

Meh. Abbott just had to not screw up and appear viable and let the bolt and his mates do the campaigning. The ALP delivered that result – the other guys just had to not do a mark latham or a john kerry.

He won with an electorate that believes that rudd crushes the hands of small children out of revenge, who punches walls when he doesn’t get his way, who’s a sociopath (just ask janet). The same electorate has been systematically convinced that the previous PM was a corrupt lawyer who assisted criminal enterprises and tried to hush it up. But the libs did win, and party discipline (with instant banishment otherwise) helped a lot.

Now for the fun part. While it’s still fresh, go and make copies of all the friendly coverage, and the promises, and the obliquely vague implications. Keep them in a folder somewhere, and revisit them in three years. The liberal campaign ran on an obvious foundation of “just say anything”. So, put away a little time capsule of what they said now, and you’ll get a wry chuckle from it before the next election.

The NBN will still be behind schedule and over budget, and contractors will still be moaning about having to compete – except that it’ll be fairfax reporting on it. We’ll still have a price on carbon, the national history curriculum will be unchanged, the NDIS will be underfunded, gonski reforms will be a shambles, boats will still be trying to get to Australia, and the odd one or two will still go off radar. The PPL as proposed will not happen, and assistance for the car industry will continue. The economy will continue its existing trends until china and the US pick up again, and joe hockey will take credit for that. Unemployment is going to increase in the meantime, and joe hockey will not take credit for that. National average house prices are going to fall, relative to inflation, joe will only take credit for that if the audience likes the idea and nobody’s around to report on it. There won’t be an internet filter, be it mandatory or opt-out, for exactly the same reasons that we don’t have one now. And they’ll screw up, like all first-term governments do, and ALP-voting public servants will continue to not leak against the new government in anything like the way that liberal-voting public servants leaked against the last one, so most people will never hear about the tantrums.

maybe the wrong place to ask, but does anyone know what’s happening with the Abbott/Etteridge court case- there is never anything in the msm

Interesting comment from Bolt that Abbott’s victory, ‘was particularly a victory over the green movement, which Abbott fought from the day he won the Opposition leadership’.
Well, let’s see how that claim stacks up with the policies that Abbott took into the election. Firstly, how did Abbott go in fighting the Greens, with their misguided view, (according to Bolt) that climate change is real and that we should implement policy to cut Australian emissions? Well, according to the words that came out of Abbott’s mouth, these are also his beliefs. Okay, so how about the Greens belief that the old school funding model was skewed to favour wealthy schools and should be reformed? Well, apparently that’s Tony’s policy too. How about no cuts to universities or the health system. Well, Tony has said over and over again, that there’ll be no cuts there. So, what about the Greens support for a NBN. Well, apparently Tony will still be building a NBN: well, sort of. Okay, so how about the Greens paid parental leave policy? Okay, so admittedly, Abbott’s policy is much more generous to the wealthy, but there is a great deal of similarity between the two policy positions. So what else is there? Well how about the Greens policy that refugees should be treated with compassion? Ah, finally a difference.
Though, Tony and his cronies, did vote with the Greens to block the Malaysian swap deal; on the grounds that he had a deep moral objection to sending refugees back to countries that hadn’t signed the UN Convention on Refugees. Of course, his words and actions since then, suggest that this justification may have been a bare faced lie.
Oh dear, what if Abbott’s other Green-like policy positions are also lies?
What does Andrew Bolt know?
And of course, if any of these relentlessly proclaimed policy positions turn out also to be lies, I so look forward to a couple of years of constantly vehement, rabid criticism of Abbott, from the likes of Bolt, Jones, Akerman, Devine, Albrechtsen, etc, etc.

P.S. Has anybody else noticed how Margie Abbott is almost a dead ringer for Tony Abbott?
‘Mirror, mirror on the wall, who is the fairest of th…..??? Oh, is that you, Margie?’

ELECTRIC LARDYLAND: Yeah, I noticed how similar they are when watching the Rabbott’s victory speech; their noses are particularly similar.

Was it my imagination or was The Rabbott’s decision to shove his family into the background for his moment of triumph was a cruel act. One directed against, a family that had supported him so thoroughly?

NB, it is a family of females, and we all know what he thinks of them.

Despite the gloating of the Andrew Bolt, Piers Ackerman and the tidal wave of Rupert Murdoch’s hired help. Minions, would be a better description.

I see the election vote as being a negative one. People voted against Labor, rather than voting for Tony Abbott.

Smear campaign? Everything that was reported was the idiocy coming out of Abbott’s mouth. Smear?? Seriously??