Disunity was death for a government with a strong record

Labor managed the economy well and achieved significant reforms, but ultimately simply couldn't govern itself. Voters were always going to punish them for it. 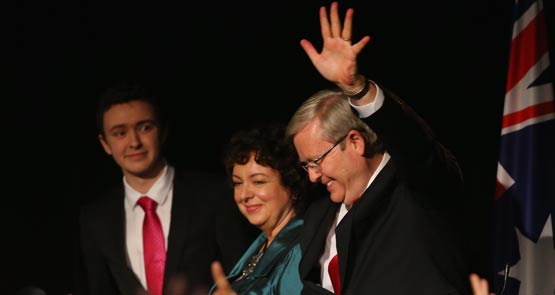 How did a second-term government that delivered some of the best economic management in the world and established major reforms in education and health so popular its opponents were forced to agree to them, manage to lose an election?

The standard answer, not incorrect, is that Labor has struggled to communicate its message on the economy. It never owned its economic success; indeed, many voters didn’t even think the economy had been managed well, even as Europe plunged into depression and the International Monetary Fund routinely downgraded its global economic forecasts.

But Labor’s problems were deeper than its lack of effective communication skills, the sort of problem that could be addressed (indeed, partly was, with the arrival of John McTernan) by hiring the right talent.

Labor managed the economy well, but it could never manage itself. In particular, it couldn’t manage Kevin Rudd, first when he was prime minister, when it took an unprecedented removal of a first-term PM to deal with his managerial style, and then when he was on the backbench, plotting his return. As one state Labor figure put it, Labor never worked out that if you removed a sociopath from the prime ministership, what did they think he was going to do in return?

The leaks that derailed the Gillard campaign in 2010 and cost her majority government set the scene for the ensuing three years: hobbled by deals with the Greens and the independents, particularly over a carbon tax she’d said loud and clear before the 2010 election she’d never back, Gillard’s prime ministership became a war of attrition between her and Rudd. Even after Rudd had been comprehensively defeated and professed he would never return to the leadership, he remained a lurking threat, eroding Gillard’s support, depriving her of clear air.

On the other side of the chamber sat Tony Abbott, with his colleagues strongly united behind him, his frontbench (however wretched, with the likes of Kevin Andrews and Bronwyn Bishop on it) unchanging.

Where Labor was most successful with voters was in its big picture, Labor-style reforms. Voters backed the mining tax, however badly implemented. They backed the National Broadband Network. They backed the Gonski review education funding reforms, and they backed DisabilityCare. All but one of those reforms has been adopted, partially or fully, by the Coalition. And that became another problem for Labor: the Coalition in effect said to voters “you can have Labor’s reforms without Labor’s chaos”. It proved a compelling argument, especially when the Coalition was able to simply stonewall Labor’s effort to portray them as budget butchers poised to slash spending. The Coalition even ditched a commitment to think about (and only think about) reforming the GST.

Restricted by Coalition “unity tickets” on big reforms and with Rudd only in the job a matter of weeks, Labor visibly wondered what to talk about in its campaign. Rudd’s lone ranger instincts kicked in and he began free-forming, conjuring visions of northern development, relocating naval bases and restricting foreign investment. Eventually sanity was restored and by the time of the campaign “launch” Rudd was back on the theme of jobs, but Rudd’s, and Labor’s, numbers were in decline.

Still, Rudd has done the job that he told Labor MPs he could do — “save the furniture” — in contrast to the huge defeat it looked likely Gillard would lead them to. Courtesy of the return of Rudd, and the New South Wales Liberals’ ongoing problems in western Sydney, the promised slaughter in NSW hasn’t eventuated, and Queensland may yet prove safe for all Labor MPs — although the touted swing to Labor that Rudd was supposed to deliver never happened. There were few in the Labor caucus who thought Rudd could actually win, and he hasn’t. But many still have their jobs partly thanks to him.

Rudd has also done the right thing and said he is now leaving the leadership. There can be no more returns for Rudd, even given his colossal ego. He must leave politics during this term and draw to an end the extended period of high highs and low lows he has inflicted on his party.

Yes, Labor managed the economy well if you consider that borrowing over 300 thousand million dollars and spending it on essentially non productive trinkets and more paper shuffling bureaucrats is good management.

Such profligacy is, in lefty parlance ‘unsustainable’? The interest bill alone could provide the kind of reforms that Labor like to announce but are unable to fund.

Labor have always been economic vandals, pure and simple. Good riddance to the wastrels.

Gillard could have made the hung parliament work if she focussed on connecting with the public.

Instead Labor were led around by the nose by Abbott when all they needed to do was ignore him.

If Gillard and Swan had of connected with the public (for example, did they ever describe how the NDIS actually WORKS??!*) then Rudd wouldn’t of had a platform to return on.

*hint its a voucher system

No one in the Labor party will feel safe until Rudd actually resigns his seat. For any sane politician, the sort of defeat Rudd has just endured, would make a “dignified” retirement in a couple of months a foregone conclusion.
But Rudd’s not exactly “sane”.
Last night’s bizarre performance at his “concession speech” was downright surreal.
Hopefully Julie Bishop will find him a nice job somewhere out of the country.

You guys are dreaming if you think it’s all down to some clever politicking and a disciplined coalition team.

$300bn in debt is a big price to pay for continued economic growth and even if it was the best policy, voters are looking for some fiscal responsibility going forward and they don’t see it in Labor. Comparing us to Europe in like suddenly taking out a big mortgage and comparing yourself favourably to the guy down the road suffering a mortgagee sale.

But Labor’s real problems began on 23 June 2010 when a group of inside powerbrokers decided they knew better than the electorate and that the prime ministership was a privilege they were empowered to handle and bestow as a reward for loyalty. The rot set in then and to blame Rudd for undermining the subsequent administration is like complaining about being shot by someone you’ve just stabbed in the heart.

Did anyone notice the speed with which Tony Rabbott got rid of his family for his victory speech? It was a poor reward for the family that worked hard to elect him.

Of course they are all female and we know what Abbott thinks of women.