Don’s party. Coalition fans can look forward to rowdy drinks tomorrow night, while Left-leaning readers may be crying into their black and tans. But will anyone have as much election-party fun as those cats at the Department of Prime Minister and Cabinet yesterday?

Once every three years, Cabinet documents are recalled, IGBs are written and avatars are sourced from Pandora in preparation for the biggest event of the election — the Caretaker Cup!

Come down to the Amenities Room at 4pm on Thursday 5 September to support your Division’s team, have a beverage and buy a raffle ticket for your chance to win some excellent bottles of wine and a hefty meat tray (see flyer). The bar will be open from 4pm and Happy Hour will follow!

If you would like to enter a team in the Caretaker Cup, form a team of four and register with xxxx by COB 2 September in order to participate for fame, glory and a magnificent trophy. Team costumes are encouraged, but entirely optional.

If you enter a team, you will compete in the following rounds:

Register your team now for what will be the most fun this Department has ever seen. 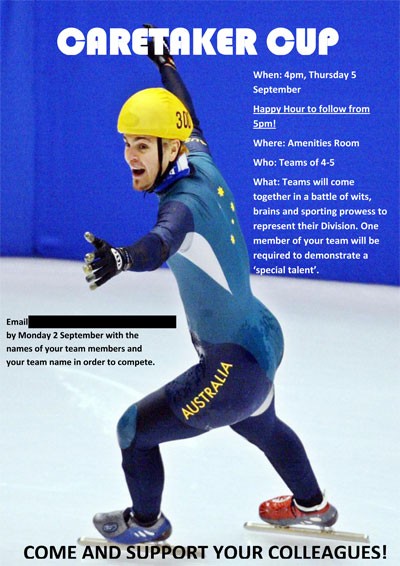 Now, if we were the Daily Telegraph we’d put you on the front page for “shamelessly wasting taxpayers’ money” etc. But we’re not, so we say: bottoms up!

F-cking idiots. Lefties raging at the dying of the light have been enjoying the pro-Labor dontbeaf-ckingidiot.com, which contrasts ALP and Liberal policies on key issues in an, er, pithy manner.

The site went live at 2am on Wednesday. The site’s creator, Jesse Richardson, has now issued a media release claiming the Coalition’s lawyers are onto him (click on the image below to read it):

Judge Crikey’s verdict? The site is pretty funny, it’s satire, it’s opinion — and it’s broadly factually accurate. Leave this guy alone. If you don’t like his site, make a better one yourself (bangs gavel).

And the Walkley goes to … there’s been some good media coverage of the election, but Tips reckons the top prize goes to … you. Since the election was called, Crikey readers have flooded our inbox with tips, gaffes, sightings, inaccuracies and breaches of the rules. We’ve had people from Perth to Tassie to Brisbane being the eyes and ears of Crikey. Here’s a favourite that landed in our inbox yesterday — it was snapped out a car window by a reader in Geelong. 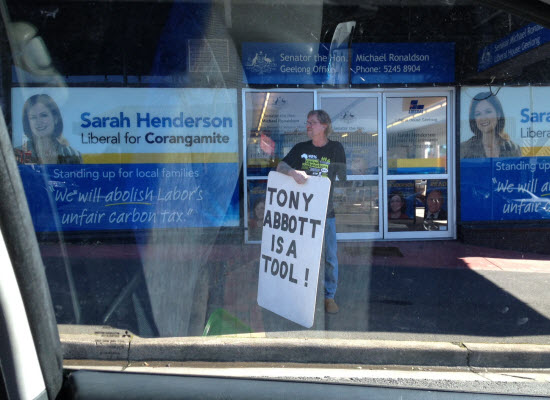 Academic strikes back. You may have noticed the Coalition’s attack on what it describes as grants for “futile research” (er, we didn’t think it was government’s role to cherry-pick who gets academic grants, we thought that was the experts’ job). One VC has struck back:

I was personally distressed to see that the work of one of our academics was on a list of topics unfairly criticised today in a Liberal Party press release, which has been reported in the media.

The academic is globally recognised as amongst the very best in the world in his field.

I want to reassure you that we will do all we can to help the federal government understand the importance of university research across all academic disciplines, and the value of the robust peer-review process at the heart of our research funding system.

Michael Spence
THE UNIVERSITY OF SYDNEY

IT woes at Queensland Health. We continue to hear tales of problems with Queensland Health; payroll was outsourced, which had its problems, and we now hear the bureau is outsourcing its IT. “Will definitely save money, but when the phones and the computers crash in the State’s Health system, the payroll problems are going to look like a picnic in comparison,” one mole told us.

Foxtel wobbles. Yesterday we told you that subscribers are ditching Foxtel due to concerns of political bias from part-owner News Corp. Like the good journalists we are, we went to the company for a reply and quoted it thus:

“Foxtel director of corporate affairs Bruce Meagher told Crikey: ‘I can assure you that there has not been an increase in customers cancelling their subscriptions due to debate about News Corporation. In fact churn is at historically low levels.'”

An insider passed on this comment to Tips: “The quote that ‘churn is at historically low levels’ is nonsense. In fact churn is at the highest it’s ever been. Foxtel has more customers moving out the door than it has moving in.” Time will tell.

Memo to PM: resolution status of attorney-general and minister of defence