Most media outlets have called the election for the Liberals -- despite Joe Hockey's sweaty performance and Malcolm Turnbull's internet filter blunder.

Campaign reading. So the costings finally arrived and, says Laura Tingle in the Financial Review, “it transpires the real reason for all the melodrama and secrecy about the Coalition’s costings and savings wasn’t because it had plans to take the axe to the budget, but because it didn’t”. Behind the paywall in “Coalition manages to pull a swifty on savings and spending“, Tingle explains that the totality of the Coalition’s spending and savings plans show nothing more than an extension of the same window dressing and relatively uncontroversial cuts Labor has pursued as its revenue has has slid away in the past three years.

In The Age, Waleed Aly reckons “Labor wins the debate, Abbott eyes the prize” with the Coalition leader being brutally efficient in adopting Labor policies he once argued vociferously against — and all with a straight face.

… the grandest, most Damascene conversion has come on fiscal policy. For years the Coalition has held Labor at gunpoint, demanding a return to surplus as some kind of litmus test for good government. For years, and for reasons unfathomable, Labor has played along. Having taken the perfectly defensible Keynesian path of running a deficit to stimulate the economy during a global recession, it became so obsessed with proving its deficit was temporary that it simply forgot to argue its case. …

Rudd can argue all he likes that Abbott will cut the economy to shreds and plunge it into recession but he has two problems. First, this contradicts everything Labor was telling us when it insisted it would find whatever cuts were necessary to deliver that surplus. Second, Abbott has freed himself from the shackles of finding a surplus, thus allowing him to shelve spending cuts until there’s no danger of a recession. He has manoeuvred this beautifully, as Labor should have done from the start.

All this is a testament to the brutal efficiency of Abbott’s opposition.

Analysis of the campaigns sees Jim Williamson in the Fairfax compacts point to “Happy families prove a winner for Coalition“.

[The Coalition] has embedded itself in the Australian psyche as the party of the working family, and a stable and better resourced family at that.

Abbott has adroitly positioned himself at the heart of this more functional family that will take us to a more secure and productive future. Thus we are bombarded daily with compelling images of Abbott “nested” happily within his own family, netball teams, or brushing shoulders with working and business comrades.

And for a final prediction — Dennis Shanahan’s “Win or lose, it’s Tony’s triumph” sums up the respective campaigns.

Whatever happens tomorrow, Tony Abbott has “won” his second election campaign in a row against two Labor leaders who underestimated him and thought him unelectable.

While there was a natural tightening in the polls after Kevin Rudd’s launch and as Australia gets closer to election day, there is no doubt the unpopular Liberal leader, scorned for a lack of “people skills”, is expected to win against one of Australia’s most popular prime ministers, renowned for campaigning skills and domination of the 24-hour news cycle and social media.

Our campaign honour board: And the winners are Tim Colebatch and Laura Tingle. 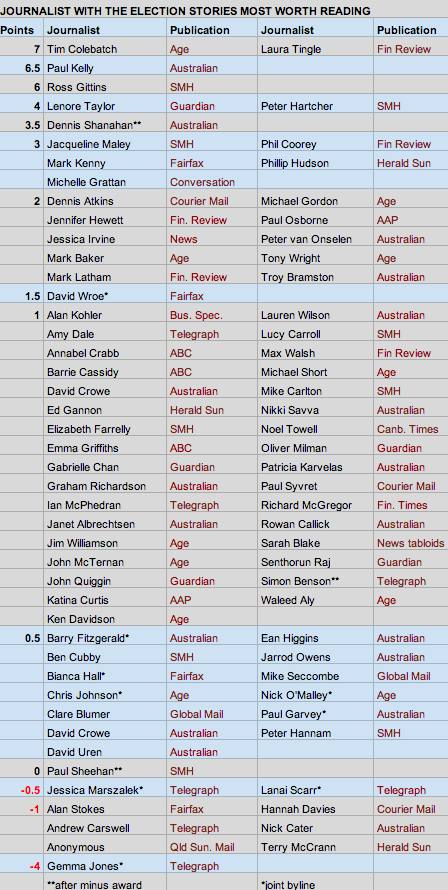 Other views: blogs and tweets of note. A funny thing happened on the most-read list last night. A political story made it to number one on news.com.au and, what’s even stranger, it put the Greens in a favourable light.”Greens slam Coalition’s $40bn plan” the headline read. Congratulations must go to the party’s dedicated followers for clicking so hard and often to make this near impossible event happen. There was not another political story in the top 10.

The last word from the Sydney Telegraph’s letters page:

And because at Bites we try to be balanced at least some of the time, this from the Cairns Post’s TXT Post: 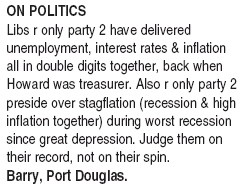 And to get you started thinking again about the post-election real world:

Campaign listening. For the last morning of this campaign note I have returned to my normal morning radio home of ABC News Radio. I’m a fan of Marius Benson’s polite but firm style of interviewing and there’s not much on the significant news front that this program misses.

This morning: the hidden agendas “revealed” by the changes in the Coalition’s internet filters policies; one of those rare updates about the whereabouts of Nationals leader Warren Truss; Andrew Robb confirming that he expects a Coalition majority by warning there could still be a hung parliament and a majority in the Senate is needed; Anthony Albanese explaining that when you are on a satirical show like the The Hamster Decides you give satirical answers and that he doesn’t really believe that Labor can’t win tomorrow.

The nightly television news. Luckily for Joe Hockey he looked so crook when delivering his long awaited “final” report on Coalition policy costings that only the most biased television viewers would have seen his prolific sweating as a sign of an embarrassed man with something to hide. As for the rest it was a predictable parade of fluoro vests.

Political TV cooking. So the Rudds are a close-knit family. All major decisions by all members, we learned on Kitchen Cabinet last night, are made after joint consultation. Including, clearly, the cooking. Just as Tony Abbott needed the guidance of daughters before barbecuing steak and a salmon cutlet the night before, Kevin Rudd needed help with the chocolate cookies. This really has been a family election.

Annabel Crabb summed up her interviews with the leaders saying it was Mr Rudd who remained an enigma. “I asked him about regret — I really enjoy asking politicians about the nature of regret because you can be affected by such random circumstances, small things balloon into catastrophes. And he told me he didn’t regret anything because all the big decisions he talked through with his family and it was impossible to regret anything in which they were involved. That’s the one thing that really comes across with Kevin, his closeness and reliance on his family. That is really part of his being.”

The daily election indicator. Just the slightest little upward tick for Labor in our final Crikey indicator for the campaign. Labor rated a 5.5% chance of victory, the Coalition 94.5%. And to keep hope alive in the breasts of Labor Party supporters, that 5.5% chance means that once in every 18 elections or so with the opinion of the pollsters and the punters being what they are this morning, the underdog would win. 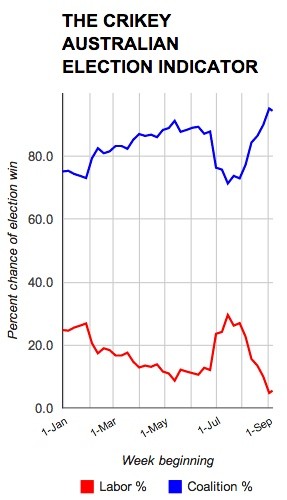