Worldwide markets continue to show signs of improvement, as does Australia's manufacturing sector. 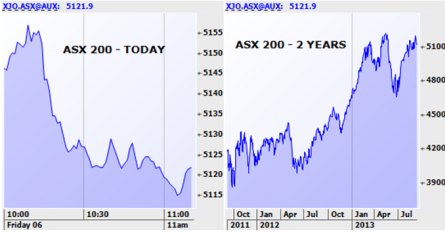 The market is down 20 points. The Dow Jones finished up seven. It was up 57 at best and down eight at worst.

Gold price down another $17 to $1373 on suggestions that the US Congressional vote to take military action is not a foregone conclusion with a large number of Democrats undecided.

More strong economic numbers in the US — factory orders ahead of expectations, ADP Employment number was in line with expectations (it is a private sector pre-cursor to tonight’s official jobs numbers), the ISM Services index was stronger than expected (best since Jan 2008) and weekly jobless numbers were better than expected.

Central bank meetings from the ECB and Bank of England show no signs of easing their bond buying programs or tightening policy anytime soon and helped all European markets higher. Mario Draghi (ECB President) also hinted at dropping rates even further and utilising the LTRO program if necessary (they haven’t actually used it yet).

Bonds fell for the 6th session on the strong economic data — the 10 year bond yield up 10 basis points to 2.997% and up 30 basis points in a week — the 30 year rate also up to 3.885% — both are at over two year highs now which threatens the housing market recovery and may delay the tapering decision.

European markets mostly up. Small gains on the back of dovish central bank meetings.

US economic numbers due out tonight: