It's election eve and that means endorsement day for the nation's big newspapers. Only one paper -- The Age in Melbourne -- is backing Labor.

The verdict is in: the nation’s newspapers, including both News Corporation Australia and Fairfax titles, overwhelmingly endorse Opposition Leader Tony Abbott as the next prime minister. Among the national and metropolitain newspapers, only The Age in Melbourne backs Labor for re-election … 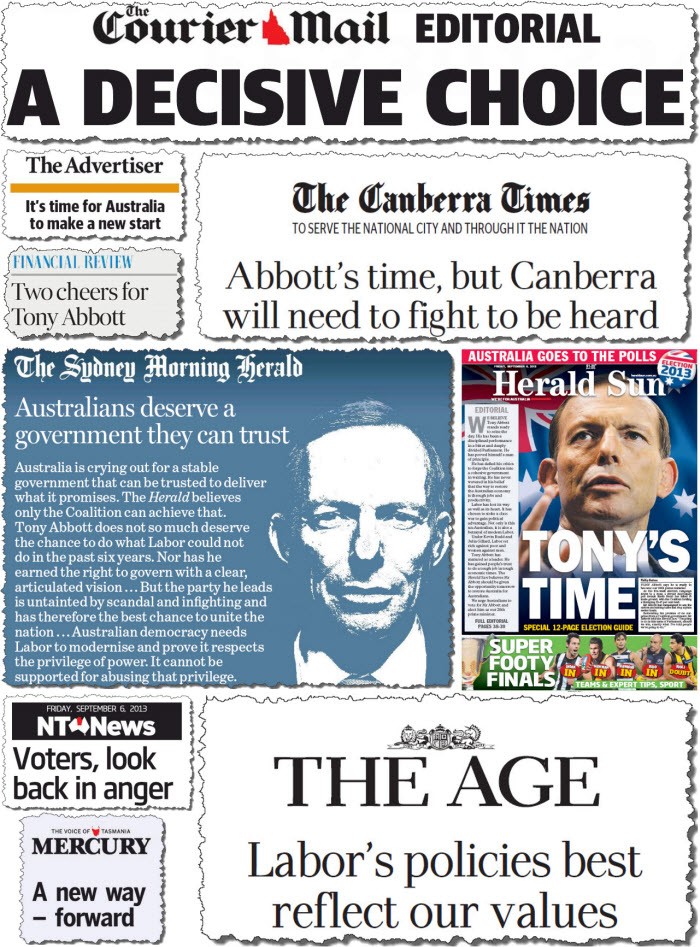 “A change should restore normality after more than three years of directionless minority government and leadership upheavals. This political instability has undermined the business confidence that Reserve Bank governor Glenn Stevens warns is critical as the mining boom recedes. A strong mandate at the top, especially for a government getting a grip on its own finances, will lift business resolve. That by itself is a good reason for The Australian Financial Review to conclude Australia’s prosperity would be better served by a Coalition government.”

“The Australian believes Mr Abbott is capable of governing in the interest of the nation, including its indigenous population. His commitment to introduce an amendment recognising indigenous Australians in the Constitution is matched by a pledge of practical action in education and employment. The vital national task of reconciliation will not be completed in a term of government, or even in a decade. By making practical achievement in this field a mark by which he expects to be judged, Mr Abbott has inspired hope for the future.”

Brisbane’s Courier-Mail says Australians have had enough of Labor’s in-fighting:

“This election is a chance to make a break with a period of government and parliament which has disappointed most Australians and caused division and rancour. The previous election was held in extraordinary circumstances, occurring just weeks after a ruling party deposed a sitting prime minister. Now, three years later it has happened again and the public no more owns the decision taken behind closed doors by the Labor Caucus in June than people did when Julia Gillard took power.”

Fairfax’s Sydney Morning Herald gives an unenthusiastic endorsement for Abbott, noting the paper believes many of his policies — including on broadband, paid parental leave and asylum seekers — are “unfair and a threat to national progress”. But the SMH, which backed Labor in 2010, concludes:

“Voters should not reward Labor before redemption, nor reward those who owe their influence to factions and betrayals of trust that have marked the past six years. Labor under Kevin Rudd in 2013 is not offering a stable, trustworthy government on which Australians can depend. The Coalition under Tony Abbott deserves the opportunity to return trust to politics.”

News Corp’s Daily Telegraph showed its skirt early in the campaign with a front-page editorial imploring voters to “Kick this mob out”. The Tele makes the same argument today:

“Labor’s campaign continues to reveal the government’s selfdestructive nature. By contrast, Abbott’s campaign shows a party and a leader advancing confidently and with calm authority towards power. A Coalition win on Saturday should immediately lead to action, especially by providing a shot in the arm for business and investment. Australia genuinely does need a new way. But the men and women who are best able to deliver it come from the Coalition.”

In Melbourne, The Age wears its progressive views with pride:

“As our readers know, we support Labor’s national broadband network strategy, its commitment to increasing the superannuation guarantee levy, its Gonski schools funding plan, and its shift from a carbon price to an emissions trading scheme. We also support the deal it forged between business and environmentalists that led to areas of Tasmania’s western wilderness being added to the World Heritage Area. In our view, these programs are initiatives towards generational change. They are visionary, forward-thinking and nation-building, not gimmicks devised to meet a three-year election cycle.”

“Mr Abbott is on a course for change and has sensed the mood of the Australian people. His pledge to abolish the carbon tax will relieve business and households of an everincreasing burden. His decision to end the mining tax will remove another impediment to jobs and productivity. His multi-faceted policy to stop the people smugglers’ boats is soundly based and proven.”

“When Tasmanians go to the polls tomorrow we will be voting for a prosperous nation with jobs aplenty and cheaper living costs. We will be voting for a mood that will reinvigorate national confidence, reignite opportunities, kick-start construction industries and provide jobs now and into the future.”

Adelaide’s The Advertiser takes a cricket bat to Labor’s “messiah”:

“The Labor Party under Mr Rudd appears to offer only more of the same chaos and disunity. He has failed to construct a compelling case for re-election. If, as polls suggest, Mr Rudd is defeated tomorrow he should leave politics for good. He’s proven to be a divisive and destructive force who too often places personal ambition in front of party and nation.”

“The level of dysfunction, incompetence and poor judgment that has characterised affairs in Canberra should make the decision an easy one. Put simply, it’s time for a change.”

Up north, the NT News doesn’t hold back:

“Territorians cope with a lot compared to the rest of Australia. Searing heat, torrential downpours, cyclones and the tyranny of distance. One thing we cannot, and should not, have to cope with is when a government — to use a favourite Territorian term — goes troppo. The Labor Federal Government has gone troppo. And that’s being kind. It has lost the ability — and the right — to lead.”

Papers run by Murdoch and Corbett. Hardly surprising. I think there’s going to be a lot of egg on faces tomorrow, when it’s not a landslide. And it may, may, be a labor win.

This is not based on preference, or even bias. Mr Abbott has had a disastrous campaign. Jaymes Diaz, refugees clogging the roads, baddies versus baddies, hockey’s bizarre costings, turn bulls hash of the discredited Internet filter. I don’t think a week has gone past without some major gaffe. Not that labor has had a great mainstream campaign, in any case. Rudd has been defensive in the mainstream media, instead of treating it with the contempt it deserves.

Mr Abbott may win, but don’t expect the landslide the biased, unethical, dishonest press is touting.

A bit much for the MSM to be plumping for stability when it has done a fair bit for instability itself with incessant pimping of “leadership crisis” stuff.

Yes I am appalled by the msm’s role in all this. The last straw – SMH editorial today. The fitst thing you encountered this morning on the smh website. Unbelievable.

Mark the date and page for posterity.

Murdocks propaganda news would leave the soviet unions Pravda to shame. Any dictator would be jealous of Murdocks News Ltd achievements.