WHO WON THE DAY ON THURSDAY?

Bernard Keane, Crikey Canberra correspondent: A win for Labor, at the death, courtesy of a complete and utter debacle from the Coalition on its on-again-off-again, opt-in-opt-out internet filter that made Malcolm Turnbull look a prize goose and raises real questions about how organised the Coalition is, particularly given Liberal MP Paul Fletcher initially explained the policy in detail and defended it. In campaign gaffe terms, it was up there with Peter Shack owning up that the Coalition didn’t have a health policy in 1990, and if it had been Labor that had perpetrated it, it would have been the subject of acres of scathing copy in News Corp papers. The ACTUAL policy isn’t much better — a subject Crikey will be returning to.

Richard Farmer, Crikey election analyst. Disciplined to the end, Abbott skilfully removed himself and his travelling press pack to the deep blue skies in an aircraft until it was too late for any pesky television journo to ask him an embarrassing question about policy costings. If they can’t ask you questions you can’t make mistakes so Abbott gave the Coalition a win.

Since the campaign started, Crikey has kept track of every promise to spend or cut made by the two major parties. As the campaign wraps up, here is our final Cash Tracker. It’s striking how similar the major parties are in net terms — there’s less than $6 billion difference between them in terms of what they’d spend (and many of these promises go over a full four years). In an annual budget of well over $300 billion, it’s an economic unity ticket.

As you can see, the ALP has ended the campaign as net savers — Labor has kept its promises modest, and is saving more than it has spent — while the Coalition is about a billion in the red. Here’s the net result, updated as of this morning:

Labor has run a small-target campaign, making low-cost promises at a local level. A million dollars here for an oval, a hundred thousand there for a town square. Meanwhile, ALP savings have been comparatively large, for example the much-publicised Fringe Benefits Tax changes.

The Coalition has made some big-ticket spending promises, including generous road spending and paid parental leave. But the razor has mostly stayed out of the spotlight, except for cuts in foreign aid and public service jobs.

As for whether we can trust either party’s costings, as detailed in the Cash Tracker — only time will tell. Here are the most recent spending promises …

Crikey will have reporters on the ground with the wanna-be PMs as the results come in tomorrow night; watch our live blog for up-to-the-minute posts.

Kevin Rudd: The Prime Minister will be watching the results flood in from his home state of Queensland.

Tony Abbott: The Opposition Leader is also sticking to his home turf, glued to the TV in Sydney.

Christine Milne: The Greens leader will spend her last day campaigning in Tasmania, and will remain there for the verdict.

If you’ve been keeping track, then you’ve already seen the famous “Hot Albo” pic. But now that the Deputy Prime Minister himself has posted it on his Facebook page, how can we ignore it any longer? So as the campaign draws to a close, here once again is a young and surprisingly s-xy Anthony Albanese. 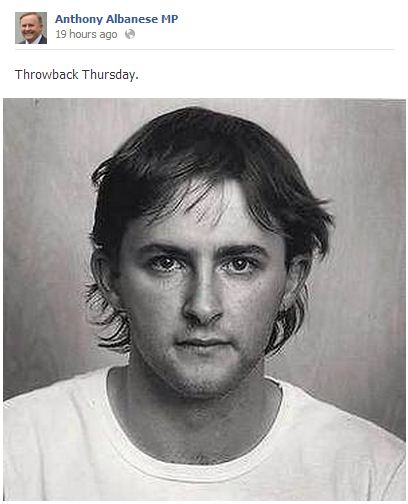 Remember when his name was Kevin, he was from Queensland and he was here to help? It might have been six long years ago, but even as the polls show he could soon be taking his final bow, the Prime Minister is still here to help. In his own little way. 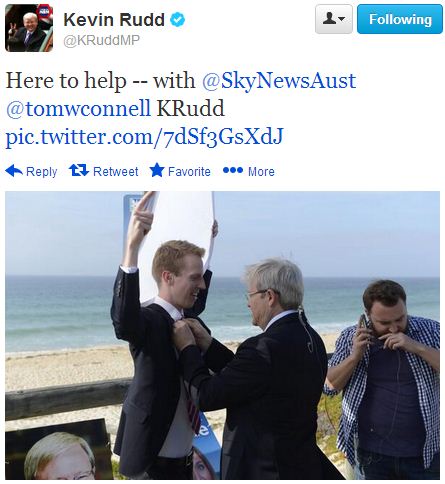 About the only thing between them is a sheet of Murdoch’s dunny paper?

I wonder how many of those who vote. Will fill in their ballot papers and then forget about politics for another three years ? Edward James