Tom Switzer on political ventriloquism and the pace of speechwriting

Tony Abbott is good off-the-cuff but his stump speeches are dispiriting, according to former Liberal Party adviser Tom Switzer. He talks to Crikey about the art of political speechwriting. 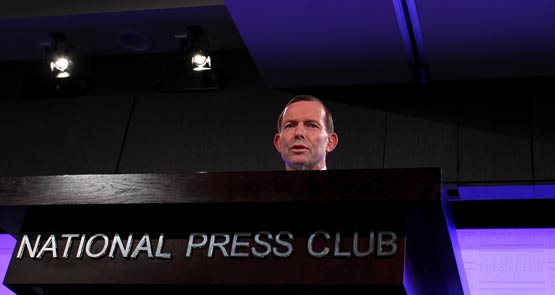 “I think one of the worst features with all sides is that they are so inarticulate, they’re rhetorically challenged,” says Tom Switzer.

When Crikey spoke with the conservative-minded editor of The Spectator Australia about the use of political language in this election, the Liberal Party’s campaign launch had occurred a few days before. Though he is critical of the use of speechwriting by both sides, he is particularly frustrated with Abbott’s address. “That was not him, I could just tell, it was a laundry list of policies that some second-rate speechwriter has just complied. It lacked the philosophical heft that Abbott is capable of producing,” he says.

“I haven’t spoken to [John] Howard about it but I suspect that he would say that the speech lacked a sort of philosophical coherence. And unfortunately you could say the same thing about the Labor Party these days.”

Switzer certainly understands the difficulties and frustrations surrounding speechwriting. He’s known for his journalistic work, as opinion editor of The Australian newspaper until 2008, an editorial writer at The Australian Financial Review, and an assistant editor at the American Enterprise Institute in Washington DC. In 2008 he worked as senior adviser to then federal Liberal leader Brendan Nelson until the leadership vote that saw Malcolm Turnbull take over.

In his time as advisor, Switzer wrote several speeches for Nelson, yet controversy arose when an edited collection of speeches from Liberal figures was published, Peter van Onselen’s Liberals And Power. Switzer, it was revealed, had substantially authored the chapter under Nelson’s name, yet had recycled parts of the essay without attribution in several of his own pieces for The Spectator.

In an interesting piece following the controversy, Switzer examined the art of political ventriloquism, and the historical difficulties surrounding speechwriting and authorship, quoting a line from Whitlam’s speechwriter Graham Freudenberg in which Freudenberg “was genuinely shocked that some people were genuinely shocked ‘that some politicians don’t actually write their own speeches and articles’“.

Are Australians genuinely shocked? Is there suspicion about politicians’ use of speechwriters? “Well, I think if you read some of Menzies’ letters and articles he wrote after he retired from office in 1966, he was scornful of speechwriters, but of course he was from a different era when the demands — daily radio, television, cable, internet, all these interviews — were different,” Switzer said. “The pace of politics has changed dramatically. It’s so relentless now and politicians don’t have the time or inclination to write their own speeches.” Switzer believes there are rare exceptions, including Mark Latham and Tony Abbott.

Abbott — a Rhodes scholar and author of political manifesto Battlelines — is capable of writing in a more powerful way, yet has been incredibly effective with three-word slogans. Is the change in the media landscape making political oratory obsolete, that politicians know media outlets will only pick out a 30-second grab and therefore feel there’s no point crafting a long speech?

“Whatever you thought of [Robert] Menzies, [Gough] Whitlam, [Paul] Keating or [John] Howard, they unashamedly defended their causes, they made people want to believe them in spite of everything. And yet today’s politicians, I think largely because they’re so scared of not making gaffes in the time of this relentless 24/7 media and internet environment, they have not developed the art of selling their successes and putting a human touch to their failures,” Switzer asserts.

“Abbott for example, he’s an excellent parliamentary debater, I think he speaks very well on the stump, but it’s his scripted performances on great occasions which are a bit dispiriting. And again, it’s not just Abbott, it’s also [Kevin] Rudd and [Julia] Gillard, I’m criticising both sides. The oratory of Rudd and Gillard and Abbott lacks range, it doesn’t have any theatrical effects, it lacks humour.”

“… he’s [Abbott] an excellent parliamentary debater, I think he speaks very well on the stump, but it’s his scripted performances on great occasions which are a bit dispiriting.”

When Crikey asks Switzer about his experience of speechwriting for Nelson, he notes that he wrote only about four keynote addresses. “Of course, that [Liberals And Power] chapter, for which I got myself into trouble, that was really me, it wasn’t him, that was a mistake on my part,” he said.

“But I think if I could go back in time, I would’ve wanted to try to get inside his head and be more Brendan and less me, I think that’s an important lesson for any speechwriter — you’ve got to be the person for whom you’re writing the speech. But a lot of politicians on both sides don’t place as much emphasis on speeches these days and so it makes it very difficult for a good speechwriter to get much out of their job.

“I think you need to spend a lot of time with that person, you need to get inside their heads and what makes them tick and how they see the world, and the battle of ideas … that’s what made Freudenberg so special, because he became very close to the people for whom he wrote speeches, particularly Gough Whitlam and Arthur Calwell.

“The difference between Abbott and Rudd is that I genuinely don’t think Rudd has a philosophical conviction in his body, I think he’s all things to all people, and that’s ultimately why he’s in trouble. Whereas Abbott has very sound conservative convictions and principles, it’s just too bad that he’s not placing more emphasis on articulating those views in his public performances in recent times.”

Switzer notes that when he was opinion editor at the AFR and the Oz for the best part of a decade, every January Abbott would give him the transcript of the speech he delivered to the Australian Young Liberals Association. “It was always very sound, it was a philosophical statement of principles, about what Howard’s liberalism means in the context of Australian history, and ideology and philosophy. It was all his own work, but you see very little of that now that he’s the potential prime minister, probably because he feels that to win over the swing voters you’ve got to talk in terms of policy and not philosophy which will go over most people’s heads.”

In the Spectator piece, Switzer notes that Howard and Costello were skilled off-the-cuff speakers, and in research for this series of interviews, attempts to find speechwriters on the LNP side had been difficult — a Google search for Howard’s speechwriter brings up mostly obituaries for Christopher Pearson, also a writer for Abbott. Many of the classic Australian political speechwriters such as Freudenberg and Don Watson were from the ALP. Are speechwriters employed more frequently, or effectively, by Labor?

“No, I think it goes both ways,” Switzer said. “I mean there have been some very good speechwriters for Coalition leaders over the years; my friend and mentor Owen Harries who is now in his mid 80s, he was [Malcolm] Fraser’s speechwriter in the late 1970s early 1980s. He makes the point that it’s one thing to give a speech that outlines policies, unless it’s put into some broader philosophical framework and it’s spiritually uplifting, the exercise is pointless. So no, I think you have good political speechwriters on both the Labor and Coalition sides. Increasingly though, these days they’re just not taken seriously because of soundbites and getting out those cheap punchlines, that’s the disappointing thing.”

Switzer mentions Obama’s keynote addresses, which he describes as generally pretty uplifting: “He tries to put it in a broader framework, it isn’t just outlining policies. He’s a role model for Australian politicians and Boris [Johnson, London mayor] is the same in England.” The examples of Obama and Johnson, and their reception here, seems to suggest there’s an appetite for oratory that uses narrative.

“I do think that a good quality speech is still important, but the trends we’ve seen develop in this campaign may well be a harbinger for future campaigns, where it’s the cheap shots, the gaffes, and the visual images. To the extent that that is true, that’s a real indictment on public life in Australia,” he said.

“As someone who studies a lot of American history and politics, I still profoundly believe that a good speech can really make a difference. We saw that so clearly five years ago when Barack Obama ran for the presidency. Whether you’re a Democrat or Republican, liberal or conservative, there’s no question that his speeches were spiritually uplifting and I think it helped make his campaign resonate, not just in America but around the world. So I do believe that there is still a role for these big policy and philosophical speeches, but I’m clearly in the minority given that both parties seem to be focused on the sound bites and the cheap policy one-liners.”

All speeches should state their authorship, eg, ‘My campaign launch. As told to A Scribe’.

Switzer is a lightweight, you only have to look at his list of employers.The American Enterprise Institute? A ten year old could write the sort of rubbish they come up with.

Maybe he’s got an excuse? I wonder if you make more mistakes, writing, when you’ve only got the one (Right) eye?