Labor’s economic record: hits and (a couple of) misses

Labor is likely to leave office with a strong record of economic management -- albeit with some significant errors. Bernard Keane and Glenn Dyer run the rule over six years of Labor in power.

Labor’s stewardship of the Australian economy has caused, and coincided with, a series of significant changes that mean the Coalition will inherit a very different economy from the one it left in 2007 — if it wins on Saturday.

Inflation is a key achievement on this front. Like most other governments of developed countries, the Howard government left an inflationary boom that compelled the Reserve Bank to lift rates into 2008, but ultimately it was the financial crisis, higher unemployment and the more cautious consumers it created that has seen quarterly CPI falling from an average of 0.7% in the last five years of the Howard government to 0.6% during Labor’s term and 0.5% in the last two years. That’s despite the introduction of the carbon price.

An international comparison shows how Australia has managed to move through a resources investment boom without the traditional inflation boom that has accompanied all preceding resources booms in Australia — an unprecedented achievement for any government. Indeed, rather than an inflationary boom, Labor managed to get inflation below the levels it had inherited. 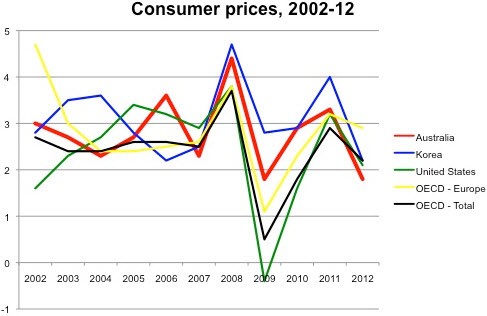 This in turn has meant that the Reserve Bank has had the capacity to drop interest rates to exceptionally low levels in order to provide additional stimulus to the economy. “Interest rates will always be lower under a Coalition government,” said John Howard. Wrong. 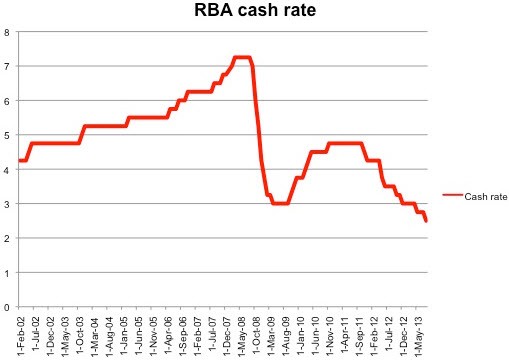 On employment, Labor inherited unemployment in the low 4s, and John Howard during the 2007 election expressed hope it could go into the 3s; it touched 4.0% in February 2008. The same month, unemployment reach its recent nadir in the Euro area, at more than 7%, and in Canada, at 5.9%. It had already started rising in the US. Unemployment remained low under Labor until the financial crisis hit hard, but as the comparison shows, it rose much less and began falling more quickly again than elsewhere due to Labor’s stimulus packages and the RBA’s emergency rate cuts. 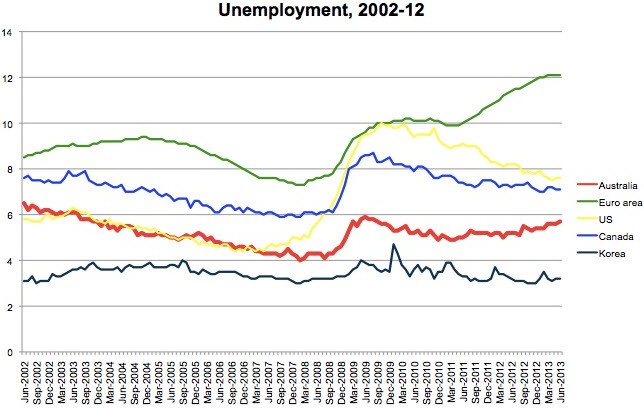 That remains Labor’s biggest triumph: keeping hundreds of thousands of people out of unemployment, with all the attendant budgetary and social costs (and the longer-term impact on participation and mobility). And more than 900,000 jobs created in the past five years has also been a solid achievement. Tony Abbott’s aim of creating 2 million jobs in the next decade is nothing but a repeat of Labor’s achievement — and given the growth in overall population, he (or his successors) will have to do better than that.

But where Labor has been less successful is in maintaining the Howard government’s strong participation growth, particularly among men, which appears to have peaked despite extensive participation-boosting efforts from Labor. Overall, however, Labor’s Fair Work Act has delivered a reversal of the recent decline in Australian labour productivity, with yesterday’s national accounts showing labour productivity growth for nine straight quarters, in stark contrast to declines or flat productivity under WorkChoices.

It has also delivered wage moderation outside those sectors where businesses were falling over themselves to poach staff from a limited talent pool. This week’s national accounts told us that real unit labour costs fell 0.1% in the year to June and are now 4% under the pre-GFC level. And contrary to arguments that Labor was too friendly to unions at the expense of business, the wages share of national income reached a 50-year-plus low in 2011.

The workforce now looks different, too. Health and caring services are now by far the largest employer of Australians. Retail was the biggest employer before being superseded by health. The decline of manufacturing as an employer has continued its historical trend, albeit with a more gentle gradient since the GFC. The housing boom-fuelled rise in construction tapered off well before the financial crisis, then Labor’s stimulus measures propped it up until the end of the First Home Owners’ Boost introduced a decline from which the sector has yet to recover. Meantime, the professional services sector has kept on growing, only briefly checked by the financial crisis; Australia may soon be an economy that employs more people in professional services than manufacturing. That seemed implausible when Labor entered office. 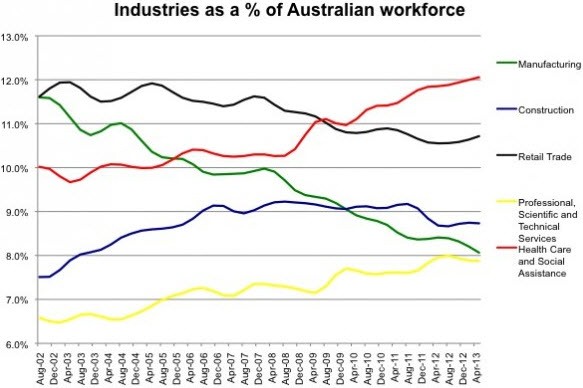 Labor’s stimulus measures were highly effective — probably the most effective stimulus package in the world. But they were expensive. Worse, when the financial crisis ended, revenue, which before the crisis had closely tracked government expenditure (the Howard government was forever handing back through tax cuts or handouts the proceeds of the first stage of the mining boom), suddenly fell away. Even when Labor slashed spending and its stimulus programs ended, revenue remained stuck at levels not seen since the Keating years. The years of high revenue growth of before the financial crisis never returned; instead, tax revenue growth remained sluggish, mired in a low-inflation, low nominal-GDP economy. And not just for the Commonwealth but all governments; even the boom state of WA is predicting deficits.

However, a real error by Labor, along with Treasury, the commentariat and just about everyone else, was to be fooled by the impact on commodity prices (coal and iron ore) from the big rains and floods in Queensland (and to a lesser extent in WA) in late 2010 through to early 2012. They boosted and then helped keep coking and thermal coal prices at or near record levels, and did the same to iron ore prices in the Chinese steel market. That in turn set off a chain reaction of over-confident estimation of mining tax revenues and export income by the government, and boosted business investment in both industries, which have helped cause a resources investment cost boom, especially in LNG.

Too many companies boosted their search for an investment in iron ore and coal in WA, Queensland and NSW, and when the LNG boom started, the rush to invest meant a corporate-led chase for scarce resources. With the cost cuts and cancellations of the past year, cost pressures are now disappearing from the resources sector, even in LNG. The absence of cost pressures from competing mines meant that BHP and Mitsubishi’s new $US1.4 billion Daunia coking coal mine in Central Queensland came in $235 million and several months under-budget.

Without the impact of the floods we probably would have seen a more staged expansion in iron ore and coking coal, thus allowing the LNG boom to proceed at a steadier, more cost-effective pace. And the overestimation of tax revenues (as well as underestimating the impact of carry-forward losses and depreciation of assets, much of it on mines that won’t make much in the way of profits for years to come) added to the government’s revenue problems.

The overall result was that the Commonwealth’s net position, which peaked in 2007-08 at nearly 4% of GDP, rapidly turned to net debt, which this year will reach nearly 12%. 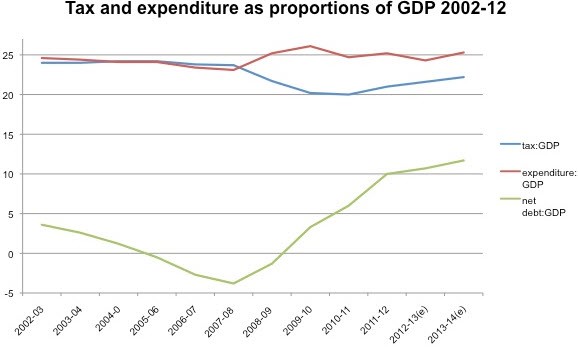 As has been pointed out endlessly, this is a fraction (in many cases a small fraction) of the net debt of most other developed economies, even ones such as Canada, to whom Australia has been compared, and the government still has considerable capacity to respond with fiscal stimulus to another slowdown. Indeed, Australia’s overall fiscal position was recognised in November 2011, when Fitch upgraded its rating for Australia to triple-A, giving Labor another unprecedented economic achievement.

In its handling of the financial crisis, and in its success in managing the end of the mining boom while maintaining a low-inflation economy with employment growth, Labor achieved two rare economic successes, ones that secured continuing prosperity. But the economy changed significantly as a consequence of it. The Coalition, which once claimed that all that was needed to restore the boom times of the pre-GFC era was their own election, will discover that at their leisure in government.

Yes, a good record. Presumably a Coalition ‘Commission of audit’ will ‘find’ much wrong with Australian Government finances. Then there’ll be the witch hunt over the tragic pink bat deaths which will be all the fault of the government funding the scheme and none of employer providing an unsafe system of work.

interesting to see the impacts of the car FBT is washing through the system, obviously not great numbers for the government nor car industry – obviously the FBT will be repealed in the coming weeks.

In fact, I suspect both Gillard & Rudd will not be remembered in a favorable light by historians.

The problem is that no matter how well the economy was run by Labor it does not seem to be registering with the public. I think Labor is seen to be full of poison and in house conflict which trumps any positive that can be bought forward. It is a shame the first spill ever happened as I think Rudd and Gillard, shoulder to shoulder would have been a formidable team.

@ Observation – whilst I don’t believe Rudd or Gillard are good leaders, or PM material for that matter, the ALP has done a disservice to the electorate by forcing the likes of Gillard, Swan et al to resign.

Despite an individuals political persuasion, is it not in the best interests of the electorate to have high quality candidates regardless of left or right stance?

It is sad that high quality candidates are forced to resign due to inhouse factions.

I don’t think that either Gillard or Swan were pressured to resign. I think they resigned for the good of the party because they did not want to continue an internal divisive war such as Rudd conducted since he was deposed or indeed that cruelled the Liberal party during the contest between Howard and Peacock.