Bernard Keane, Crikey Canberra correspondent: At this point every day without a major disaster for Tony Abbott is a win, because that’s the only thing that will make any difference to the Coalition’s looming victory. So, a win yesterday for Abbott. And yet he continues to exhibit a weird fixation with women’s s-xuality in politics, with his off-the-cuff joke that people should vote for him because his daughters were “not bad looking”. Creepy and un-prime ministerial.

Richard Farmer, Crikey election analyst. “It’s only the youth that can possibly save us” was Rudd’s theme again. Get them out on those mass morning walks with the leader; hope the selfies are posted with an accompanying note to remember to vote ALP. I’ll award the day to Labor because I’m charitable.

Dennis Glover, veteran Labor speechwriter and fellow of Per Capita think tank: When you’re entering the final round many points behind, you need a knock-out punch. Every day that Labor doesn’t land it is therefore a day the Coalition wins. Labor hasn’t performed badly in recent days, but with post-election leadership now being openly discussed, the fight seems all but over. The public apathy about the Coalition’s cynical ploy of releasing its costings late and delegating the dirty work to a “Commission of Audit” (yes, you can laugh now!) shows the Coalition has read the electorate’s utter incomprehension about spreadsheets. This election is about the mood of the electorate, not about competing sets of numbers. When will the Labor Party learn that the era when elections were about double-entry bookkeeping is over?  At the next election it should try believing in something and having a story to tell about the future of the country. Wednesday is a draw — and that means the Coalition won it.

The Coalition will be releasing its policy costings this afternoon in Melbourne, and Crikey is tuned in to bring you all the important points. We’ll bring a full update in tomorrow’s Cash Tracker. Here’s the current state of play on the major parties’ promises to spend (and cut) made during this campaign — Labor remains a net saver, while the Coalition is a net spender. But it’s not quite over yet …

Here are the latest promises from the two major parties.

Kevin Rudd: has a busy day. He began his day in Canberra, going for a brisk walk around the beautiful Lake Burley Griffin with party volunteers. At lunchtime he’ll be speaking at the National Press Club, giving his final address before the election, and tonight he’ll be interviewed on 7:30 by Leigh Sales. You can also watch him on ABC Kitchen Cabinet tonight. But is his goose cooked?

Tony Abbott: Thursday started well, with news that Wendell the Psychic Croc had picked him as the election winner. Not giving in to hubris, Abbott started costings day in Brisbane at a traffic management centre.

Christine Milne: back in Tassie today, campaigning with Senator Peter Whish-Wilson. Later on she’ll head to Melbourne to help deputy leader Adam Bandt, in the fight of his life for the seat of Melbourne. They’ll hold a press conference responding to Rudd’s speech.

As the campaign comes to a close, there were plenty of contenders today: Clive Palmer claiming Rupert Murdoch’s estranged wife is a Chinese spy for one. But the dubious trophy has to go to Abbott’s message to Nine’s Big Brother housemates last night; he claimed his daughters were his “best assets” and asked viewers to vote for the guy “with the not-bad-looking daughters”. Lame. 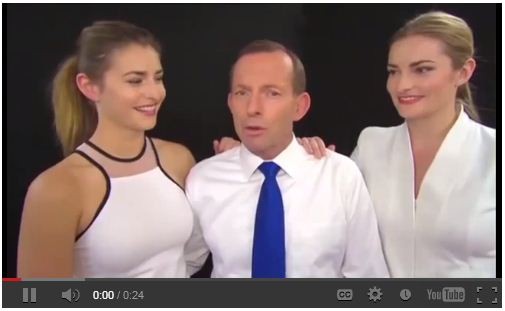 It looks like the Pirate Party has been busy in Queensland. Candidate for Forde (and former premier) Peter Beattie tweeted this vandalised sign of Kevin Rudd. As one tweeter noted, everyone loves a pirate … 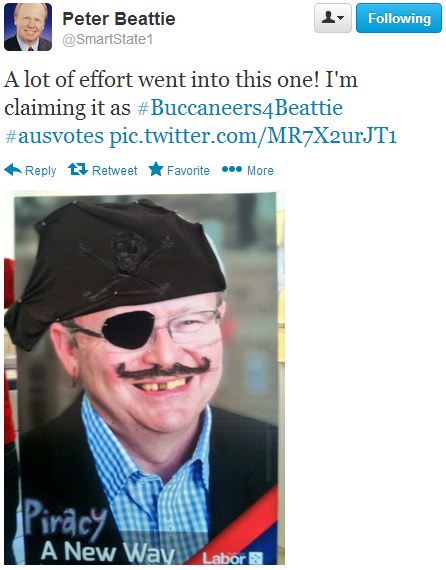